Once coherency had returned, I did some research and found out that the ghost pepper, or Naga Bhut Jolokia, is roughly TWO HUNDRED TIMES hotter than Tabasco sauce. And that it can be used as a weapon. Well, duh. 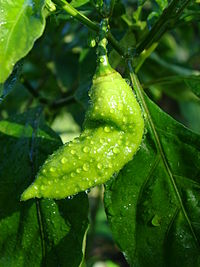 I thought I could handle spicy foods. Turns out I had absolutely no idea.
Posted by Brian Tashima at 10:54 AM