Welcome ("youkoso") to another in what is now undoubtedly going to be an ongoing series of posts detailing my Japanese-language-learning journey. 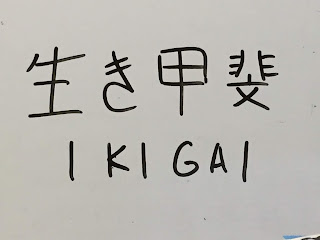 If you recall from Part Three, at the time I was seriously considering signing up for a continuing education course at the local community college called "Conversational Japanese II" (there was no "I", but fortunately I knew all the prerequisite words and phrases listed in the course description). Well, shortly thereafter, I stopped considering and actually registered. I was pretty excited about it, because while learning Japanese on my own has been fun, I was really looking forward to practicing and developing my skills with other living creatures besides my cats, who, to their credit, are pretty nonjudgmental when I mess up (which reduces the stress level), but does nothing for my actual learning.

Unfortunately, I was just notified that the class has been cancelled due to low enrollment. That leaves me to continue practicing with my cats for at least a little while longer. Some of our more common conversations go something like this:

or, when Mittens starts chewing on a plastic grocery bag:

So, yeah, hopefully I'll be able to find some other alternative fairly soon*. My learning journey has been going on in earnest for well over a year now, and while I've made progress, I do feel like I'm at a bit of a plateau. Let's take stock of what I know at the moment:

- I can read all the hiragana and katakana (Japanese syllabary) characters
- I can write in hiragana, but my katakana is still a little rusty
- I know maybe around 50 kanji (those complex logographic) characters. In contrast, my daughter knows about 280 (most native Japanese speakers know ~2000 of them).
- My vocabulary is probably around 500 words or so (most native Japanese speakers' vocabulary is around 10,000 words)

To my credit, I did manage to decipher a random ad that I saw on a Japanese-language website that said, in hiragana/katakana/kanji, "Honto ni, eigo na no, kore?" ("Is this really English?") It helped that there was a contextual clue (below that sentence were a bunch of English slang words like "gonna" and "juwanna"), but still, I was pretty proud of myself.

* and I just might have, details to come
Posted by Brian Tashima at 6:44 AM No comments:

I've noticed that a lot of anime shows have titles that end in either one, two, or even three exclamation marks. There are a few articles floating around the Internet that claim to have one explanation or another for this phenomenon; I've read some of them and, for the most part, they seem pretty tongue-in-cheek to me. I think the creators of these shows (and the manga that they're based on) are just trying to inject a sense of excitement into the whole deal, kind of like the content-naming equivalent of a street vendor shouting at passerby to get their attention. Anyway, purely by coincidence, I've been watching a few of these lately, such as: 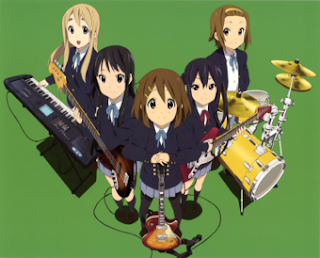 This just might be my new favorite anime of all time. A slice-of-life comedy about a group of high school girls who form a band but hardly ever practice, it's funny, lighthearted, and a great portrayal of the beauty and power of friendship (even though the characters hardly practice, they hang out with each other so much and share such a strong bond that when they actually do play a show, they sound fantastic together). Just a few of the things that I love about it include:

- It's sweet but not saccharine; cute but not nauseatingly so

- It aces the Bechdel test over 99.9999% of its entire runtime, the only rare exceptions being when the girls bug their teacher/faculty advisor about her love life (or, more accurately, lack thereof). Yes, it's set at an all-girl school, but even so, the characters are too busy with their studies, music, and other aspects of everyday life to think about dating. Very refreshing.

- The musical instruments are drawn with precise and accurate detail, and when the characters play them, most of the time their hand movements actually look like they're playing what they're supposed to be playing. As a musician, I really appreciate this.

- Speaking of music, the songs from this show are AMAZING. All of them. I mean, I know I've said that most anime shows have great theme songs, but these go way beyond that. Which, I suppose, would make sense for a show about a band. The songs are so good (and popular), the show even pulled a cool meta maneuver and had the voice actors for the main characters take a crash course in their respective instruments and put on an arena-packing live concert.

Two seasons and a feature-length movie based on the show are available, but trust me, that ain't enough. Seriously, I could just watch this thing endlessly. But I suppose, like Stereopony, all good things must eventually come to an end, and maybe that's what makes them even better.

Love, Chunibyo, and Other Delusions! 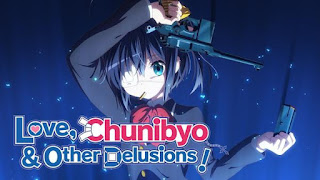 At first, you might think this is one of those animes about several cute teenage girls who all inexplicably like the same boring dude (yes, that's a subgenre), but thankfully, it's actually a delightful young-adult rom-com-ish show about a boy who is trying to put his "chunibyo" (basically, a state of mind where you really believe that you have special powers) past behind and a girl who is still stuck in that phase. It's humorous, adorable, and very touching at times - especially during the lead-up to the end of season one. I love love love how it portrays the characters' imaginary magical battles as something real before it cuts to the actual action where all they're doing is clashing umbrellas with soup ladles. Or ARE THEY??

P.S. I'm still in my chunibyo phase, thank you very much. 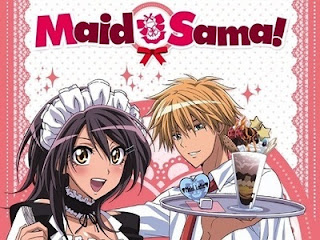 Another rom-com-ish show, this one is about a high school girl who is a heavy-handed class president by day and a waitress at a maid cafe - a totally family-friendly establishment, for those of you who don't know - by night. I've noticed that a lot of manga and anime have premises that employ a similar "contrast" setup, like Saiki K. (a boy with psychic powers who just wants to be an ordinary kid), One Punch Man (a superhero so powerful that he becomes bored with his life), The Devil Is a Part-Timer (Satan comes to Earth and finds himself having to flip burgers to make ends meet), and more. It's a pretty effective formula, if you ask me. 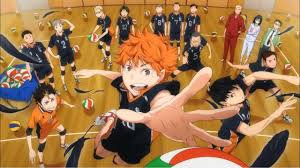 This show's title gets two exclamation points!! I guess maybe because simply calling it "Haikyuu" ("Volleyball") sounds too boring otherwise? Or maybe because nobody actually calls volleyball "Haikyuu" in Japan (apparently, it's called "ba-re-bo-ru")? Who knows. Anyway, the basic idea is that there's a high school boy who really loves volleyball but is shorter than your average player so he makes up for it with grit and determination (and some serious NBA-level hops). It goes further than that, of course, introducing new teammates and highlighting the ensuing high school-haikyuu-high jinks (insert groan here) as our hero's team attempts to climb up through the ranks and win a championship. If you like volleyball and/or sports movies, this is for you. 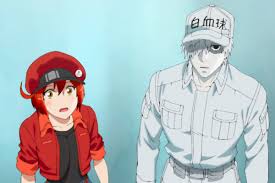 If I told you that this was a show about anthropomorphic cells living and working within a gigantic city that is supposed to be a human body, you might think it was some kind of educational program geared toward young kids (or maybe a Japanese adaptation of Osmosis Jones). Turns out, it is pretty educational - the scientific factoids are (apparently) mostly accurate - and platelets are represented by cute little children, but then when, say, the white blood cells have to battle an infecting virus, it erupts into these vicious bloody fight scenes that would seem more at home in a Quentin Tarantino film, creating a massive sense of cognitive dissonance. Needless to say, it's a lot of fun.

Anyway, there are a LOT more exclamation-mark-titled shows (Angel Beats! Food Wars! Durarara!!), but we'll save those for a future roundup post. In the meantime, should I change the name of the Joel Suzuki series from "Joel Suzuki" to "Joel Suzuki!!"? Uh, no.
Posted by Brian Tashima at 6:30 AM 1 comment: 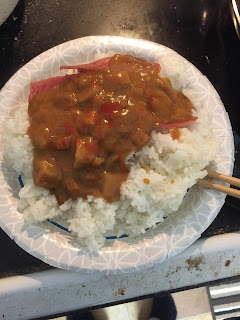 Happy New Year!
Posted by Brian Tashima at 6:09 AM No comments: