Hey, so Orycon was a blast! I was able to meet some fellow NIWA authors for the first time, which is always cool. Like last year, our booth was situated close to the entrance, so we were able to corral greet potential new readers and members as they came in and out of the dealer's room. 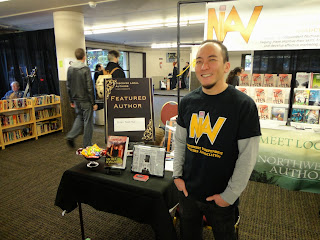 Tomorrow night, I'll be at the 2nd Anniversary Party for SW WA/OR Write To Publish at the Brickhouse in downtown Vancouver from 6-10pm. After a workshop presentation from group organizer and published author Linda Stirling, there'll be readings, pitch practices, and general debauchery.

On the music front, Second Player Score has been working hard in the woodshed, refining our sound, preparing to record some demos, and putting together some cool merchandise for y'all to spend your hard-earned money on. More details to come.

And also coming soon: the official release of Secret of the Songshell, the audiobook version!

Art's Quotes of the Day:
"Patience is bitter, but its fruit is sweet." -- Jean-Jacques Rousseau
"All we need is just a little patience." -- Guns 'N' Roses

Posted by Brian Tashima at 2:57 PM