Yo, Felicity again. I really didn't feel like doing fill-in blog-duty this week, but that dude kept whining and begging and stuff (ed: no I didn't) so finally I felt sorry for him and said fine, whatever. Seriously, I don't know what the heck he's spending so much time working on. It's like he's trying to write a novel, or something.

Anyhoo, I'm just gonna ramble aimlessly until I fill enough space to call it a day. So, last week I was talking to Joel about his favorite female sci-fi/fantasy characters - again, not my idea - and when he mentioned Katara from Avatar: The Last Airbender, it brought back some memories about that show, which I actually kinda liked when it was on. 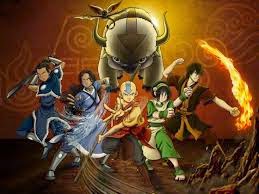 For those of you who aren't familiar with it, it was a TV show that was on Nickelodeon from 2005 to 2008, and it was about a kid named Aang who could manipulate - or "bend," as they called it - all four elements (air, water, earth, fire) while other folks could only do one, if that. It was set in kind of an alternate world that was like Earth, but not really, because, you know, of all the bending and stuff, and it had this totally Asian anime-type flavor to it.

There were three seasons, so it was like a trilogy, and the storyline was sort of your basic reluctant-chosen-one-saves-the-world-from-the-evil-warlord kind of deal. But the writing was really good, and there was a nice balance of action and humor and all that stuff that makes things fun to watch. Since I have a black belt in karate, I also appreciated all of the realistic martial arts moves, which I've heard they put a lot of effort into to make them look authentic and stuff.

I also liked how the girls in the show were portrayed. Like Joel said last week, Aang's co-star Katara was a strong character who wasn't just tagging along and healing Aang whenever he got hurt. Well, I mean, she did that too, but she really kicked some serious butt with her own waterbending skills and saved the day on her own more than once (in fact, at times I felt like Aang was a little too dependent on her). And other female characters like Toph (I looove Toph), Suki, and even crazy Azula were independent, powerful ladies who could more than hold their own against anyone.

So, yeah, in case you haven't guessed by now, I would say that if you haven't watched this show yet, you should totally check it out. But don't watch the movie adaptation of it - seriously, just don't. It's bad. Not like the so-bad-it's-good kind of thing - it's just bad.

Well, I think that's enough for this week. Maybe next time I'll do one of those liveblog dealies where I'll watch an episode of this show and talk about it while it goes on. Or maybe not. Laters
Posted by Brian Tashima at 6:55 AM