Video game update: Alert! Alert! We have a distraction! While Nintendo takes their sweet old time adapting Xenoblade X for the Western Hemisphere (RELEASE DATE ANNOUNCED ZOMGG!!!11!!), we finally found something to hold our attention temporarily, at least. 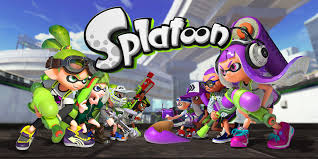 Splatoon is a simple, third-person shooter game that is like a twisted mix of paintball and Dynasty Warriors. I'll leave the official reviews to others, but suffice it to say that my daughter and I find this game to be a satisfactory time-waster in between our repeated binge re-watchings of Avatar: The Last Airbender and The Legend of Korra. Our shared character is up to level 9, so we're still a relative newbie, but we hope to see you in one of the various arenas soon (we'll be the one with the paint roller).

Book Two Update: Over 2/3rds of the way done with re-writes. I'm very, very excited. If all goes according to plan (yes, I know I should stop saying things like that, but at this point I'm pretty much over the whole jinx thing), I should have a completed, revised draft sent in to my editor by early August. The journey continues, but the end is still in sight, and it will be very much worth it, believe me.

Band Update: We just played a really fun show at Shahanan's this past Saturday with Medium Size Kids and our usual gig-mates Stab In The Dark. Check out a live video sample here! As always, we had a great time. Much mahalos to Nate and everyone who came out to hang with us. 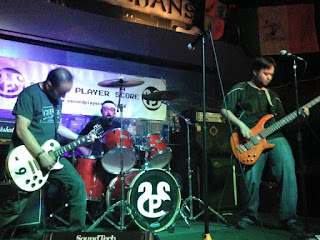 As you may already know, we're scheduled to hit the studio next month to record a couple of songs for our upcoming second album, so we'll be entering high-intensity Boot Camp Mode big time over the next few weeks. By the way, our drummer Kyle just landed an awesome DJ gig with Neue Regel Radio, so be sure to check him out when his show kicks off on July 9th!

Cat Update: Growing up fast and getting into all kinds of kitty mischief. Here's Boots having what looks like a really awesome cat-dream: 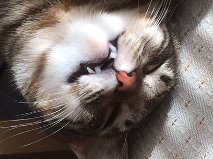 Wonder what he's dreaming about? Whatever it is, it must be good.

Posted by Brian Tashima at 7:04 AM