Normally, unless I'm doing a live rewatch with Felicity, I don't talk about individual episodes of a TV show in this blog. There are lots of other places on the Internet for stuff like that. In this case, however, I need to make an exception. Note: contains spoilers for "Twice Upon a Time." Although, if you're into Doctor Who, you already know everything by now. 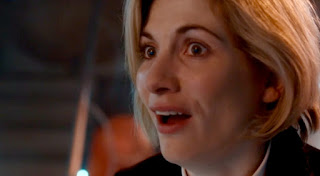 If you've been following this blog for a while, then you're aware that I'm a Doctor Who fan. As far as a particular Doctor goes, though, I don't really have a favorite (Whovians, as fans of the show are called, are generally fond of picking favorites). All the Doctors are pretty awesome to me, but I suppose if you go by the amount of merchandise one owns, then Peter Capaldi's Twelfth Doctor would have the edge, since I have his coat, sonic screwdriver, sonic shades, and I dressed up like him on more than one occasion (it doesn't hurt that he plays the guitar).

So it was a little bittersweet to see his last episode on Monday. It really does feel like he just took over the role a few days ago, which I suppose might be the closest we non-companions can get to time travel. I enjoyed the fact that his Doctor had a really defined character arc; he started out all dark and grouchy and a wee bit misanthropic, but by the end of his run he had evolved into a warm, caring, and - okay, I'll say it - kind person who didn't mind hugs at all.

I'll miss him. But! Notice that I said "bittersweet." The "sweet" part comes from the fact that we now have an interesting new incarnation to look forward to when the show resumes later next year. I had been attempting to predict a number of different milestones when it came to the Thirteenth Doctor, such as who would play the role, what her introduction would be like, and what her first line would be. I sort of got the first one (Jodie Whittaker was among four candidates that I guessed), but I totally whiffed on the second and third. I was a little disappointed that my second prediction was wrong (I still think my idea would've been pretty epic), but I'm glad I missed the third.

While "Well, it's about time" might've been in character for Twelve (he seemed to have been fond of puns), it was, I admit, probably a bit too on-the-nose. Also, in any case, it wouldn't have made sense given the context of the story, which was that - in my opinion, anyway - Twelve was consciously trying to regenerate into a woman. According to the show's lore, the Doctor has never been very good at regenerating (others of his kind have shown the ability to exert more control over what their new forms will be), but I think that this time, he really wanted to "afford the upgrade," as his arch-frenemy the Master/Missy once said. Then, when she saw that it actually worked, her reaction was one of a person who got exactly what they wanted for Christmas.

My only question now is, how is she going to survive what looks to be an extremely long fall? My guess - here we go with the predictions again - is that, having just freshly regenerated, she'll still have enough of that energy left to heal whatever injuries she'll sustain when she hits the ground. There are precedents for something like that to happen, like in "Let's Kill Hitler" when River Song was shot by German soldiers but was unharmed ("Word of advice, boys - never shoot a girl while she's regenerating!")

Anyway, what do you think? I guess we won't be able to find out until next year...unless one of you has access to actual time travel? If you do, please contact me immediately, because I can't wait for the next season of the show to start.
Posted by Brian Tashima at 8:24 AM