One of my favorite things about anime shows is the theme song. Or theme songs, I should say, as there's usually an opening theme as well as an ending one. As I believe I've mentioned before, Netflix will automatically assume that I want to skip the songs, which oftentimes will make me yell "No, play the song!" at the TV, which startles my cats. I don't know why most anime theme songs are so good. Actually, I do have a theory, but it's top secret for now because I'm integrating said theory into the plot for Joel Suzuki, Volume Five (seriously, I am).

I bring this up again because it seems like a lot of the recent crop of anime shows I've been watching don't have an opening theme song. Or either that, some of the episodes do have one while others don't. Or it takes a long time to actually get to the song. What is happening here, showrunners? Don't you know that not only does an epic opening theme song make your series that much better, but that it also offers an opportunity for bands - some of whom might be signed to the same company that is producing your show - to get their music out to a larger audience? I mean, epic anime theme songs are how I discovered a lot of my current favorite J-Rock artists, especially since a few long-running shows change up their themes each season or mid-season.

Anyway, let's get on with the Roundup, shall we? (Beware, for there may be spoilers.) 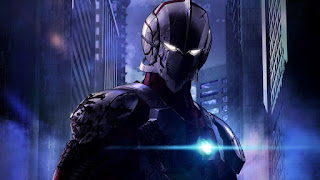 Having grown up in Hawaii, I was always more a fan of Ultra Seven than of his predecessor, Ultraman. Nevertheless, I was still very interested in checking this show out. And I'm ultra-glad I did (insert well-deserved groans here). So far, through the first season the show has established itself as a darker, grimmer take on the original that explores some of the real-world ramifications of being Ultraman; not only the collateral damage aspect, but also the moral dilemma involved with killing aliens, even if they're bad guys. It balances that darker tone well with some humor and lighter moments (I loved the Rena's hat-and-glasses disguise joke), something that I really appreciate.

The CG art and animation is very video-gamey, which is not a criticism. I suspected, based on the movements of the characters, that they were using motion capture, and sure enough, when the ending credits rolled, I was able to use my rudimentary knowledge of katakana to see that there were "motion capture actors" and "motion capture animators." The show is rated TV-14, but it pushes right up to the border of that rating and sometimes, in my opinion, crosses over into TV-MA territory with its somewhat gratuitous use of blood, violence, and profanity (not a problem with me, but just in case you're thinking this might be a good show for young kids). 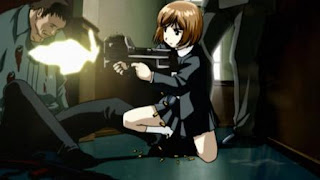 This show was definitely not what I expected. Based on the description, I thought it was going to be some sort of Sailor Moon-meets-Hit Girl kind of deal, where an ensemble of young women with extraordinary fighting skills routinely take on and wipe out cadres of bad guys before going home and having tea and cake. And, granted, while there is a fair bit of that happening in this show, it goes a lot deeper than that, exploring - like the new Ultraman does - a lot of complex moral issues. The slow, quiet moments actually outnumber the violent ones, and (spoiler alert) there isn't really a story arc to speak of, which makes the proceedings feel very realistic - or as realistic as a show about preteen cyborg assassins can get.

Note: this show has no opening theme song. 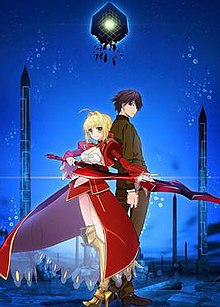 In the last Anime Roundup post, I said I'd probably check out more Fate titles after having watched Fate/Zero and Fate/Stay Night (Unlimited Blade Works). And, well, I'm a man of my word. This show was interesting to me because it basically took a bunch of the more familiar characters from the other series and gave them entirely new personalities. There was really no continuity with the other shows aside from a few similar worldbuilding elements, and the storyline somehow managed to be very simple but also extremely complicated at the same time. But guess what? None of that means that I didn't enjoy the show - in fact, I liked it a lot. I also loved Saber's catch phrase (or catch word, I suppose): "Umu!"

Note: the first episode had no opening theme, which prompted me to say "Really? Another show like that?" Yes, I talk to my television a lot. But then, starting with the second episode, the show introduced a pretty rockin' opening song, so, whew. 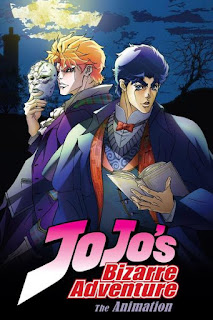 Bizarre adventure, indeed! This show, while embodying all the stereotypical over-the-top attributes normally associated with anime, was so, so watchable. I guess that explains why there's an entire franchise built around it that I haven't even started to scratch the surface of yet. I love how some of the characters are named after classic Western rock bands (REO Speedwagon, AC/DC, The Cars, Dio, etc.), and the ending - which wasn't actually an ending, as there are lot more episodes that aren't available to me at the moment - was pitch-perfect.

Note: the first episode had no opening theme. 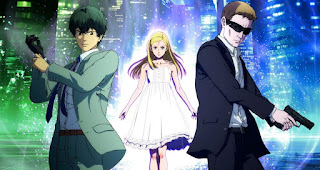 This was a fun show. Very Matrix-y. Each episode went by really quickly. I did not know that it was based on an actual existing augmented reality game until afterwards. The concept of "XM" (exotic matter) was very cool, as was the idea of "Sensitives" (people with XM-powered abilities). I kind of wished that Sarah had played a bigger role instead of being a standard damsel-in-distress for most of the season, but oh well. Everything kind of wrapped up neatly at the end (despite the cliffhanger) so I'm not sure where, exactly, they would go with this for a second season assuming there is one, but if there is, I'll be there.

Note: it took a while to get to the opening theme in the first episode, nearly prompting me to talk to my TV yet again, but it got there eventually. 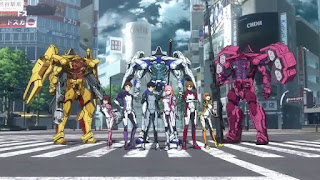 In keeping with this recent trend of "darker and grittier" (see Ultraman, above), it seemed to me that this show sort of wants to be to the isekai (portal fantasy) and mecha (giant robot) genres what Madoka Magica is to the "magical girl" genre, with unexpected twists, realistic characters (or as realistic as these things can get), and sometimes shocking moments. Despite plot developments that left me confused at certain points (I thought Milo was going to return to 2010 much earlier than she did) and a supposed main protagonist who was thoroughly annoying and unlikable for most of the season (there were a couple of fun meta moments when the writers themselves seemed to be aware of this), I found this show to be incredibly watchable; when the end credits for each episode started to roll, I always thought "wow, that went by fast." I also liked how the season wrapped things up nicely but still left plenty of room for more. Bring it on, I say!

Note: this show had a cool opening theme song from the get-go.

In This Corner of the World 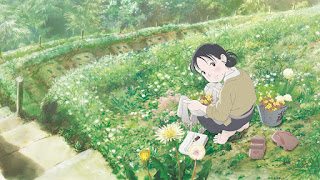 To fulfill my one-feature-length-anime-per-Roundup requirement, I chose this one, which isn't a classic (yet) along the lines of Akira or Battle Angel Alita but is nevertheless highly acclaimed, having won a boatload of awards since its release in 2016. A fictionalized account of a woman's life as she grows up in Japan pre- and during-WWII, it's slow and gentle in tone while still being unflinching in its depiction of the horrors of war. The fact that you, the viewer, knows what's coming - namely, the atomic bombing of Hiroshima - lends an undercurrent of somber uneasiness to the whole proceedings, which are otherwise basically slice-of-life vignettes that follow the main character as she grows up, gets married, and tries to live a simple and honest life. At two hours and nine minutes, it's on the long side, but very well worth it. Strongly recommended.

In the next roundup, probably: Hunter x Hunter, March Comes in Like a Lion, Fairy Tail, A Silent Voice, and more!
Posted by Brian Tashima at 6:32 AM