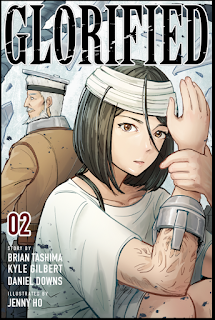 For those of you who are new here, Glorified is the comic book series written by me and my fellow members of Second Player Score and wonderfully illustrated by the awesome Jenny Ho (aka Jenny Ling). It tells the story of an elite soldier in a post-apocalyptic future who goes on a rogue search for both her home and her humanity. If you like John Wick or The Mandalorian but with a butt-kicking female lead a la Kill Bill or Mad Max: Fury Road (because, let's face it, Furiosa was the main character of that film, not Max), then you'll probably like Glorified.

In Issue #2, Gloria - after escaping from Fort Storm in a stolen ship - crash-lands near a settlement called Ragged Town, where she's rescued by a benevolent machinist named Gage. The problem is that in Gloria's former role as an Enforcer for Fort Storm, she conducted raids on Ragged Town that involved her killing a bunch of people, so naturally, if the townsfolk found out she was in their midst, you can bet that there would be trouble.

For them, that is.

Because, you know, if they tried to get their revenge on her, she would go all Beatrix Kiddo on them. Gage, being the pacifist that he is, wants to avoid all of that, so he tries to sneak Gloria out of town quietly. Of course, that doesn't quite go as planned.

Anyway, the issue is available in both print-on-demand and digital formats, and you can get it at this link here. You can also catch up with the story by getting Issue #1 here. As for Issue #3, it's currently in development and is slated for release later this year!

(P.S. Glorified the comic book series is a tie-in to Glorified the music album, which you can find here. Each issue corresponds to a track on the album.)
Posted by Brian Tashima at 6:27 AM