All Kinds Of Updates

Lots going on, so let's get to it!

Album Two Update: IT IS DONE. I have CDs in my hands as we speak. The official release date is November 1st, but you can get the lead single "Head Of Sin" on iTunes as part of a pre-order starting October 4th. You can also hear some advance tracks at our website and on Neue Regel Radio every Tuesday at 10am Pacific until the album's release. Stay tuned for an announcement about the CD release parties!

Book Three Update: The revisions that I was talking to Joel about last month are done. Now I'm just doing some pre-final proofing, and then it's off to my editor for a line edit. Getting excited...

TV Update: My daughter turned me on to a great new (or relatively new, anyway) series called Miraculous: Tales of Ladybug & Cat Noir, or Miraculous Ladybug for short. Yeah, it's a cute kids' show, but that's what we do around here! It may be geared toward a younger audience, but the writing is smart and sharp, the characters are completely charming, and they do the whole "villain-of-the-week" thing that was a staple of my favorite tokusatsu shows like Kikaida and Kamen Rider. 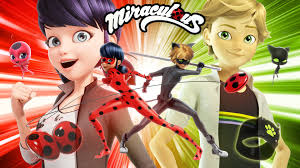 The two leads, Ladybug and Cat Noir, are high school students by day and secret identity superheroes by...well, still mostly day, and they have huge crushes on each other. Only, she likes him when they're regular kids, he likes her when they're in costume, and neither knows about each other's identities (even though it's so totally obvious). Doesn't that sound like fun already? And the theme song is great as well. I binge-watched the entire 26-episode first season with my daughter, and immediately thereafter I filed the whole thing in my "I wish I had created this" bucket. I can't wait for the Halloween special, the Christmas special, and season two next year.

Video Game Update: Anxiously awaiting Breath of the Wild. In the meantime, I took my kids to the Legend of Zelda Symphony concert a couple of weeks ago, which was ZOMGAMAZING
Posted by Brian Tashima at 6:49 AM