How Would Joel And Felicity Fare In A Duel With Other Heroes?

The other day I found myself wondering who would win a fight between The Avengers and The Justice League. As it turns out, a few other people have wondered the same thing, so I think that that particular stretch of ground has already been covered quite adequately. 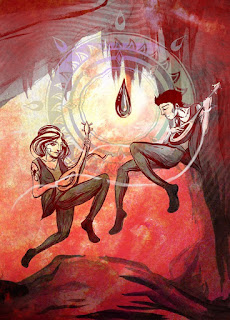 So then my thoughts turned to my own characters, Joel Suzuki and Felicity Smith. How would they do in a fight against The Avengers? Or, say, Harry Potter? Or Avatar Korra?

N: Hello.
B: You know your name sounds like something straight out of Star Wars, right?
N: Yes, I've heard that before.
B: All right, let's get started. So the question here today is: how would Joel and Felicity fare in a fight with other sci-fi/fantasy heroes?
N: Well, first of all, I think you have to settle on a specific skill level for everyone involved. Obviously, Joel and Felicity's wavecasting proficiency varies depending on which part of which book you're talking about.
B: Good point. Why don't we just go with a "standard/average" level - like, post-training period, but no extra power-ups or temporary weaknesses.
N: I suppose we can do that. All right, begin.
B: Let's start with Joel vs. Harry Potter.
N: That's a tough one. Wands and wavebows have similar capabilities, and it takes roughly about the same amount of time to play a wavebow riff as it does to say the name of a spell. The movie version of Harry might have a little advantage there, because he was able to perform nonverbal spells, and Expelliarmus could knock the wavebow out of Joel's hands pretty easily. Joel has the Sight, but I'm not sure it would give him any extra advantages. So I'm going to say: Harry Potter.
B: Fair enough. How about Felicity vs. Luke Skywalker?
N: Oo, that's an interesting one. It'd be tough to defend against the Force, but "standard/average" Luke never really had the whole Force-pushing thing down, at least not to the extent that more experienced Jedi Knights did. Without that, he'd be at a distinct disadvantage, because wavebows are ranged weapons whereas lightsabers are not - unless you throw them, which "standard/average" Luke never really did. And in a case where both of them were disarmed for whatever reason, Felicity is much better with hand-to-hand combat. I'd have to go with Felicity here.
B: She'd be happy to hear that. Okay, let's say...Joel vs. Avatar Aang.
N: What would qualify as a "standard/average" Aang?
B: Let's go with all four elements, but no Avatar State. And we're talking about the young Aang, so his Earthbending is not the greatest.
N: All right. Well, this is another tough one. Joel would be able to deflect most bending attacks with a shield cast, but Aang should be able to dodge most directional wavecasts. The Earthbending move where you trap someone in the ground would be effective, but Joel might be able to avoid that one given the skill level that we're saying Aang is at. I think this one would be a pretty long and entertaining battle, and whoever gets in the first strike would win.
B: Let's give it to Joel, then.
N: If you say so.
B: I do. All right, one more and we'll call it day for now. How about Felicity vs. Captain Marvel?
N: Um, Captain Marvel. Duh.
B: Really? No contest?
N: No contest. I mean, c'mon, Captain Marvel can probably take out everyone else you've mentioned so far all at once by herself. I don't think Felicity would disagree.
B: You're probably right. Okay, well, thanks for stopping by, Nairb.
N: No problem. This was fun, we should do it again sometime.
B: Sure.
(Nairb leaves)
Felicity (walking in): Hey, who was that dude?
B: Oh - um, just a friend.
F: What were you guys talking about?
B: Nothing really important.
F: Oookay, whatever. Got any diet sodas left?
B: I need to do a store run. Before I do that, though, tell me - who do you think would win in a fight between you and Captain Marvel?
F: Pfft - me, of course.
B: Really? Why do you say that?
F: Because she's a comic book character, and I'm a real person. All I would have to do is close the comic or turn off the TV or whatever.
B: Interesting point.
F: Yeah, I know. Now, c'mon, off to the store with you. I'm getting thirsty over here.