This is an Album Three status update. But it's also so much more.

The process for Second Player Score's third album started quite some time ago, but it was first documented in this blog post from December 2016. From there, I've written numerous other posts that tracked the progress of the album as it slowly worked its way toward completion.

If you've been following along, then you already know that there's also a companion manga-style comic book, shown here: 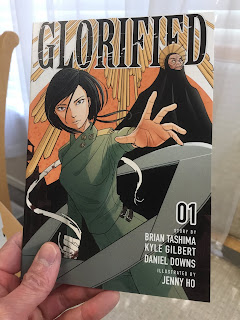 as well as a forthcoming minute-long trailer showing what Glorified could look like as an animated show. You also know that this project shares the same continuity and universe as all my other projects, including Joel Suzuki.

What you may not know is how this all got started. Well, here's the origin story.

On our first album, Fortress Storm Attack, there's a song called "Gloria." This song is important to Second Player Score lore in that it was the first song to which we applied our now-trademark three-part vocal harmony technique. It's also mentioned in Mystery of the Moonfire, Volume Two of the Joel Suzuki series (in one scene, Felicity plays a bit of it on her wavebow).

In the past we've often been asked "just who is Gloria, anyway?" and the answers have ranged from "a girl that I used to know in college" to "just a random word that seemed to fit the vocal chorus melody." But, as it turned out, the real answer was that Gloria - last name, Sin - was a woman living in a dystopian future who had been trained to be the best soldier of her generation.

The idea for this sprung from the song's opening line, "Did you remember to die today?" We examined what that line could possibly mean, and from there, Gloria's story arose. We then set about to build an entire album on that foundation, writing lyrics that would sketch out the arc of Gloria's journey.

Then, at a certain point, we thought (because we're a bunch of overly-ambitious nerds) "hey, wouldn't it be cool if we made a comic book out of this?" So we wrote a script for the first issue based on the lyrics for the first song on the album and had the first four pages illustrated. Those pages turned out well, but at that point we realized (because we're a bunch of picky, masochistic nerds) that what we actually wanted was to have them done in the style of traditional Japanese manga. So we commissioned a different artist who not only redid the first four pages, but also completed the entire first issue as well as the album artwork, shown below: 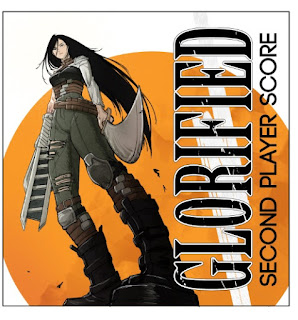 And so now, the next step will be - you guessed it - the album release party! Here are all the details for that:

Special musical guests will include Matt Danger, The Doom Generation, and The Fauxriginals, and there will be a free drawing for a Second Player Score-themed guitar signed and customized by us. We'll also be bringing along our usual video game merch booth setup while premiering a video narrative that will play in the background while we perform every track, in order, off the new album. On top of that, part of the proceeds from sales of the album and comic will be donated to the Oregon chapter of the American Foundation for Suicide Prevention.

The release party isn't the end, though. We're still writing the scripts for the rest of the issues that comprise Volume/Season One (2-4 are done, working on 5-12 now) and hope to eventually get those produced as comics as well as - fingers crossed - the aforementioned animated series.

Oh, and where did the title "Glorified" come from, you ask? Well, there's a scene in one of the later issues where, after Gloria goes all Beatrix Kiddo on some bad guys, one of the other characters, enthusiastically appreciating Gloria's handiwork, tells the fallen baddies "You've just been Glorified, b***h!"* So, yeah, there you go.

* Not really a swear word - heck, it was used in Harry Potter and the Deathly Hallows - but I do try to keep this blog as family-friendly as possible
Posted by Brian Tashima at 6:39 AM