Here we are with another edition of Anime Roundup! This time around, we have some fun shows that are about people who create art, people who ARE art (literally), and people who symbolize life and society in general. As always, mild spoilers are to be found. Ikimashou!

Saekano: How to Raise a Boring Girlfriend 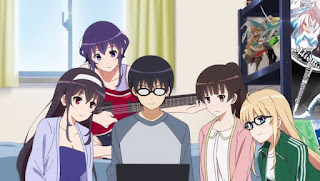 At first, you might think that this is one of those animes about several teenage girls who all inexplicably like the same boring dude (yes, that's a subgenre), but...well, it is sort of like that, but the fun part is that it KNOWS it. The basic gist of the story is that there's an otaku (nerdy) guy who wants to create his own dating sim game, so he recruits some friends/classmates/relatives - that are all way more talented than him - to join his doujinshi (essentially, indie creator) team, and then, of course, all sorts of hilarious and dramatic escapades ensue. I especially enjoyed the meta moments where the characters spoke to each other as if they knew they were in a show ("You can't start vying for screen time now, it's the third act! Especially after you were essentially missing for the entire second half!") 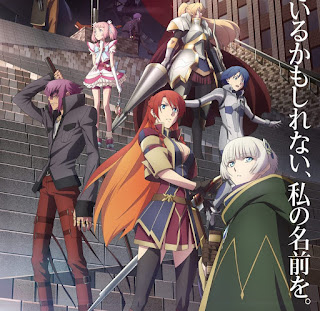 Speaking of meta, this is an anime about anime/manga/video game characters ("Creations") from different genres - mecha, fantasy, magical girl, dating sim, etc. - who come to life in the "real" world and then join forces against one main villain (herself a Creation) and a few of her flunkies in order to save all worlds, fictional or not, from total destruction. Kind of like if the members of the Avengers or Justice League were pulled not only from Marvel/DC comic books, but also from Star Wars movies, Harry Potter novels, My Little Pony, etc. (can you imagine a super-team consisting of Spider-Man, Luke Skywalker, Hermione Granger, and Twilight Sparkle?) It's a great concept and very well-executed with a nice blend of humor, drama, and action - in fact, this show just might have cracked my personal Top 10 list. I often found myself wondering if the "real world" characters knew that they, themselves, were also in a fictional realm of existence (which we may ourselves be??). I also pondered what some of my own creations would think and feel if they found themselves in a similar situation - Gloria, for example, would absolutely hate my guts for having made her world a desolate, post-apocalyptic nightmare. 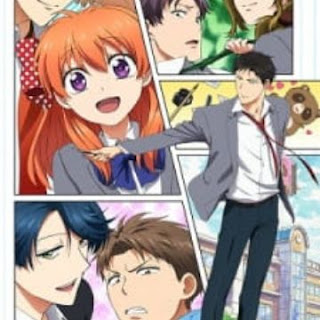 A light-hearted rom-com about a girl who has a crush on a hunky dude who is secretly a romance manga writer-artist but who is completely oblivious to romance in real life and then she tries to get closer to him by becoming one of his assistants since she's also a really good artist but any attempt on her part to initiate anything with him ends up with him interpreting her actions as simply a good example for a storyline that he can incorporate into his work, this one was a lot of fun and I wish there were more than twelve episodes.

Seven Senses of the Reunion 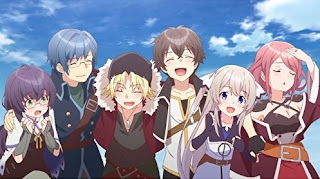 I'm sure I'm not the only one who has pointed this out, but this show is totally a straight-up mashup of Sword Art Online and Anohana. Which - to me, anyway - is not a bad thing, mind you. There's even a little bit of Uploaded with the concept of dying in the "real" world but living on in a "virtual" one. Good times. 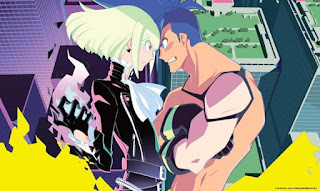 My daughter tipped me off to this one. Her track record of pop culture recommendations in general is pretty impeccable (Doki Doki Literature Club, Animal Crossing, Ouran High School Host Club, Legend of Zelda, etc.), so I figured I should check it out. Conclusion? You have excellent taste, my dear. A full-length feature film, Promare starts off being about a brash firefighter who clashes with a fire-generating mutant (kind of like Pyro from X-Men), but then it develops and goes off into a bunch of different storyline directions, some predictable, some not. It has a unique animation style that I've never seen before and a great sense of humor (I especially loved the part where Galo slept through Deus Prometh's expository dialogue), and it's very fast-paced with astounding action sequences. It also reflects some serious themes about prejudice and diversity that are always relevant, but especially now.

Anyway, on to the next batch!
Posted by Brian Tashima at 6:32 AM