I'd like to take a moment to say thanks to my good friends Karen and John Krejcha of Autism Empowerment. When I made the decision earlier this year to independently publish Secret of the Songshell, they were the first people that I informed. It was extremely important to me that my characters represented accurate portrayals of people on the autism spectrum, and although I had my son as an example to work from, I asked Karen and John to review a draft of the book and provide any feedback they had regarding the characters and the story in general. It wasn't until I had their blessing that I had the confidence to proceed.

Both of Karen and John's sons are on the spectrum, as is Karen herself. I was fortunate enough to meet them long before Secret of the Songshell was even a thought, as our kids went to school together. Through Autism Empowerment, their educational and charitable non-profit organization, they are doing wonderful things to raise awareness about the autism spectrum and to service the local, national and international autism community. I am very happy and grateful for the opportunity to help support them, and for their continued support of my little fantasy book series.

Thank you, Karen and John.

I'm thankful for the opportunity to share my writing and music with the world.

Every day is Thanksgiving. Never take anything for granted.

Have a wonderful day everyone.

Gotta run - the food is calling.
Posted by Brian Tashima at 11:47 AM No comments:

I am honored to announce that Secret of the Songshell has been selected as a Finalist in the 2012 USA Best Book Awards for fantasy fiction.

The competition was open to traditional as well as independent publishers, and the winners and finalists were well-represented by both groups.

So, if you're an indie author with a recent release, enter the 2013 contest now!

Also, if you're a resident of the Vancouver, WA area, you may have seen an article in today's Columbian newspaper about their book recommendations for holiday reading and gift-giving. If you haven't, here's the link! And yes, Secret of the Songshell was included.

The paperback version of the book has been re-issued with a new cover that features the Grub Street Reads endorsement seal on the front, and cool reviewer quotes on the back (so for all of you who bought the original version, you now have a collector's item). Check it out on Amazon, buy copies as holiday presents, and keep checking this space (or the book's Facebook page) for upcoming signing events. Don't forget, a portion of proceeds from book sales are donated to Autism Empowerment, a local non-profit organization that works to promote autism awareness and education. So not only are you getting a fun, nationally recognized sci-fi/fantasy story to fill that Harry Potter void, you're giving to a great cause as well.

Okay, commercial is over! We will return to regularly scheduled programming, um, soon.
Posted by Brian Tashima at 1:39 PM No comments:

I think it's time for another installment of everyone's favorite comic-strip band, Spooky Hero. This one is from 2006, hence the Franz Ferdinand and American Idiot references (I'm too lazy to change them). Again, the Joel in this strip is not the Joel from The Spectraland Saga. They are two different imaginary people. Seriously.
﻿ 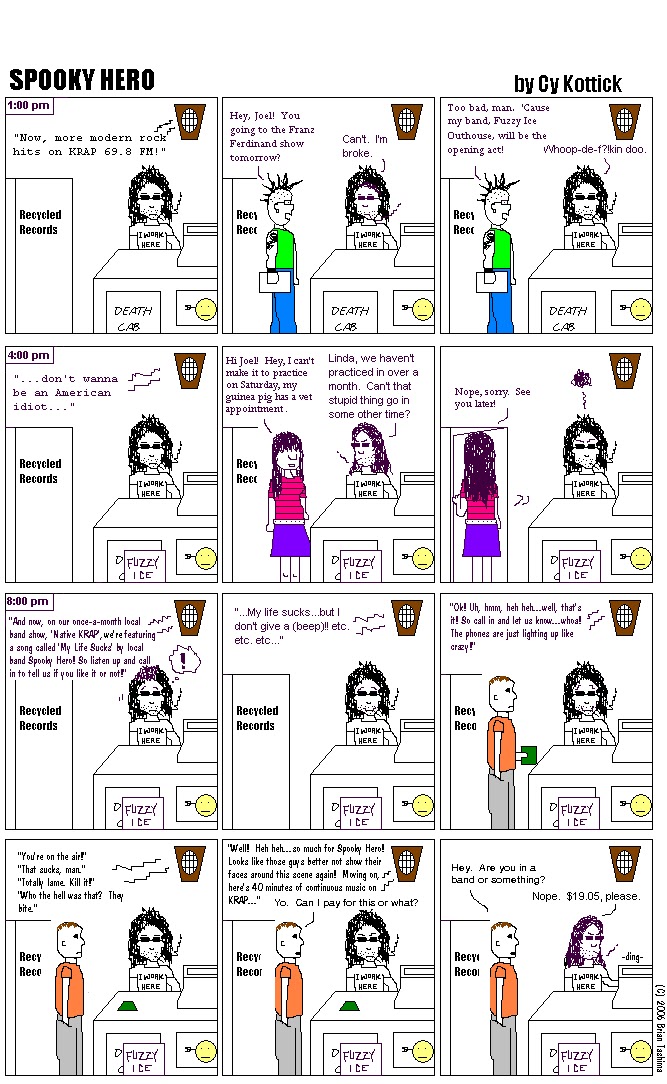 - Can your melody stand on its own? Test it by singing it in the shower or playing it on a piano, without accompaniment. If you find yourself repeating the same note over and over again, you may want to think about changing it up a bit (although, admittedly, sometimes the monotone thing works really well).

- For a four-line verse or chorus, employ the classic "Happy Birthday" structure: line 1 - introduction; line 2 - continuation; line 3 - escalation; line 4 - resolution. Sing the Happy Birthday song to yourself and you'll understand what I mean. Or, listen to this example. Or this one.

So what are you waiting for? Get writing!
Posted by Brian Tashima at 11:20 AM No comments:

Orycon 34, or How I Spent My Weekend

So this was my first time attending Orycon, Oregon's premier science fiction convention. I had wanted to check it out in the past, but never got around to it. This year, I actually got to go as a member of NIWA, the Northwest Independent Writers Association.

We took turns being the Featured Author O' The Hour, and I was the first one up on the first day (Friday). Neat! I experimented with two different sitting positions behind the table before we all agreed that standing out in front was the much superior alternative.

I also attended a panel called The Future of Small Press Publishing, the basic take-home message of which was: the future is bright! Seriously, though, with all of the options and resources available these days, it's a great time to be an author. Which segues back into...

NIWA! If you're an indie author in the northwest, check us out. Not only do we do cool stuff like have a communal table at Orycon, it's a great way to network with other writers and share resources and ideas. Everyone is friendly and supportive, and it's just a lot of fun.

And did I mention the party? Yes, there was an after-party in the convention hotel on Saturday night. You can find pics of it on the NIWA Facebook page, but if you're looking for a summary from me, let's just say, what happens at Orycon...
Posted by Brian Tashima at 4:57 PM No comments:

Did you know that today is National Author's Day? Well, it is. Seriously. 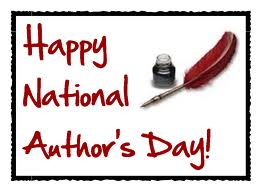 In celebration, the cool folks at Grub Street Reads have rounded up their endorsed authors and put us all together in this blog post, where we answer that age-old question, "Why Do You Write?" So stop whatever you're doing and check it out! Although what you're doing right now is reading my blog, so I guess that goes without saying.
Posted by Brian Tashima at 9:11 AM No comments: