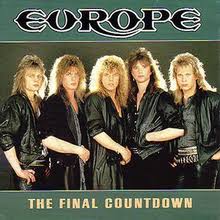 Hello, and welcome to the third installment of Anime Roundup! Last time, I said "let's see if I can wait another ten weeks before writing the next installment," and, well, here we are, exactly ten weeks later. Trust me, though, it was hard to resist - I've caught the anime bug big-time, and it took a fair amount of willpower not to just start babbling about this stuff right away. 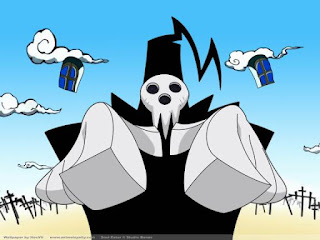 During those ten weeks, I've been binging a bunch of shows like nobody's business. One thing I've noticed is that a lot of them tend to deal with the themes of death and demons. What's up with that, anime writers? Like, for instance, the word "shinigami" - "death god" - has shown up in three series that I've watched so far (Death Note, Bleach, Soul Eater), and devils and/or demons have played a major role in three others (Devilman Crybaby, The Devil is a Part-Timer, Blue Exorcist). The neat thing, though, is that in all of those cases the shinigami or devil tends to be the good guy, or at least on the side of the protagonist/main character (sort of, anyway, in Ryuk's case). I think that's pretty cool, and it makes for an interesting premise. Maybe that's why the writers do it. Okay, I just answered my own question. (Editor's Note: guess what, Brian, there are waaay more shows with similar themes that you haven't watched yet)

Anyway, let's get to it. As you know if you've read the previous posts, these are not reviews, they're just my own personal thoughts and opinions about these various shows. And just because a particular show didn't catch fire for me doesn't mean that it's bad, or that you won't love it. Art is subjective, and we all like different things. That's why art is so awesome! 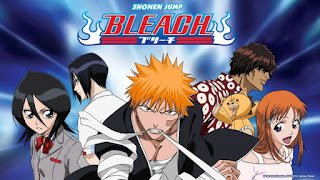 This is one of the aforementioned shows that features a shinigami, or, in this case, lots of shinigami. Some are good guys, some are bad guys, some are bad guys who become good guys. And wow, do I love this show. Now I see why it's considered one of the big names of modern anime. I zoomed through the first three seasons on Netflix before it ran out. I understand that the other 13(!) seasons are available on Hulu, so I might have to sign up for YET ANOTHER streaming service. Argh! Oh, also, I thought the live-action version was solid, and the fact that Hitohira No Hanabira by Stereopony was one of the show's many theme songs simply puts it over the top for me. Bohahaha!

The Devil Is a Part-Timer!

This show was so much fun. Just the premise alone - that the Devil has to get a job slinging burgers at "MgRonald," and he ends up enjoys it - makes me smile. To say any more would be getting into spoiler territory, so I'll just end with this: the season was way too short (only 13 episodes). Are we ever getting a second one?? 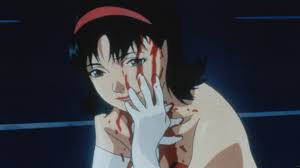 Not a series, but a movie. And a classic. Pure psychological horror. Kind of hard to track down (and I was only able to find it with English dubs, not subtitles, which - mild spoiler - ruins what I think is supposed to be a really creepy moment) but totally worth it.

It took a little while for me to warm up to this one, but once I did, I enjoyed it. The protagonist is a devil - the son of Satan, specifically - but he's totally a good guy (he actually goes to a school to learn how to become a demon-fighting exorcist), which was cool. I've heard there's a second season, so I'll have to track that down somehow.

Your lie in April 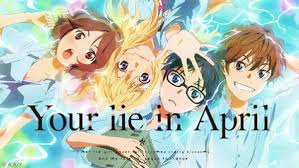 I started watching this one mainly because of a screenplay I was writing that involves, among other things, two of my main characters watching various anime shows. This show is name-checked in the script for plot-related reasons, so I figured "well, I guess I'd better watch it so I know what my characters are doing." And guess what, it was good! It's a cute, kid-friendly drama-comedy with heart, music, and kind of a, well...I won't say it, because spoilers. Watch it yourself and find out what I'm talking about! 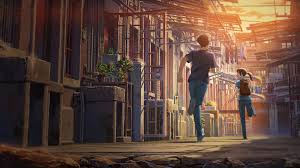 Another stand-alone movie. Netflix kept relentlessly pushing this one at me so I finally gave in and watched it. And hey, it was cool, so thanks, Netflix. It's very quiet and low-key compared to most other anime I've seen, which was a nice change of pace. 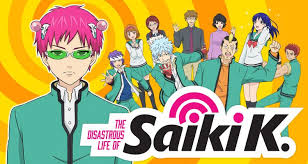 This one was fun and quirky (each episode consists of five "mini-episodes") and I think I would've kept going with it, but then other stuff just sort of overwhelmed it. Yes, I'm looking at you, Bleach.

Children of the Whales 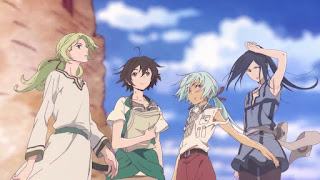 I watched the first few episodes and couldn't figure out why it was rated TV-MA. I believe I stopped right before I was about to find out. 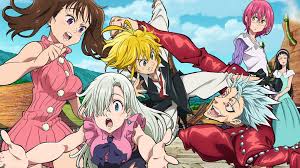 Another one that Netflix was pushing at me relentlessly. I gave it a shot.

Yeah, so obviously, I've been busy! Join us again in ten weeks or so (but keep reading the other posts in the meantime - or don't, whatever) when I will talk about another heavyweight title that rhymes with "Ga-ru-to."
Posted by Brian Tashima at 6:42 AM No comments:

Hey-o! If you're in the beautiful Vancouver/Portland area (or happen to have access to some form of inter-dimensional transportation device), please consider checking out the annual Words and Pictures Festival at Cascade Park Community Library this Saturday, October 13th.

It runs from 11am through 3pm, and I will be there along with a whole host of other cool authors, so there's sure to be something for everyone. The always-amazing Barnes & Noble-Vancouver, WA will be handling book sales, and a portion of all proceeds go to the library (not to mention the usual Joel Suzuki donations to Autism Empowerment on top of that) so anything you buy will be doing all sorts of awesome.

Hope to see you there! (AND IF YOU REALLY DO HAVE AN INTER-DIMENSIONAL TRANSPORTATION DEVICE PLEASE LET ME KNOW)
Posted by Brian Tashima at 6:34 AM No comments: 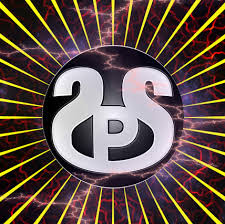 Anyway, you'll be hearing more about the SPSU in the weeks and months to come, as we have some pretty big plans in store as well as some other projects that are still being kept under wraps for now. So stay tuned!
Posted by Brian Tashima at 6:41 AM 2 comments: