That's right, it's another edition of Anime Roundup! This time, I'll be talking about some heavy hitters that, if you're even on the periphery of anime fandom, you've probably heard of before.
Attack on Titan 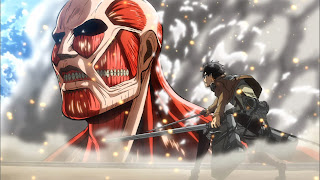 This one could also qualify for my previous Anime Roundup post in which I listed shows that I initially gave up on but then gave another chance to, because I actually tried watching it back when I first really started getting into anime but then stopped because of what I at the time called its "unrelenting bleakness." After I finished watching the Korean horror drama series Sweet Home, however (which you can hear me discuss with my bandmates from Second Player Score in Episode 69 of our podcast), I decided that there was no way this show could be bleaker than Sweet Home, so I restarted it, and behold! It was so much fun that, like a Titan eating humans, I consumed the whole 25-episode first season (which is all that's available on Netflix) in a matter of days. I now see why it's so popular, and I may have to sign up for Hulu just so I can watch the rest of it, dangit.
Demon Slayer 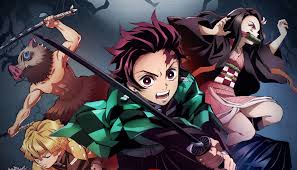 I had heard that a movie based on this series (a direct sequel to the first season) became the highest-grossing anime film of all time after it was released in Japan in late 2020, which is even more impressive when you consider that it happened IN THE MIDDLE OF A GLOBAL PANDEMIC when going to the theater is generally not a thing. So, naturally, I was excited when I saw that it - the series, not the movie - was coming to Netflix. And wow, let me tell you, it did not disappoint. About a boy who wants to become a demon slayer after his family is killed by a demon (except for his sister, who is turned into a demon), its particular blend of action, drama, humor, and gore is right in my sweet spot (although the supporting character Zenitsu is more than a little annoying at times). Also, the whole "nine Hashira" and "twelve Kizuki" thing makes my inner nerd squeal with delight. So now my only question is HOW CAN I SEE THE MOVIE??
One Piece 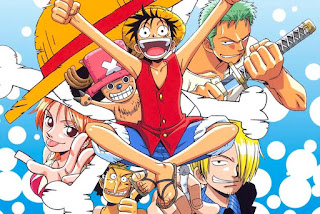 This show, about a boy with Mister Fantastic-like powers who wants to become the next King of the Pirates, is based on the best-selling manga of all time. Personally, I don't quite get it (I know, all you One Piece fans out there are like, whaaaa?), but I've only watched a relative fraction of the zillion gajillion available episodes so far, so perhaps it's a slow burn like many other shows I grew to love over time. I'm still plugging away at it, because if and when it ever does really take off for me, I will have an enormous catalog to enjoy.
Neon Genesis Evangelion 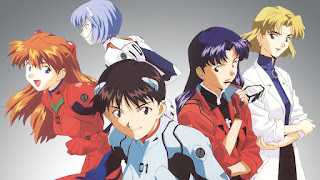 A classic from the mid-nineties, I'd heard that this show basically jumpstarted the entire anime industry at a time when interest was starting to wane. I thought, "but it's just a standard mecha show with giant kid-piloted robots fighting giant monsters, right?" Uh, wrong. After watching stuff like Kill la Kill, Gurren Lagaan, and Madoka Magica, you'd think I would have learned my lesson by now. Anyway, once I realized that this particular edition of Anime Roundup was starting to take on the "big name" theme, I decided to check this show out, since it (and a couple of related feature-length films) was readily available on Netflix. And...well, holy cow. HOLY COW. Not to give anything away, but from the early episodes where the show was just establishing its premise, you could already tell there was something different and groundbreaking about it. Even moments that were supposedly lighthearted still had a subversive undercurrent of dread and foreboding - a sense of "there's something not quite right here." It's also so thematic that you could probably write a college dissertation about it (and I'm pretty sure some folks have). On top of that, great pacing, terrific character development, lots of action, and some downright trippy sequences make this one required viewing for any anime fan.
Your Name

This is a full-length feature (not a series) that is the third-highest grossing anime film of all time, behind only the aforementioned Demon Slayer movie and Studio Ghibli's Spirited Away. And also, it is positively mind-blowing. Ostensibly a romantic dramedy on the surface, it blends a bunch of other tropes and genres in a way that you think wouldn't work at all, but it totally does, creating something that is far greater than the sum of its parts. I won't spoil anything even a little bit, but let me just say that watching this film was like a religious experience for me. It's only 107 minutes long but it feels like the journey of a lifetime (in a good way). My one complaint is that I could only find it in either English dub or Japanese with no subtitles, so I went with the dub version (curse my limited Japanese-language skills). By the time I was halfway through, though, I was so enthralled that it didn't matter. If you've been following this blog for a while and you feel like your taste in movies is anything similar to mine, do yourself an immense favor and watch this film as soon as you possibly can.
Posted by Brian Tashima at 6:10 AM No comments:

Hey there! Just wanted to let everyone know that the creative team behind the Glorified comic book series has launched a Kickstarter campaign to help raise funds for the next issue in the series. I know that this is a tough time financially for many folks out there, but for those who can afford it, we have some fun rewards available, including the chance to appear as a character in the issue! 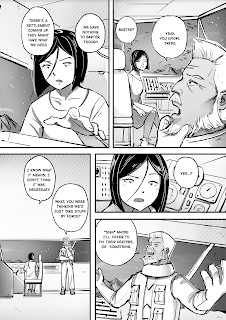 Issue #4 ("Liberty's End") shows Gloria and Gage stopping in a town called Liberty's End that is being terrorized by a local gang. In exchange for supplies, Gloria offers to train the townsfolk to defend themselves. But will they be ready in time? The answer might surprise you...
Anyway, the Kickstarter campaign can be found here, and Issues #1, #2, and #3 are available from the good folks at IndyPlanet. You can also find more information on the series itself here and here. Cheers!

/end commercial
Posted by Brian Tashima at 6:09 AM No comments:

Four-D: The Winter Suite Launch Party And Other Interviews

In case you missed my band's virtual launch party for our new four-song EP Four-D: The Winter Suite, you can catch it at this link. It's nearly four hours long, but it's a whole lot of fun (especially as we get drunker and drunker as it goes along).

Huge thanks to host Punky Bruiser for having us, and for being a good friend and big supporter in general. We've been on his show a couple of times before (once for a general interview and another time to discuss our thoughts on Marvel's Wandavision), and we're planning on being on again in the near future, this time to play some good ol' D&D. I recommend checking out his other non-Second Player Score episodes as well, as he covers a lot of fun stuff from the worlds of music and pop culture.
We were also lucky enough to be recent guests on a bunch of other cool shows: the Beers With Bands podcast, New Rock City, and No, This Is Mattrick! (hosted by Matt, the guitarist from No, This Is Patrick!) Check out those episodes at these links:
Beers With Bands
New Rock City
No, This Is Mattrick!
And, of course, you can hear our new EP (as well as the rest of our catalog) on Spotify or basically anywhere else music is to be found online. Cheers!
Posted by Brian Tashima at 6:17 AM No comments:

Today is the official release date of Four-D: The Winter Suite, the new EP from my band Second Player Score! 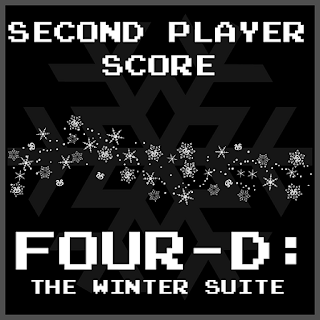 The EP, which is only available digitally, consists of four songs: "The Flow," "That Escalated Quickly," "Winner Takes It All," and "Dark Night of the Soul." It will eventually, when combined with the Summer Suite, Autumn Suite, and Spring Suite (all of which have been written but are yet to be recorded), be part of the full-length 16-song album titled, naturally, Four-D - of which there will be a physical CD and, hopefully, a companion card game and novella.
Four-D is, of course, a concept album, one that tells the story of a boy who chooses to compete in an interdimensional game for the prize of a single wish, only to find that the game is much more than he bargained for. Musically, we took on the challenge of making every song on the album just four chords, after we noticed that a lot of the best songs in pop music history are constructed in exactly that fashion.
We had also noticed that "four" seems to be sort of a magic number not only for music, but for the universe in general - four-chord songs, 4/4 time signature, four elements, four seasons, four compass points, four blood types, four mathematical operations, four DNA components, four forces of nature, and so on (in some East Asian cultures, the number four is actually considered bad luck, kind of like thirteen in the West, because the word for "four" - shi - is also the word for "death." But, well, death is just a natural part of life, right?)
So, since this was our fourth album, we decided to try to incorporate as much of that as we could into it. Along with having sixteen songs divided up into four EPs of four songs each, each EP would correspond to a season of the year, with the predominant key signatures for the songs representing that particular seasonal element - F# for fire/summer, A for air/autumn, E for earth/spring, and D for winter/water (D standing for water's chemical name, dihydrogen monoxide).
Basically, it's next-level nerdiness.
But while the songs together tell an overall story, individually they're grounded in common emotions that anyone can relate to. "The Flow" is a short and speedy rocker about when you're in the zone, whether it be creative or athletic. "That Escalated Quickly" reflects the feelings you have when things are getting out of control. "Winner Takes It All" is an inspirational ska-influenced number for when your back is against the wall and you have to pull out all the stops. And "Dark Night of the Soul" is for when you feel like all is lost, but some small light at the end of the tunnel keeps you going.
Anyway, you can now find all four songs on Spotify, Apple Music, and all other streaming outlets. We're also going to be having a virtual release party TONIGHT on the Punky's Mixtape show on Twitch from 5 to 5:30pm PST, so be sure to tune in to that!
Posted by Brian Tashima at 6:28 AM No comments: