Ten years ago, on this date (well, actually, April 30th, but close enough), I typed "The End" on the first draft of a manuscript called "Secret of the Songshell." Well, actually, I didn't really type "The End," but that was when I had finished it, at any rate. 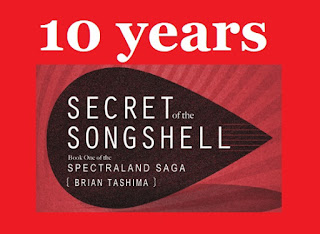 The ensuing decade has been quite a fun and wild ride. A little over a year after I didn't really type "The End," Secret of the Songshell, Book One of the Spectraland Saga was published on July 17, 2012. This was followed by an audiobook version the following year, a second book (Mystery of the Moonfire) in 2015, a name change from the Spectraland Saga to the Joel Suzuki series, and then three more books - Legend of the Loudstone in 2017, Fable of the Fatewave in 2018, and Ballad of the Bluerock in 2021.
Because of these books, I've had the chance to meet so many wonderful people, and I've had many great experiences, from speaking to schools and autism groups to being a panelist at conferences and everything in between. Thank you so much to everyone who has supported me and the series along the way - you're awesome, and, while the list is long, you know who you are.
As for the next ten years? Well, if all goes according to plan, we should see Volume Six in 2023, Volume Seven in 2025, and, quite possibly, Volumes Eight, Nine, and Ten in 2027, 2029, and 2031, respectively (Volume Eleven, the final one, will have to wait for a year during the following decade - meaning the ten years after 2021-2031. Hopefully 2033). Of course, you know what they say about plans, so we'll just have to see how it goes. But I promise that no matter what happens, I will continue to do my absolute best to keep telling Joel's story. Here's to more great years ahead!
Posted by Brian Tashima at 6:12 AM No comments:

Just as Saturdays have become Steak Night at my house (as detailed in this previous post), Thursdays - that's today! - have become Breakfast for Dinner Night. Specifically, bacon, scrambled eggs, and rice (hold the eggs for my daughter, who hates them). 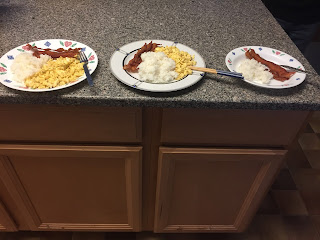 As with Steak Night, there's no need for a recipe, as obviously it's very basic. I fry the bacon first so then I can cook the eggs in the bacon oil. Also, I add a bit of milk to the scrambled eggs during the scrambling process. But both things are pretty common, though, right?
The bonus to this is that the house smells like bacon the next morning. I guess that same effect could be achieved by actually making breakfast for breakfast, and then the house would smell like bacon all day, but whatever.
Another bonus is that for me, scrambled eggs are just a delivery system for my actual favorite foods (besides bacon), which are hot sauce and minced garlic (conveniently dispensed via squeeze bottle). 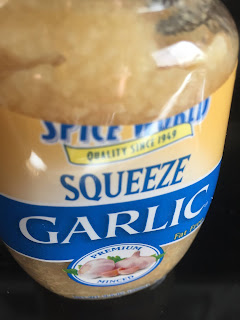 Also as with Steak Night, we don't do this every week, because too much bacon - oh, who am I kidding, we do this every week. For now, at least. Because, you know, bacon.
Posted by Brian Tashima at 6:17 AM No comments:

Here we are with another edition of Anime Roundup! No unifying theme this time, just an assorted grab bag of fun and awesomeness. Hajimemashou!
Code Geass 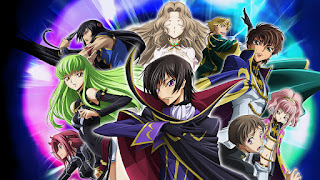 There's really no simple way to describe this one. It takes multiple genres and tropes (rebellion, mecha, magic, high school), mashes them together, and then weaves the resulting mixture into a complex, morality-questioning, socio-political narrative in such a way that totally shouldn't work...and yet it does. There's one line spoken by the main character in one episode that I think might sum it up best: "I'm trying to run a school festival and a coup d'etat at the same time!" Or I don't know, maybe not. You really have to watch it to understand the full scope, but I'll try again: in an alternate timeline where the Holy Britannian Empire has conquered Japan, an exiled Britannian prince acquires a power called "Geass" (which manifests in him as a sort of Jedi mind trick ability) and then uses it to try to overthrow Britannia as revenge against his Emperor father for letting his mother be killed *deep breath*. By the way, the prince's over-the-top mannerisms reminded me so much of Yuta/Dark Flame Master from Love, Chunibyo, and other Delusions (covered in this Anime Roundup post) that I had to go and rewatch that show. If you've seen both, you know what I'm talking about.
Kuroko's Basketball 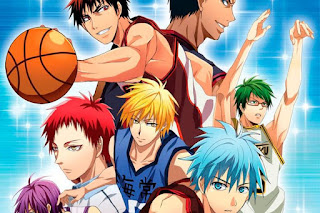 A sports drama-comedy that reminded me a little of Haikyuu!! (also covered in this Anime Roundup post), this one is kind of about a high school basketball player (the titular Kuroko) whose only strength is the fact that he's very easy to overlook and so he can pull off these amazing touch passes; otherwise, he can't shoot, dribble, or basically do anything else effectively. However, when paired with a stronger player, this particular skill makes him really valuable. And so, he teams up with one such player and their school goes on to challenge other schools that each contain a former member of Kuroko's middle school team that was nicknamed the "Generation of Miracles" and won three straight championships. I liked how each member of that so-called "Generation" had a certain hair color, a name that matched said color, and an individual strength of cartoonish proportions - they were kind of like "monsters of the week." As with Haikyuu!!, it didn't - spoiler alert - culminate in any kind of typical final championship game, but that's because Netflix only has the first season.
Love and Lies 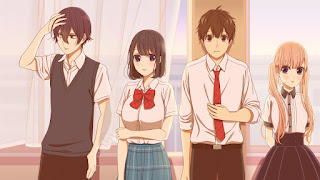 A rom-com-dram about a love triangle with a twist: in an alternate reality where the government forces teens and young adults into arranged marriages in order to increase the birth rate, one sixteen-year-old boy confesses his love to his childhood crush and finds out that his feelings are reciprocated, but then he receives a notice that he's been assigned a future wife - who, of course, is someone else. As you might expect, this leads to all kinds of complications. I enjoyed this one (especially with its catchy theme song), even though I felt that it - spoiler alert- didn't take full advantage of its premise and left me with some unanswered questions, like: why in the world would these girls fall in love with such a boring dude? Anyway...
The Way of the Househusband 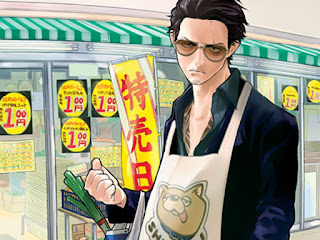 A vignette comedy about an ex-yakuza boss who retires from crime to become a househusband, this one is so laugh-out-loud hilarious I watched all five episodes on Netflix in one sitting and I want them to keep making more and more of them as quickly as they possibly can.
Thus Spoke Kishibe Rohan 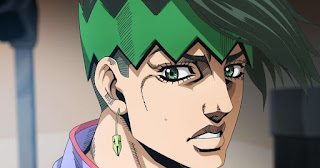 This is a spin-off of Jojo's Bizarre Adventure (covered in this Anime Roundup post) that features one of the characters from that manga/anime, the titual Kishibe Rohan, a manga artist with the ability to read and write people like a book (literally). The manga was adapted into four OVA (original video animation - in anime parlance, a direct-to-home-video film or series) episodes, of which Netflix has all four (yay). The simplest way I can describe this show is that it's a horror anthology, which is kind of a unique subgenre for anime but not all that surprising considering its source material. Also, I am very jealous of Rohan's ability.
Posted by Brian Tashima at 6:18 AM No comments:

I'm not sure, but it feels like that with this book, more so than on any of the others (except perhaps Volume One), I've really been sticking to the whole "just write whatever and fix it later" rule. Why do I say that? Because now that I'm coming up for air to assess where I'm at, I've discovered that I've made some pretty good progress, thank you very much. 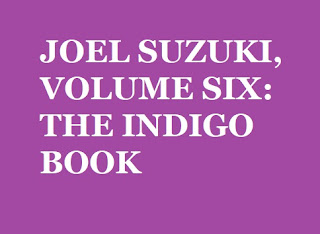 As of the last status update in January, I was at 22,000 words, or about 88 pages. As of today, I've more than doubled that output, standing at 49,500 words, or about 198 pages. Of course, there's a 100% chance that large chunks of those words are piles of hot steaming garbage that will need to be immediately thrown out, but right now, I don't actually know, because I haven't stopped to re-read hardly any of it. My whole modus operandi has been "plow ahead, don't look back" for weeks now.
But it's all good, because that's how books get written! At least, that's how my books get written. And I think most writing advice will say the same thing: for your first draft, just get words down on the page, and worry about editing and revising and rewriting afterwards (believe me, there will be lots of that going on).
And while I don't know which parts will need the most help (I'm guessing mostly all of it except the first act, which is sort of solid?), I do know that I'll need to be doing a lot of filling in of the middle section, because at the previously-mentioned 49,500 words, I'm already well into the third act, which - according to my outline - wasn't supposed to start until about the 60,000-word mark or so. I sort of expected this to happen (something similar happened with Volume Three), because I've just been speeding along plot-wise, trying to move the story forward without stopping for things like description and exposition. It's like, so here's a new character from an alien planet and a different timeline, what does it look like? Who cares! We'll figure it out later.
Anyway, that's where things stand at the moment. According to my self-imposed schedule, Volume Six isn't due out until 2023, so I'm making good time...for now. As always, stay tuned for more updates!
Posted by Brian Tashima at 6:21 AM No comments:

This week, I have good news, even better news, and great news. Okay, first, the good news: Glorified the comic book is going to be adapted into an anime series!

Actually, it's not (yet). April fools! Wouldn't that be cool, though? Anyway, on to the REAL news...no foolin'.
First of all, the Kickstarter campaign for Issue #4 of Glorified was a success!
Much mahalos to all the awesome backers who supported it. We look forward to producing the issue, which will contain the likenesses of the backers who chose the packages that gave them the opportunity to appear as characters. Right now, we're looking at a launch date of sometime in July, so stay tuned for that.
And now, the great news: we've made the decision to donate 50% of the profits from the sale of any issue of Glorified in any format to the Asian Pacific American Network of Oregon. Since I was already donating $1 for every sale of a Joel Suzuki book to Autism Empowerment, we figured that it just made sense to do something similar with Glorified in order to help make a positive difference in the world. We hope you'll join us in supporting these great causes, either by purchasing copies of the comic book or by simply making direct donations to the organization. You can find the first three issues of Glorified for sale in either print or digital format at the links below (none of which are rick rolls, I promise):
Chapter One: Eye of the Needle
Chapter Two: Ragged Town
Chapter Three: Broken Ecstasy
Arigatou! Gracias! Thank you!
Posted by Brian Tashima at 6:18 AM No comments: