The Tale Of The Missing Twelve-Pack

Recently, Facebook reminded me of a post I had written (on Facebook) five years ago called "The Tale of the Missing Twelve-Pack." I read it and thought, "Wow, that's actually a pretty cool story. I wonder why I didn't turn it into a blog post?" I couldn't think of any good reason why I didn't, and so, five years later, here is that story. 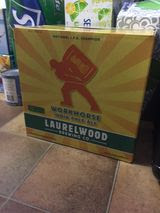 Last week Wednesday I bought, among other things, a twelve-pack of Laurelwood IPA from my neighborhood Fred Meyer. At home about an hour later, I thought, "Okay, maybe I'll have a beer with dinner." But when I looked for the beer, it was nowhere to be found!
I looked in the usual place that I store beer and other beverages. Not there. I thought, "Okay, it must still be in the car." I looked in the car. Not there. I thought, "Really? Where else could I have put it?"
After checking every possible location multiple times, I came to the conclusion that the beer was simply not anywhere within the vicinity of my house. I mentally retraced my steps. Could I have left it on the Fred Meyer U-Scan? Not likely. Could I have left it in the shopping cart? Possible, but not probable. Could it have been stolen by wizards, or perhaps somehow lost in the Matrix? That seemed to be the most logical explanation, so I decided to chalk it up to a learning experience and then forget about it.
Then this evening, there I was, back at the Fred Meyer U-Scan once again. As I was scanning groceries and making sure to bag cold stuff with other cold stuff, the attendant comes up to me and says, "Hey, did you lose a twelve-pack of beer last week?"
Me, attention piqued: "Why, yes. Yes, I did!"
Him: "Laurelwood, right?"
Me, pleasantly surprised: "Indeed!"
Him: "I remember you! Yeah, someone found it in a cart in the parking lot and turned it in. If you go over to customer service they might still have it."
I went over to customer service. They did not have it, but they did have a record of it. A very nice young woman there suggested that if I go over to the beer and wine department, I should be able to pick up this long-lost (okay, week-lost) twelve-pack of beer.
So I did. And the two gentlemen there were very courteous and helpful. I reclaimed my lost treasure and headed out, faith in humanity restored. At least for the moment.
Moral of the story: Fred Meyer is awesome. And so is the person who decided to turn in my purchase rather than take it home and drink it themselves.
Posted by Brian Tashima at 9:32 AM No comments:

It's time for another edition of Anime Roundup! I know, it's only been four weeks since the last one, but I've been trying to cram in as much anime as I can before other shows like Obi-Wan Kenobi (finally!) and the new season of Stranger Things (also finally!) come out.
Spy x Family 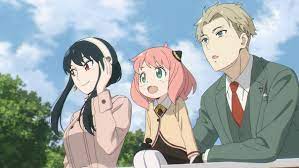 A brand-new show with a fantastic premise: a James Bond-ish superspy takes on a mission that requires him to pose as a family man, and so he adopts a young girl - who unbeknownst to him is a telepath - and enters into a faux-marriage with a woman who is actually a master assassin. All three of them have their own motives for staying in this arrangement, and only the girl knows the true identity of her "parents" (but won't reveal anything). I mean, that practically writes itself, doesn't it? Although I do wonder at times just how good of a spy the "father" really is if he isn't at least a little suspicious of his "daughter's" precociousness or his "wife's" amazing hand-to-hand combat skills. Oh well, I'm sure the plot will thicken as the show goes along; it's doing the slow-drip release strategy with only six episodes (out of 25) out so far. Manga readers, don't tell me what happens!
Blue Period 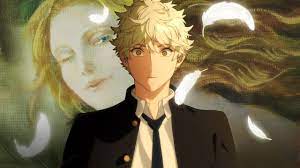 This one is an emotional drama (adapted from an award-winning manga) about a smart but directionless high school student who discovers that his life's passion is making art. The storyline mainly revolves around his efforts to get into art school, while also delving into the dramatic details of both his own personal life and his friends'. I especially liked the show's depiction of one of said friends and their gender identity issues (and the use, in the English subtitles at least, of the pronouns they/them). There are moments of levity here and there and the overall tone is optimistic, creating a nice balance with some of the heavier themes...kind of like a painting, I suppose? I don't know, I'm a writer/musician, not an artist.
Kaguya-sama: Love Is War 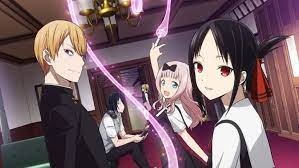 A vignette-style rom-com about two high school students - the president and vice president of the student council - who have crushes on each other but no one wants to make the first move out of fear that it'll put them in an inferior position to the other (kind of like the whole "hand" thing in the Seinfeld episode "The Pez Dispenser.") I mean, we've all been there, right? Top-notch humor writing, impeccable comic timing, and a ridiculously catchy theme song make this one tons of fun (if you've seen it, you know what I'm talking about. Sing it with me now: "Love is war / Love is war / Love is waaaaaaar")
Bofuri: I Don't Want to Get Hurt, So I'll Max Out My Defense 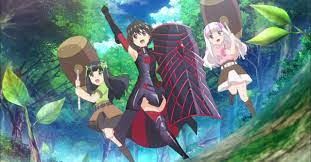 Don't you just love that title? I did, so I had to check it out. What I found was what I think can be most accurately described genre-wise as slice-of-life meets virtual reality isekai (portal fantasy) - kind of like K-On! crossed with Sword Art Online. Seriously. The main character is a girl with limited experience in video games who, at the behest of her gamer friend, begins playing a VRMMORPG (virtual reality massively multiplayer online role-playing game, say that ten times fast) and, not wanting to get hurt, puts all of her experience points into her defensive stats while neglecting everything else (strength, agility, etc.). It's a strategy that on paper shouldn't work, but when combined with her resourcefulness and general naivete, leads to her leveling up so much that she quickly and almost accidentally becomes one of the game's strongest players. In true slice-of-life fashion, most of the show just focuses on her and her growing group of friends/co-players playing the game and leveling up without much in the way of real stakes or drama - if you die, you just log back in the next day - and believe it or not, it works. (Maybe the stakes get higher later on? Manga readers, don't tell me what happens!)
Den-Noh Coil 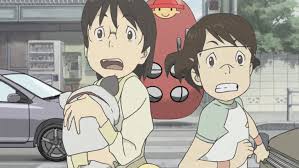 Now here's a show that was ahead of its time. It came out in 2007 and depicted a near-future where AR (augmented reality) and MR (mixed reality) technology is immersive and commonplace, with most schoolchildren owning and wearing AR glasses that allow them to interact with their environment (while also doubling as phones). In addition, it features other tech that wasn't really established in 2007 but is more well-known now, like wearable computers, self-driving cars, and virtual currency. Netflix recently picked it up and I was drawn to it since my own project Four-D also features kids wearing smart glasses, although they use it not for AR but to see into the fourth spatial dimension (if that sounds good to you and you are an executive producer or investor or someone with deep connections in the entertainment industry, let me know).
Until next time, mata ne!
Posted by Brian Tashima at 12:50 AM No comments:

At the last update eight weeks ago, I said that Joel Suzuki, Volume Six was ready for a line edit, and that Volume Seven was up to 16,000 words (around 64 pages). 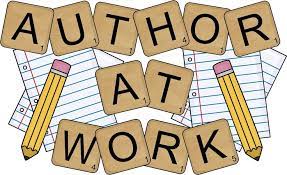 What a difference two months makes! Since that previous post was published, Volume Six has been fully line-edited, and all the accepted editorial revisions have been applied. I even finished the back cover copy. Now, it's just a matter of doing the formatting and getting the cover art done. Look for a subtitle announcement in the near future!
As for Volume Seven, it's now up to 30,000 words (around 120 pages). The way it's going so far, when this volume is finished I think it'll be the longest installment in the series by far at an estimated 100,000 or so words (400 pages, yikes!), surpassing Volume Six's 90,500 words (362 pages). I hadn't originally planned it that way, but I guess it makes sense considering that it will be the epic finale to the whole seven-book arc.* We shall see. Either way, I'm really enjoying writing it, which is always a good sign. Stay tuned for more updates!
* Long-time readers of this blog and/or fans of the Joel Suzuki series may recall this post that talked about the possibility of there being Volumes Eight through Eleven, which, if they happen, will probably be "post-adventures" that happen outside of the main seven-volume story.
Posted by Brian Tashima at 7:05 AM No comments:

A couple of months ago, I wrote a blog post celebrating Hinamatsuri, or Girls' Day, which happens every March 3rd in Japan and Hawaii. Since it fell on a Thursday/blog day this year, I figured that a post would be appropriate.
There's another Japanese holiday that happens every May 5th that used to be called Boys' Day but was apparently changed to Children's Day ("Kodomo no Hi") when I wasn't looking BACK IN 1948 WHAAAT? This year, it too falls on a Thursday/blog day, hence this post. 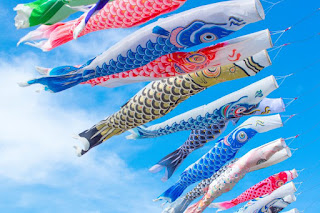 The funny thing is that I always knew it as Boys' Day, even though I've lived literally my entire life during the time after the name was changed (I'm old, but not THAT old). Maybe Hawaii just never got the memo. Suffice it to say, though, that I completely approve of the change.
In Japan, Children's Day caps off something called Golden Week, which is the period between April 29 and May 5 in which four separate holidays are celebrated and a lot of people just generally take the entire week off. The history of Golden Week is rather complicated, with days changing and moving and being added or subtracted (during the early days of Covid it was rebranded as "Stay Home Week" and extended in both directions) but the bottom line is that it sounds like a fun time that I wish we had here in the States.
Anyway, Happy Children's Day to all!
Posted by Brian Tashima at 7:32 AM No comments: