New Year's Resolutions By People From The Joel Suzuki Universe

Happy New Year, everyone! What are some of your resolutions? 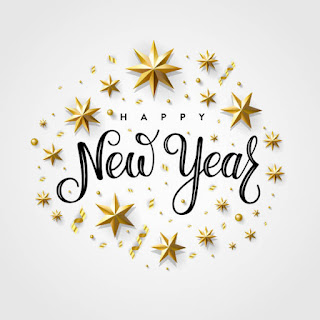 Joel: To spend more time outdoors.
Felicity: You already spend a lot of time outdoors in Spectraland.
Joel: I know. I mean when I'm at home on Earth.
Felicity: Whatever.
Joel: What are your resolutions?
Felicity: To drink less diet soda. That stuff will kill you.
Taylor: To play less video games and read more books.
Alison: To be more patient with people.
Art: That's a good one.
Alison: Well, it was your suggestion.
Art: I'll try to stop giving so much unsolicited advice.
Alison: That's your resolution?
Art: Yup.
Alison: Ha. Good luck with that.
Fireflower: "New Year's resolution?" What is that?
Felicity: It's when you say you're going to do something but then after a couple of weeks you end up not doing it any more.
Fireflower: I see. What a curious custom. In that case, I resolve to stop playing pranks on others.
Felicity: Nice one.
Lydia: I'll be 100% positive and hopeful during baseball season, no matter what happens.
April: Wow, seriously?
Lydia: Seriously. Also, you heard what Felicity said, right?
April: Oh. Right.
Lydia: What about you, Brian?
Brian: Hmm, let's see... I resolve to work hard every day on revisions and rewrites for Volume Six of the Joel Suzuki series in the hopes of publishing it before the end of the year.
April: What is the "Joel Suzuki series"?
Lydia: Sounds like a book series that has something to do with your cousin, obviously.
Joel: Who, me?
Felicity: Do you see any other April's cousins around here?
Alison: You're writing a book series about my son?
Brian: Okay, gotta run. Happy New Year!
Posted by Brian Tashima at 12:42 AM No comments:

From all of here at the Brian Tashima Blog and the Joel Suzuki Series, we hope you have a wonderful and safe holiday season. 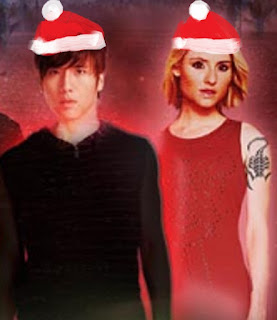 Felicity: Dude.
Joel: Me?
Felicity: Yes, you. Do you see any other dudes around here?
Joel: I thought Brian was here.
Felicity: Nah, he's mailing it in. The intro to this post is just a copy-and-paste from last year's.
Joel: Oh yeah, you're right.
Felicity: Anyway, I was gonna say - he's making us wear these badly-drawn Santa hats again.
Joel: I know.
Felicity: Isn't that irritating to you?
Joel: I guess.
Felicity: Well, it's irritating to me.
Joel: Okay.
Felicity: So, I say this year, we get back at him.
Joel: How are we going to do that?
Felicity: Let's put cat litter in his chili.
Joel: That seems pretty mean.
Felicity: You think so?
Joel: I do.
Felicity: Okay, well, do you have any ideas?
Joel: Hmm...
Felicity: Oh, I know, how about we hide the TV remote.
Joel: But then we can't watch TV, either.
Felicity: Yeah, you're right.
Joel: We should probably do something that is equally annoying to him making us wear these hats. That way, it'll be, you know, equal.
Felicity: True.
Joel:
Felicity:
Joel:
Felicity (snaps fingers): I got it. Duh, it was so obvious.
Joel: What was?
Felicity: This.

Joel: Good one.
Felicity: I know.
Posted by Brian Tashima at 1:15 AM No comments:

Time for another edition of Anime Roundup!
Tokyo Revengers 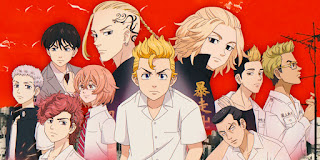 When a 26-year-old video store clerk learns that his ex-girlfriend and her brother have been killed by gang violence, he travels back in time to when he was a middle school delinquent-wannabe in an effort to change history. It's kind of like Erased crossed with, I dunno, West Side Story? Sons of Anarchy? I don't actually watch gang-related stuff, normally, but this show had a lot of hype and ended up being a pretty fun (and violent) ride. Question: just how many crowbar hits to the head can a teenage gang member take without going down? Answer: Many, apparently.
Cowboy Bebop 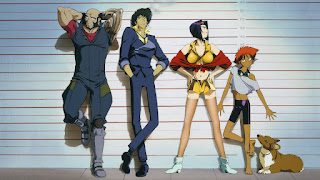 A classic show from 1998 about a group of bounty hunters in the year 2071 who bounce around the solar system trying (and usually failing) to scratch out a living while occasionally facing people and events from their traumatic pasts, I can see why it's considered to be one of the most groundbreaking and influential anime series of all time. I also sampled the live-action version, which I found to be a pretty cool reimagining/remix of the original. I know some people might disagree with me on this, but I think it's too bad that it's been cancelled (the live-action version, that is).
Komi Can't Communicate 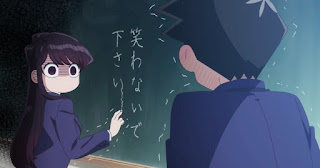 A slice-of-life comedy about a high school girl who suffers from extreme social anxiety, this is a fun show that manages to deftly handle a variety of potentially sensitive subject matter while still being entertaining. In a departure from their usual modus operandi, Netflix is only releasing one episode a week, so as of this writing I'm not done with the first season yet, but rest assured that I will watch it to the end. Do Komi and Tadano eventually get together? We shall see! (manga readers, don't tell me.) Also, Najimi is just the best.
Anime-Gataris 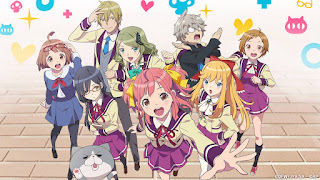 Crunchyroll has a category of shows called "anime about anime." After watching Keep Your Hands Off Eizouken!, how could I resist? Anime-Gataris is a kawaii (cute) show that starts off like a light and fluffy slice-of-life comedy about a group of teenagers who form an anime club at their high school, but then eventually grows into - spoiler alert - something much more meta as it goes along, eventually culminating in one of the wildest finales I've ever seen for something of this genre (and, as a fan of meta-ness, I loved every moment of it).
Princess Mononoke 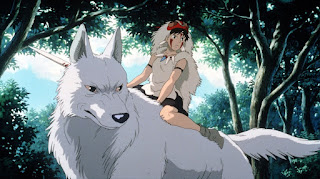 Since the time I really started getting into anime (back in May of 2018, to be precise), I've watched over a hundred shows (at least the first season) or movies. No, seriously, I have. But I don't think you can consider yourself a "true" anime fan unless you've seen the Studio Ghibli catalog. So, to that end, once I got HBO Max I started with Spirited Away, and the moved on to this 1997 classic. The basic summary is that it's a story of the struggle between humans and nature involving mostly a young prince and a girl raised by wolves, but there's so much more to it than that. You really have to watch it to get a complete understanding. Just know that you're not going to get a simple good-versus-evil kind of tale, and that at times it will be hard to know exactly who to root for. It's complex, groundbreaking, mature, and totally deserving of all the accolades.
Android Kikaider: The Animation 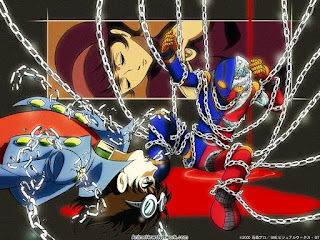 Not sure how I missed this one? A 2000-2001 anime adaptation of the live-action tokusatsu show from the '70s, it's a much darker interpretation of the story that also takes care to patch a lot of plot holes and inconsistencies from the original (like why Jiro would often abandon Mitsuko and Masaru at the end of episodes). I have to admit, when I first started watching it, I didn't care for it - I think my exact words were something like "this makes more logical sense than the live-action version, but it completely drains it of the fun and the charm. It's just all sadness, all the time." But as it progressed and my mind stopped subconsciously comparing it to the original, I got used to the tone and by episode 7 or so (out of 13), I was completely enthralled. I especially appreciate how it tried to be its own thing (and succeeded) while still paying homage to its source material. Also, the classic anime art style is pretty nifty. Do people still say nifty? I just did.
Posted by Brian Tashima at 1:36 AM No comments:

While Volume Six is with my esteemed editor this month, I have started working on (gasp) Volume Seven. 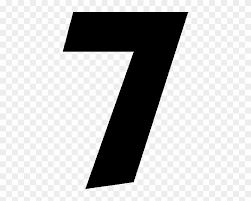 Can you believe we've gotten to this point already? I mean, I know I've been doing this whole Spectraland Saga/Joel Suzuki/blogging thing for nearly a decade now, but...c'mon. It feels like just yesterday that I was struggling with Mystery of the Moonfire/Volume Two (actually, it's been eight years).
In case you're new here, Volume Seven will be the final entry in the main story arc of the Joel Suzuki series. There are plans for four additional volumes, but they will be "post-stories" that deal with events that happen after the primary adventure is complete (there will still be stakes and conflicts, possibly even very large ones, but that's a subject for another day).
I'll save details about Volume Seven for future status update posts, but for now, suffice it to say that I am up to 1500 words, or about six pages. Yes, I know, not much, but everything has to start somewhere. My hope is to finish at least the first chapter or two before the end of the month when the Volume Six draft comes back from my editor and I start the revising/rewriting process in earnest, but seeing as it's the holiday season, who knows if I'll actually get there. At the very least, I'll have a little bit of something to read several months(?) from now (when Volume Six goes back to my editor for a line edit), after which I will either say "well, that's off to a pretty good start" or "what the heck was I thinking?"
Posted by Brian Tashima at 1:39 AM No comments:

Boots Does Not Care That You Are Trying To Watch Avengers: Endgame On Cable TV 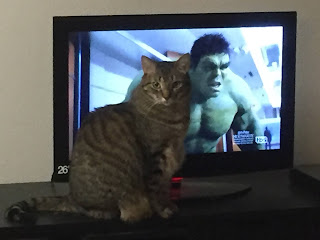 Me: Excuse me, sir.
Boots: Wot
Me: Move, please.
Boots: No
Me: Aw, c'mon.
Boots: Why are you even watching this, anyway?
Me: What do you mean
Boots: I mean, you've seen this movie a million times already.
Me: I know, but -
Boots: While you're watching this, there are tons of other shows and movies you haven't seen, yet claim to want to. I mean, have you checked your streaming queues lately?
Me: Right, I get your point, but sometimes I just want to veg out with something familiar.
Boots: If that's the case, then why are you watching this on cable?
Me: Um...
Boots: You do know you have Disney+, right?
Me: Yeah.
Boots: Then why aren't you watching this on that? It's commercial-free and you're already paying for the service.
Me: This is just easier since it's already on.
Boots: It takes literally four clicks of a remote to pull it up on your Fire stick.
Me: True, but there's just something communal about watching it on live cable TV. It's like, you're subconsciously aware that there are other people watching this at the same time you are.
Boots: Humans are so weird.
Me: We are. So could you scoot over, just a little?
Boots: Nah
THE END
Posted by Brian Tashima at 1:55 AM No comments: