Here are a couple of fun things to do this week! 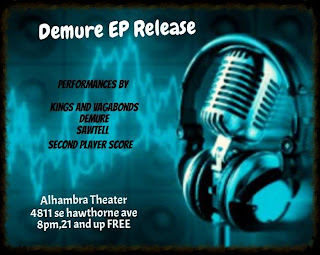 Come and rock out with me and my band (Second Player Score) as we help our friends in Demure celebrate the release of their debut EP. 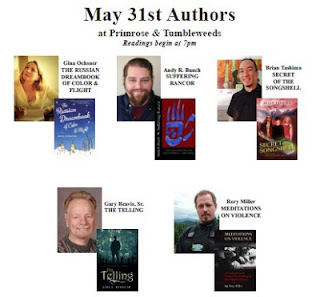 Then the following night, head on out to historic downtown Hillsboro where I and several other local authors will be reading from our books, signing autographs, and drinking delicious beer.

* Because there is no charge for awesomeness. Or attractiveness.**

** Bonus points if you know what movie that's from
Posted by Brian Tashima at 7:32 AM No comments:

Secret of the Songshell Factoids

- The part on page 2 when Joel notices the error on the Junior Prom poster was based on a real-life incident involving my son. He pointed out that a certain book cover with a picture of a calendar on it repeated the same day twice (unintentionally, I believe). This incident was actually the original inspiration for Joel's Sight power.

- The inspiration for Marshall's age (27) came from something called the 27 Club, which you can read more about here.

- Felicity got her scorpion tattoos as a tribute to her deceased parents, each of whom was a Scorpio. Originally, there were a few lines in the book that explained this, but I took them out because they didn't really fit.

- I didn't find this out until later, but there's a street called "Prism Valley Drive" in Indiana! Mahalo to my friends Jeff and Evelyn for taking this picture: 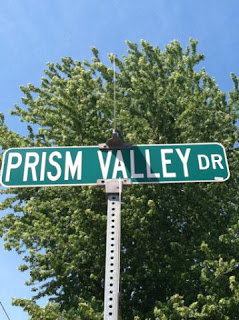 - Before I even solidified the concept for Songshell, I asked my kids: What is one thing you would like me to include in this book that I'm planning to write? My son said "powers," meaning magical or superhero-like abilities, and so that's where the whole wavecasting thing came from. My daughter said "a cute animal." Sammy the silvertail owes his existence to her.

Posted by Brian Tashima at 10:36 AM No comments:

You would think that, as a musician writing books about musicians, I would listen to music while I wrote. But to be honest, I tried doing that when I was first drafting Book One, and frankly, I found it to be quite distracting. My brain would start to gravitate toward the lyrics, the chord progressions, and whether or not the particular band I was listening to might possibly be coming through town.

However, as I was working on Book Two [ed. which is up to 26,000 words], I stumbled onto an awesome discovery: "Epic Music Mixes" on YouTube.* 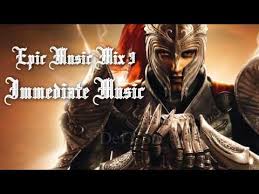 I found that these marathon videos (some are eight hours long) were the perfect background soundtrack to my particular brand of writing. Go ahead - play one of them. After a few minutes, it'll become obvious that these things sound like an endless loop of music from a sci-fi/fantasy movie trailer. For me, they provide great atmosphere that inspires my writing without being distracting.

So for all you fantasy authors out there, try putting one of these on while you compose your masterpiece. It just might help you bring that movie in your head to life.

* I stumbled onto these as I was listening to The Legend of Zelda 25th Anniversary medley, which, itself, is an excellent epic music mix.
Posted by Brian Tashima at 10:47 AM No comments:

At the Load Local/3rd Birthday Party @ Jacobsen's Books yesterday, there were: 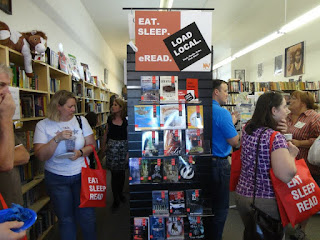 Answer after the jump. Thanks to Tina and Eric Jacobsen for throwing a great party!

Read more »
Posted by Brian Tashima at 8:52 AM No comments:

This coming Saturday, May 4th, I'll be at Jacobsen's Books in Hillsboro to help them celebrate both their 3rd birthday as well as the launch of the Load Local program.

Load Local is a new and unique way of buying books. And don't just take my word for it, read the press release:

"Looking to discover something new and intriguing? With over 30 titles in 9 different genres, Jacobsen’s will now offer top-selling local independent authors in a boutique-style experience. Many of these authors will be on hand for the launch at Jacobsen’s anniversary party.

Sponsored by NIWA (Northwest Independent Writers Association), Load Local allows readers the comfort of browsing the stacks, flipping through the paperback that catches their eye, while still enjoying the cost-savings of ebooks. Once they find that new literary treasure, they simply take the paperback to the counter and the ebook file is emailed to them upon check out. No more snapping discrete cover photos and trying to remember to buy it online later. Your reading dollars stay in the local community, supporting local authors and local business."

Couldn't have said it better myself. So if you're in the area, stop by between 4 and 7pm and check it out!