Just wanted to give a quick mahalo to NIWA, Hillsboro Public Library, and Jacobsen's Books for organizing a fun and successful event last night! Also thanks to everyone who came out and chatted with us. 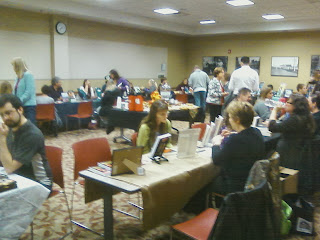 Next up on the event schedule: Orycon! As always, keep watching this space for details...

Posted by Brian Tashima at 9:01 AM No comments:

- I'll be at NIWA's Speed Date an Author event next week Wednesday, October 30, from 6:30-8pm at the Hillsboro Public Library. Check out this link for more details!

- Book Two is making progress. I took some time to step back and work on plots and arcs for the series as a whole, which I feel was a really good decision (after I came up with an idea for one of the future books, I thought to myself, "Boy am I glad I didn't commit to something else in Book Two already!") 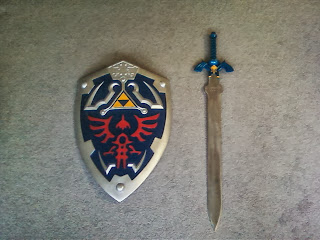 - Currently being played: Wind Waker Wii U (working on the Withered Deku Tree side quest) and Xenoblade Chronicles (just started the Entia Tomb).

Posted by Brian Tashima at 11:22 AM No comments:

As I may have mentioned in an earlier blog post, I was a voracious reader of fantasy books as a child. During my current search for inspiration and ideas for The Spectraland Saga, my thoughts turned to some of my favorite series from that bygone era...and so now, I present them to you as recommended reading.* 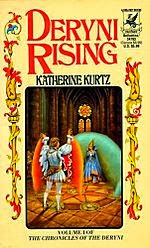 About a race of people with magical psychic powers, at times these books resembled historical fiction with their realistic portrayal of political and religious conflicts in a medieval setting. 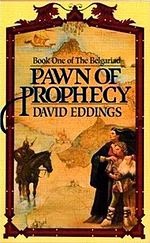 A five-book series with lots of good ol' fashioned swords and sorcery.

The Chronicles of Thomas Covenant 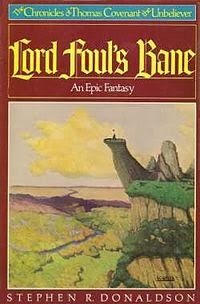 Disclaimer: this series consists of ten books, but I only read the first six (the ones that came out before 2004). A bit darker in tone than other series with a protagonist that takes some getting used to, it nevertheless was deeply affecting and influential. 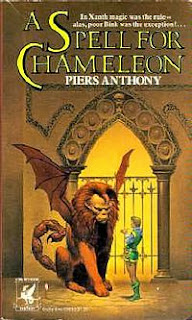 Disclaimer Part Two: I read the first, oh, maybe nine or ten books in this series and then stopped after that. I mean, c'mon, there are over thirty of these things! The ones that I did read were - in true Piers Anthony fashion - fun, playfully irreverent, and maybe just a little un-PC. 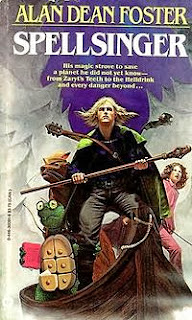 A series about a law student/janitor/guitarist who travels to another dimension where he can perform magic by playing rock songs on a special guitar-like instrument. Hey, that sounds kind of familiar! Not to worry, I re-read this before writing Book One and although they share that similar element, they are very different stories (and wavebows function in a more scientific manner than Jon-Tom's duar, which is like - need some kind of transportation? Play "Little Deuce Coupe" by the Beach Boys.)

So there you have it: some of my favorite books from my youth. Keep in mind that - if you're worried about this kind of thing - these books are not as kid-friendly as, say, Harry Potter/Percy Jackson/Joel Suzuki and the like. But they're good reads nonetheless.

* If you, like me, have a backlogged stack of books so large that you have to prioritize your reading, read [shameless self-promotion alert] Book One and other NIWA books first!

Posted by Brian Tashima at 7:09 PM No comments:

The Portland Fall Home & Garden Show was a huge success as NIWA beat its previous record for book sales in one event! Much mahalos go out to my friend and fellow author Roslyn McFarland (check out her brilliant debut, See No Sea) for organizing everything and being all-around awesome. 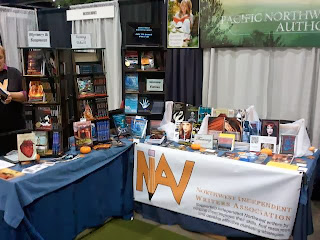 Also, Book One has been chosen as the NIWA Indie Book of the Month for October! To celebrate, I'll be having an online author interview & chat session next Tuesday, October 15th from 7pm-8pm, hosted by fellow author Jamie McCracken. The link to join in is here. Thanks to Amber Cook and Pam Bainbridge-Cowan for setting everything up. Check out their books as well!

Then, on October 30th, I'll be at another Author Speed Date event in Hillsboro. Mark your calendar, and keep watching this space for details....
Posted by Brian Tashima at 9:14 AM No comments:

Another local area event! Come on down to the Portland Fall Home & Garden Show this weekend and head straight to Booth 930, where the ever-awesome Northwest Independent Writers Association will be showcasing and selling books by its esteemed membership. 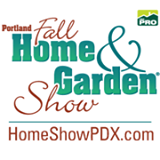 I will be there personally (not in spirit - in person) on Friday night from 5-8pm and again on Saturday morning from 10am-1pm. Get your copy of Book One signed (or buy one if you haven't already) and check out other great books by my fellow local authors. See you there!
Posted by Brian Tashima at 10:57 AM No comments: