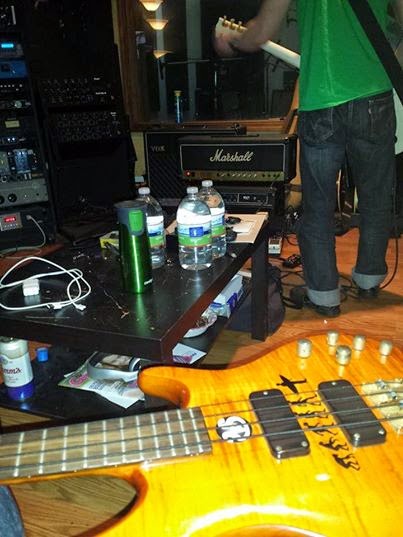 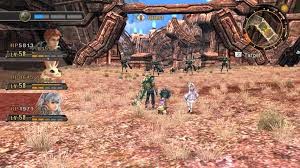 A lot of the story makes more sense now that I know how it all ends. When my daughter and I watch the cut scenes now, we say stuff to each other like "Oh, so that's what that was about!" and "No! Don't believe him!" which is always good geeky fun. Plus, I finally finished the side quests that get me into King Agni's Tomb, so awww yeahhh
Posted by Brian Tashima at 6:51 AM No comments:

Going with the "if it's expensive, it must be good" axiom, we tracked down what was, at the time, one of the premier recording studios in Hawaii, where a lot of the local luminaries had created their albums. This was during a time when songs were recorded through 24-channel mixing boards to 2" tape - whaaat? - so there were no quality home recording/Pro Tools-type options that are available to bands today.
The miscalculation we made, however, was that most of the local luminaries were what people call "Hawaiian Music" bands - bands whose material consists largely of mellow, folky-type music played on acoustic stringed instruments (including, of course, the ukulele) and not-loud drums. As pop-leaning as our sound was, we were still a rock band, with Marshall amps and a drummer who was at his best when he played at high volumes.

As a result, the five songs that we recorded came out fine, considering our lack of studio experience, but there was something lacking...namely, the energy and punch that we usually brought to our live performances. It was nobody's fault, really - just one of those learning experiences that you have to go through to get to the next level.

So anyway, having invested a decent chunk of change into the sessions, we did our best to salvage the situation. We took the recordings to a different studio to get it mastered, and they did their best to squeeze every last ounce of oomph they could out of the tracks. We printed up a bunch of stickers that said "digitally mastered to be played LOUD" and hand-applied them to each of the 1,000 CDs that we ordered. We named the EP "Fixed" to indicate that we had "fixed" whatever perceived problems there were with the original recordings.*

Despite all of our hand-wringing, Fixed ended up getting a pretty good reception. "Shampoo" was played on radio stations not only in Hawaii, but nationally and internationally as well (we actually received a performance royalty check for airplay in the U.K. - a small one, but cashable nonetheless.) The song was even included on one of those piped-in music services that you hear in restaurants and mall stores, and because of that, it attracted the attention of a music video producer who heard it while having lunch at a hotel in Los Angeles, where he was attending film school. Being originally from Hawaii, he approached us about doing a video for the song, and you can see the result here.

We were interviewed in music magazines, won a few local awards, and played a ton of shows, including a brief tour of the San Francisco area (which is another story in itself). We were even one of the first bands from Hawaii to have our own website - whaaat? - in addition to being included on other pioneering music-related sites like this one.

So it seems like things were happening, right? World domination, just around the corner? Well, remember the title of Episode 5 of this serial: "It's a long way to the top if you wanna rock 'n' roll."

Next: The Summer of the Angry Young Man

* Or did we name it that because we felt our sound had been neutered? Um, I forget. Never mind
Posted by Brian Tashima at 10:03 AM No comments:

Before you start reading this blog post, go ahead and crank up the song "Chosen One" by my band, Second Player Score. You can find it (and even download it for free!) at this link. I'll wait.

Okay, now on with today's post. The idea of a Chosen One - a person who is predestined to save the world or perform some other similarly heroic deed - is a rather common trope in fantasy and science fiction, from books to movies to video games.

The thing is, though, since it's so common, what you end up with is a whole bunch of Chosen Ones running around, beating up the bad guys and saving the world. Isn't a Chosen "One," by definition, supposed to be singular?

So, there's only one way to settle this: with a Chosen One-On-One Battle. Let's begin! 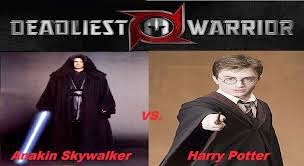 There are a bunch of opinions about this particular battle all over the Internet, but I'll give you mine: even though Harry has a lot more options at his disposal (a whole range of spells versus The Force + a lightsaber), I think Anakin takes this one. This is how I see it going:

- Harry casts Expelliarmus, ridding Anakin of his saber
- Anakin retaliates by using the Force to rid Harry of his wand
- Without a wand, Harry can't cast any spells
- While Harry is scrambling for his wand, Anakin uses the Force to retrieve his lightsaber and/or choke Harry or whatever

There you go. Or, maybe it would go something like this.

Zael from The Last Story vs. Shulk from Xenoblade Chronicles 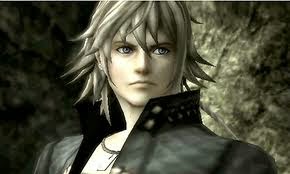 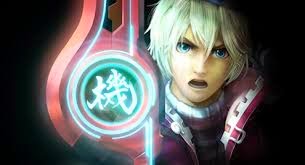 This is a tough one. Zael has the Mark of the Outsider, while Shulk can see the future. Zael is stronger and more battle-trained, but Shulk's Monado sword beats any weapon that Zael can scare up. I dunno...I'll just flip a coin and go with Zael. I think Nintendo should cave in to popular demand and put both characters in the next Super Smash Bros. game so then we can find out for real. 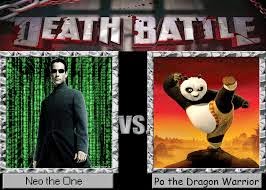 At first, I was surprised that other people besides me actually thought about this one. But to quote Albus Dumbledore, "actually, if I think about it, it doesn't seem curious at all." Both Neo and Po are martial arts experts, and they each have some special moves at their disposal - Neo can fly, while Po has the Wuxi Finger Hold and, of course, a belly that is impervious to most attacks. Assuming that Po lives in a version of the Matrix, though, I'd have to give the edge to the man formerly known as Thomas Anderson. Also, if Neo got into trouble, he'd just have to run up a long flight of stairs...

So there you have it: Anakin, Zael, and Neo. And then if the three of them were to get into it, I'd say Anakin - in a landslide. Darth Vader rules! 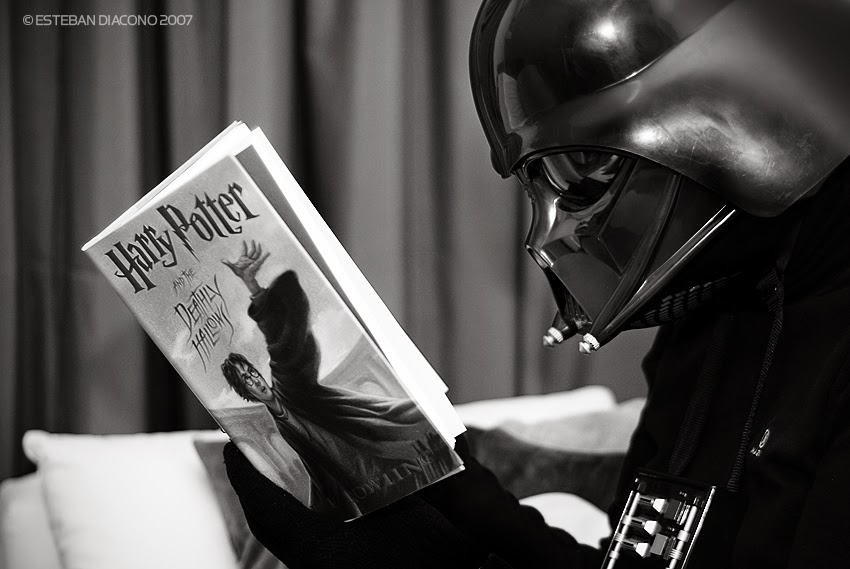 What do you think?
Posted by Brian Tashima at 7:01 AM No comments:

I don't know why, but I've always believed in the power of a name - like, you know, "Max Power." I like band names that are original, simple, and convey a sense of what the band sounds like. Bonus points if the name is a cool or interesting reference to something meaningful to the band members (or is an inside joke). Usually, a unique combination of basic words seems to work best - Soundgarden and Mudhoney are good examples.*
So anyway, The Krayons was an okay name for a casual indie-pop-rock duo playing to pre-recorded bass and drum tracks at shopping malls, but since we were now going to be a "real" band again and do all kinds of cool stuff, we decided that we needed a new, "real" name. Something that we would put some actual thought into, not like previous names that we had just come up with on the fly. Something that would meet the criteria I mentioned in the first paragraph - original, simple, and reflects the bands' sound.

Now, it's hard enough coming up with a "real" band name on your own (see: "The Krayons"), but when you throw several other band members and their opinions into the mix, it can get downright Rubik's Cubish. We brainstormed a really long list of ideas that included such memorable gems as Brainglow Steeple and Beat Up The Bad Guys, before finally settling on...drum roll...Tone Deaf Teens.

Okay, I know what you're thinking, it probably wasn't the greatest name in the world. But hey, it was original - check, simple - check, and it at least sort of captured the essence of the quasi-pop-punk sound we had at the time (we would joke that it was named after our fans). Also, it sounded good as a pre-show or encore chant ("Tone! Deaf! Teens! Tone! Deaf! Teens!" You get the picture.)

With that taken care of, we were now free to make stuff - stickers, press kit folders, t-shirts, the whole nine yards. Which we did. At the same time, we prepared ourselves to go into the studio and record five songs, including Shampoo (the song I wrote in five minutes that sort of prompted this whole endeavor). This was going to be my first experience in a "real" recording studio - the dorm bathroom where R.F.H. recorded doesn't quite count - and I was really excited and looking forward to it. But, as you know by now, whenever rock 'n' roll is involved, things don't always turn out how you expect them to.

Got a lot of stuff to do today (including getting some delicious grub at the Menchies/Five Guys Burgers & Fries Autism Empowerment Fundraiser), so I'll make this quick:

- Living in the Vancouver/Portland area, I've been a fan of the Portland Trail Blazers basketball team.

- On page 226 of Book One, there is a part that says "It is amazing what can happen in a single second...members of a basketball team can throw an inbounds pass, catch it, turn, then shoot the ball twenty-five feet through the air into the hoop and win the game."

- Last night, at the end of the Blazers' playoff game against the Houston Rockets, that very thing happened:

'Nuff said. Go Blazers!
Posted by Brian Tashima at 9:10 AM No comments: