Okay, you could not have asked for better weather for an outdoor egg hunt. It felt like the middle of summer.
Kudos to Karen and John at Autism Empowerment for organizing and conducting this great event, and a big mahalo goes out to all the volunteers who helped make it a success.

I had the pleasure of meeting in person McNall Mason and Max Suarez from Max N Me Studio. As I mentioned in a previous blog post, McNall and Max are the authors and illustrators of Max From The Planet Of Cool and other awesome children's books that help raise money for various charities. I highly recommend checking them out.

﻿
Thanks to everyone who bought a copy of Book One (I'm going to be referring to Secret of the Songshell as "Book One" a lot from now on), and thanks to my table-neighbor Annie Lamberto for letting me hide under her shady portable shelter.

Speaking of which, Annie is the chairperson of the Southwest Washington Special Education Conference and Resource Fair, which provides resources to families of children with special needs. For those of you in the Portland/Vancouver area, the fair is a free event that will take place on Saturday, April 27th from 9am-5pm at Prairie High School. Copies of Secret of the Songshell - um, I mean, Book One - will be given away as door prizes! 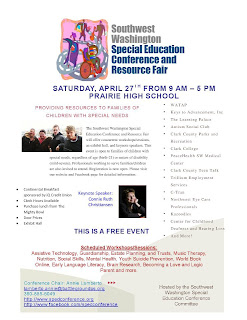 For those of you in the Portland OR/Vancouver WA area, here are some upcoming events that I - and more importantly, my book - will be making appearances at: 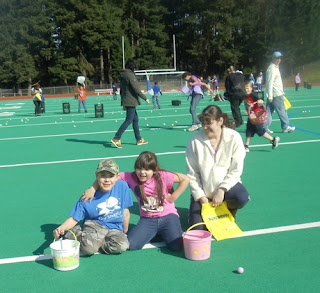 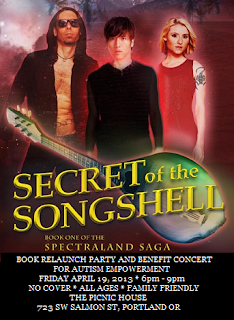 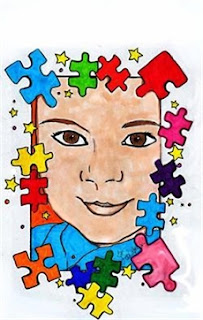 ﻿
﻿
All three events are for great causes and promise to be a lot of fun, so check them out! You know you want to...
Posted by Brian Tashima at 10:54 AM No comments:

The new cover for Secret of the Songshell is here! Go to the Facebook page for The Spectraland Saga to check it out (while you're there, don't forget to hit the "Like" button if you haven't done so already.) Much thanks goes to graphic artist extraordinaire Purnima Prasad for her awesome work.

What are you waiting for? Go to the Facebook page now!

Posted by Brian Tashima at 8:15 AM No comments:

My band Second Player Score went into the studio last week. We spent a day recording one song - a fun little tune called Sad & Glamorous. You can listen to it here. 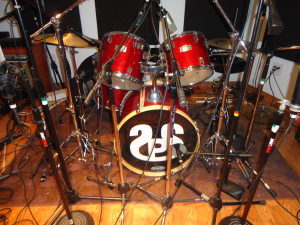 Someone asked me recently which I prefer: playing music or writing.

For me, playing music is immediate, active, physical and visceral. I pick up my guitar and dive right into it. It's also a very social activity. When I'm playing music it's usually with other people, unless I'm learning a song off of a recording - in which case I'm still playing with other people, they just aren't in the same room as me. When I'm performing, I get instant and obvious feedback from the people in the audience.

Writing is more passive, intellectual, and solitary. To be honest, there are times when I find it a bit of a challenge to "crank up" into a writing state of mind. Once I'm there, however, and I get into a groove, reality slips away and I can lose myself for hours in the world that I'm creating. It's a pretty cool experience, I must say.

So really, even though both activities are creative and artistic outlets, it's hard to compare them to each other. I would say that playing music is like eating (the body is active), and writing is like sleeping (the mind is active). I enjoy doing both very much, and I wouldn't be able to live without either of them.

Any author/musicians out there? I'd love to hear your take on it.
Posted by Brian Tashima at 11:29 AM No comments:

Want to know what the title of Book Two is going to be? Want a little teaser of what the book will be about? Want to know when it will come out? Check out this guest blog post that I did for Autism Empowerment!
Posted by Brian Tashima at 12:28 PM No comments:

You may already know that The Spectraland Saga is going to be a series that contains seven different main installments. But what you may not know is the reason I decided to make it a seven-book series, rather than a trilogy, or a five-book series, or whatever. Perhaps I wanted to imitate good old Harry Potter or the Chronicles of Narnia? Maybe I felt that Joel's tale would take seven volumes to adequately tell? Maybe I wanted to guarantee that I had no free time for the next fifteen years?

While those are all good reasons (with some kernels of truth to each), the primary reason is actually this: I wanted each book in the series to represent a color on the spectrum as described by the famous 17th century scientist, Isaac Newton.

﻿
Besides the obvious "spectrum" reference (spectrum disorders), I loved how Newton believed that there is a connection between colors and musical notes.* If you're familiar with Secret of the Songshell, then you know that music plays a significant role in the story.

I also liked the fact that Newton's use of the word "spectrum" originated from his work with light waves. In Spectraland, waves of light, sound and other forces make up what is known as the Aura, a field of energy that Joel and others with his ability are able to manipulate through the use of musical instruments called wavebows.

Also, in the first chapter of Songshell, there's a Newton reference that I wrote before deciding on the whole seven-book series thing, where Joel - a huge Isaac Newton fan** - talks about Newton's theory of air resistance (which turns out to be a pretty significant plot point later on). Pretty cool coincidence, I must say.

And finally, I had always envisioned the overall tone of the series getting darker as it went along, and that tied in perfectly with how the spectrum of colors eventually progresses to indigo and violet. So, Secret of the Songshell is the "Red Book." Book Two will be the "Orange Book," Book Three will be the "Yellow Book," and so on. Remember the rainbow color acronym ROYGBIV? Yeah, it's like that.

Anyway, now you know why I'm planning to write seven of these things. And I can't change my mind even if I wanted to, because who ever heard of a rainbow with less than seven colors?

* Originally, I toyed around with the idea of subtitling Songshell "Book D" (since Newton assigned the music note "D" to the color red) and so forth, but I figured that doing so might be getting a little too esoteric. Who knows, maybe I'll revisit that idea someday.

** According to Wikipedia, the Cambridge psychologist Simon Baron-Cohen considers it "fairly certain" that Newton had Asperger's Syndrome.
Posted by Brian Tashima at 2:53 PM No comments: