It's been over a month since I wrote a post about Book Two's progress. I re-read that post today and realized, much to my dismay, that my word count is almost exactly the same as it was over a month ago. I feel like I've been writing like crazy (including thinking up plot points in my head), so how in the world is that possible?

Well, for starters, I re-wrote an entire chapter not once, but twice during that period of time. The second re-write was just meant to be a quick clean-up, but it ended up turning into a complete purge-and-start-over, which I seem to be doing more and more often these days.

Also, a lot of the "writing" that I feel like I've been doing has actually been more like "editing," where I'm spending a lot of time re-reading earlier chapters and making minor tweaks and adjustments here and there.

Fortunately, I attended a NIWA social gathering this past Sunday, where I was indirectly reminded of an important concept: your first draft is just that - a first draft. I had forgotten about the method I used to write Book One, which was to turn off the internal editor and just write something, anything, just to get the words down on paper, and then go back and fix it up after the whole draft is done.

So at the risk of jinxing myself, I can say that I now feel like I'm finally back on the right track. Yes, I realize I've said that before, but this time I mean it. Seriously. So hopefully, the next time you read a post titled "Book Two Update," I'll feel less like this: 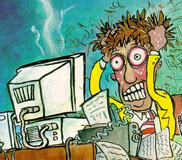 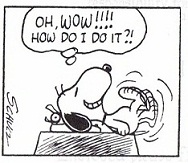