A couple of days ago, I decided to take a short break from the constant brain-melting grind joyous process of revising Book Two and look all the way back at the very origins of what eventually turned out to be The Spectraland Saga. It was such a fun trip through time that I decided to come back, load you all up on my TARDIS, and take you along for the ride. 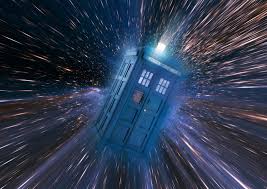 The earliest documentation I have about my developmental thought process is an email that I sent to myself on Monday, April 19, 2010. Some of the more interesting notes that I wrote included:

Young teen (14-15) musician (working name: Joel), bullied at school, having a hard time getting a band together and meeting girls, etc.
Idolizes an obscure indie rocker (working name: Marshall)
The parallel world is the Island Nation of Somewhere (working name, obviously)
Maybe there's a crystal that "stores" songs - like a wizardy iPod

As readers of Book One know, the names Joel and Marshall did make it to the final story, while "Island Nation of Somewhere" eventually became Spectraland. Joel got a little older (16), while Marshall got a little more famous (Biledriver became a successful multi-platinum band as opposed to remaining an obscure indie group). And, of course, the so-called "wizardy iPod" evolved into the Songshell.

Over the course of the following month or so, I started to come up with ideas for other characters, themes, and the overall plot of the book. I even wrote some snippets of trial dialogue, some of which are completely hilarious in retrospect:

The mayor had a grim expression on his face. "We will need to organize camping supplies. Even on our fastest steeds, it could take days, even weeks, to make it all the way up to the Dragon's Cave."

"Wait, wait, what? Weeks?" Joel snapped. "So I guess you guys don't have cars or planes or anything like that."

The mayor furrowed his brows at Joel. "What are these things you speak of?"

Joel decided it wasn't worth explaining. "Or what about flying horses, or magic carpets, or something like that? Thestrals, like in Harry Potter? Come on...this is, like, a magic land or whatever - you have to have something that flies."

The mayor pondered Joel with a quizzical look. "You certainly are a strange one, young Jo-el."

Now that's Nebula award material right there! But from this, you can see that the whole "nothing in Spectraland can fly" idea was there from the very beginning.

And you all remember Mitch, the bully who was only mentioned, but not seen, in Chapter One? Well, he originally had a much bigger role. Check out this deleted scene, after the jump!


"Hey."
Joel recognized that voice. He didn't turn around.
"Hey!" it said again, louder this time.
Joel thrust his hands deeper into his jacket pockets and walked a little faster.
"Hey, nerd-boy!" the voice shouted. "Where you going? I wanna talk to you."
Joel rolled his eyes and came to a stop. He still didn't turn around. "What is it, Mitch," he sighed.
Mitch grabbed Joel by the shoulder and spun him around so that they were face-to-face. Mitch wasn't much taller than Joel, but probably outweighed him by a good forty pounds - all muscle.
"Man, nerd-boy, you are one skinny twig. I could snap you in half with two fingers."
Joel didn't say anything.
Mitch moved a few inches closer to Joel. "Hey, so I heard you were checking out my girlfriend today."
"I wasn't checking out your girlfriend," Joel said as flatly as he could.
"Don't lie, nerd-boy. Tim and Scott told me all about it. Said you were staring at her for like, ten minutes straight."
Joel started to shake a little, more out of anger than fear. "I was not," he said, steadying himself. "Did you trying asking her? I think she would've noticed if I was staring at her that long."
"Hey, don't talk back to me!" Mitch said, hitting Joel on the chest with an open palm. "You want me to beat your face in right now?"
Joel glanced around the parking lot. School had ended about an hour ago, and the kids who usually played basketball in the nearby court weren't there today. If Mitch did beat his face in, there would be no witnesses.
"I wasn't checking out your girlfriend," Joel repeated as he started to walk around Mitch.
Mitch moved his bulky frame into Joel's way and got even closer. He smelled like Axe body wash and french fries.
"Hey, did I say you could leave? Punk. That's it, you're dead meat."
Joel's blood was boiling now as he quickly considered his options. Run? Fight back? Now how did that block-punch combo thing go again? Wish I hadn't quit karate lessons after three days...
Before Joel could make a move, Mitch shoved him with both hands, knocking him to the ground. "What a wimp," Mitch sneered. "Stupid nerd-boy."
Joel's heart raced. His hands were visibly shaking now as he scrambled to get to his feet. He wanted to start throwing wild punches at this creep who had made his freshman year in high school a nightmare, but he knew that it would be pointless.
"Hey," Mitch said, nodding at the black canvas bag slung around Joel's back. "Gimme that."
"What?" Joel started to feel sick. "No, man, c'mon."
"I said, GIVE - ME - THAT!" Mitch lunged for the bag and yanked it off in one motion. He unzipped it, revealing a cream-white Fender Stratocaster.
Joel had a hollow feeling in the pit of his stomach. "Dude, c'mon, you can beat me up or whatever, just give me the guitar back."
"You want it back? Huh? I didn't hear you, nerd-boy," Mitch said, one hand holding the guitar neck, the other hand cupping his ear.
"C'mon man, give it back!" Joel shouted, reaching for the guitar.
Mitch yanked the guitar away and jumped back a couple of feet. "Ok, you want it back? Here."
Mitch swung the guitar against the asphalt ground with both hands, as if chopping an invisible pile of wood. With a sickening crack, it broke apart where the neck met the body, the pieces remaining connected only by the now-loosened guitar strings. Mitch tossed the wreckage at Joel's feet.
"There you go."
Joel just stood there in stunned silence.
"That'll teach you not to look at my girlfriend again," Mitch said. "And hey - next time you won't get off so easily."

Anyway, that's enough nostalgia for this week. There's a lot more where that came from, so maybe we'll do it again sometime....
Posted by Brian Tashima at 8:08 AM