WARNING: this post contains major spoilers for Avengers: Infinity War. If you haven't seen it yet, what are you waiting for?

Scene: Felicity, Fireflower, Joel, and Keeper of the Light are walking out of the theater, having just watched Avengers: Infinity War. 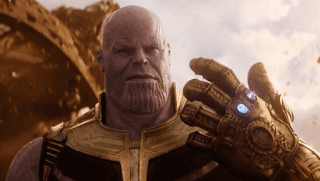 Felicity: Wow. Okay, yeah, that's my new favorite MCU movie. Like, by far.
Fireflower: To be honest, I am still a bit shocked by all of the deaths. Especially Gamora's.
Felicity: You had to have known it was coming, though. You read all the comics.
Fireflower: I know, but you told me before that the people who produce these films often change the events contained within the paper versions of these stories.
Felicity: Don't worry, most of those characters - if not all of them - are going to come back to life.
Fireflower: How do you know this?
Felicity: They already have movies on the future schedule. And the actors are still under contract. So don't get too worked up about it.
Keeper: That is easy for you to say. You are the only one of us who is not dressed up like a character who died.
Felicity: Hey, if anything, Black Widow and the rest of the original Avengers are probably in more trouble than Mantis, Gamora, Spider-Man, or any of those guys.
Keeper: Why do you believe that?
Felicity: They've been around longer, and some of those actors' contracts are done. So in Avengers 4, or whatever they end up calling it, my guess is that the older characters are gonna sacrifice themselves to bring back the newer ones.
Joel: Although they have been talking about maybe doing a Black Widow movie.
Felicity: True. And they'd better. I was more talking about Iron Man and Captain America, anyway.
Keeper: I have a question.
Felicity: Yeah?
Keeper: If the character known as Doctor Strange could see into the future, why did he not inform the other characters of the particular actions they needed to perform in order to ensure the one most favorable outcome?
Felicity: I think it's one of those "if-you-tell-them-about-it-then-it-won't-work" kind of deals. Like, if he said "Hey, Star-Lord, Thanos killed Gamora so you're going to get really mad and then hit him before Stark and Parker get the gauntlet off" then I think that would've messed things up.
Keeper: I see.
Fireflower: Excuse me, but I, too, have a question.
Felicity: You know, you guys can just ask away without prefacing it. We're not in a classroom here.
Fireflower: Very well. Once Thanos collected all six Infinity Stones, thereby becoming more-or-less omnipotent, could he have not simply created enough resources for the entire universe, rather than killing off half of its population?
Felicity: I'll bet you this question is gonna pop up a lot on the Internet over the next few days.
Joel: There are a number of possible explanations for that. One is that the stones are only able to destroy, not create. Another is that Thanos was already committed to that particular course of action before he started collecting the stones, so he didn't want to deviate from it.
Felicity: Or maybe you guys are just thinking about it too much.
Keeper: So what was that symbol on the device at the very end?
Joel: It's for Captain Marvel.
Fireflower: I actually knew that one!
Felicity: Thanks to all the research you've been doing.
Keeper: Who is Captain Marvel?
Joel: She's another character. Probably one of the more powerful ones, depending on how they portray her.
Felicity: She has her own movie lined up for next March.
Keeper: And is she going to be the one who defeats Thanos?
Joel: Probably not by herself.
Felicity: Although she totally could.
Keeper: So if they are going to resurrect most or all of the characters who perished in this film, and a majority of viewers are aware of this, then what was the purpose of killing them off in the first place?
Felicity: To make one completely awesome movie.
Joel: Let's see it again.
Felicity: Good idea. I still have Brian's credit card.