The Lens of Acceptance (a.k.a. the "Dad Story")

Here's an article I wrote for the latest issue of Spectrum Life Magazine. The issue is packed with lots of other great stuff as well, so you should check it out for free at this link! 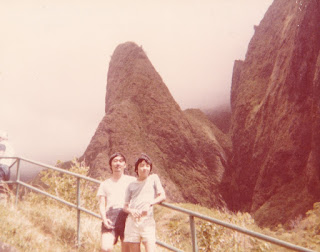 This is a story about my dad.

As I was growing up in Hawaii, we had what you could call a strained relationship. He would often do things that I didn’t quite understand, like stare at strangers in the grocery store or decorate the side of our family car with a bird made from pieces of reflective tape. He would also get very upset about what I thought were relatively minor annoyances, like when he sneezed more than three times or when soda manufacturers changed their cans from pop-tops to stay-tabs (an obvious attempt, he said, to poison the population by making us immerse the aluminum tab into our drinks).

As far as I could tell, he also never really had any friends. There was one gentleman who I suppose my dad considered a friend, as they used to talk on the phone quite a lot. Only—from my perspective, at least—these conversations appeared to be mainly one-sided, as my dad would talk nonstop about all these ideas he had while the other guy patiently listened on the other end.

Everything in our household had to function in a very particular and oftentimes peculiar way. For example, if you took out the garbage, you would have to change all your clothes before you could fully reenter the house because the “garbage fumes” would have “infected” whatever you had been wearing. Also, he hated to admit when he was wrong or had made a mistake, so when something didn’t go according to his (extremely specific) plans, he would blame it on whoever happened to be around, which was usually me or my mother.

All of this led to a fair amount of arguments and strife. Needless to say, I was more than happy to move out of the house when college arrived and I could live at the dorms. I hate to admit that I didn’t mind putting even more physical distance between us when later, as an adult with a family of my own, I left Hawaii for the mainland.

Years passed by and I eventually discovered that my young son was on the autism spectrum. Not having known anything about autism prior to that, I dedicated myself to learning as much as I could about his condition while also getting involved in the local autism community via the Autism Empowerment organization. I would communicate some of this information to my parents back home, especially once I started writing the Joel Suzuki series of young adult fantasy novels and becoming an active advocate not only for my son but for autistic kids everywhere.

Then one day I thought about my dad and said to myself, “Hey…wait a minute.” Because besides the behaviors that I had considered to be quirky, he was also always a very smart and talented person. He could surf, he had a black belt in judo, he could fix cars—all of these things that I couldn’t do. He could also see details that other people usually missed (which is something my son can do as well) and oftentimes perceived events in such a way that it almost seemed like he was predicting the future. On top of that, he was an excellent high school biology teacher who developed a personal philosophy of education that was probably ahead of its time, one in which every student had an equal chance to succeed regardless of their background or level of ability.

So, when I went back to Hawaii one year for a visit, I sat down with him and, in the middle of a conversation about autism, asked, “Do you ever think that maybe you’re, you know…?” And his answer was, “Oh, yeah. I figured it out.” As it turned out, after having read the information I’d been sending back, he’d self-diagnosed as being on the spectrum.

It made a lot of sense. It explained so much. And so after that, with me viewing him through this new lens of acceptance, our relationship improved significantly because now I understood him that much more. I understood his behavior. I understood why we had all those fastidious household rules. I understood his challenges as well as his strengths. I looked at him and saw my son in him, and vice versa. Now, instead of getting upset when he does stuff like call at midnight and leave cryptic messages about my mom’s health failing (she’s fine) and then turning off their phone until the morning not thinking that I would be calling back right away in a panic, I just nod and smile (after confirming that my mom was okay, of course). Now we agree on many subjects that in the past we might have argued about, and some of the things he used to do actually seem rather brilliant in retrospect (the bird on the car was pretty epic).

As an added benefit, this lens of acceptance has also improved how I view other people and the world in general. Whereas before I would have gotten all road-ragey at someone who cut me off in traffic, now I just think, “Okay, maybe it was a mistake.” Or when I hand-carry a misdelivered package to a neighbor who doesn’t say thanks and slams his door in my face, I think, “Okay, maybe he’s just having a bad day.” Because really, most of the time we don’t know what’s going on beneath the surface with other people, right? So I think it’s to one’s own benefit to show some understanding and empathy in cases like these, because not only does it help keep your blood pressure down, it helps make the planet a more positive place. It’s practicing what I like to call active acceptance, where—as opposed to passive acceptance, like when you allow yourself to be taken advantage of—you are making the choice to forgive and embrace others despite whatever differences and disagreements you may have.

I wish we’d had the same amount of autism awareness and acceptance back when I was a kid that we do now. I think it would have made a big difference in my family’s life and in the lives of others as well. Because this isn’t just a story about my dad, it’s a story about everyone.
Posted by Brian Tashima at 6:18 AM