As you may know if you've been following this blog, I watch an incredible amount of anime. But I also watch an incredible amount of non-anime shows as well. Of course, since I'm a writer, it's all in the name of research, homework, and inspiration...and not me simply being a lazy couch potato...okay, well, that may be part of it too. Fine. Anyway, I've recapped a few of the shows I've seen in these previous TV Roundup posts, and now here's the latest batch!
Cobra Kai 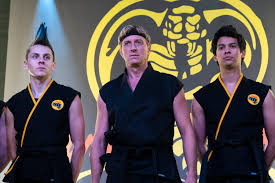 I admit, I resisted watching this one at first, partly because it was on yet another subscription service that I didn't have, and partly because I thought, "it's probably just trying to cash in on cheesy '80s nostalgia." Then I started hearing good things about it. Then it moved to Netflix. Then Onofre Ramiscal of Taking the Lead Media appeared as a guest on my band's podcast and highly recommended it. So then I was like, okay, fine, I'll give the first episode of season one a chance. And boy, am I glad I did. Onofre, you were right. This show is one of those where I say out loud to my TV several times an episode "this is so good!" Sure, it references the original films and packs in the Easter Eggs for those of us who are fans of them, but you don't even have to be familiar with them to enjoy this show. It's fast-paced, balances drama and comedy with expert precision, and plays the "nobody is actually the good guy, we're all just flawed human beings" card to maximum effect. And the scenery is sooo Los Angeles (despite most of the show being filmed in Atlanta)! If you haven't already, do yourself a favor and watch Cobra Kai immediately. I can't wait for Season 3 in January.
(on Netflix)
Tokyo Girl 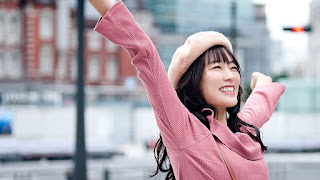 I had heard that this one was sort of like Aggretsuko minus the death metal karaoke, which provoked a mixed reaction from me - I mean, I love Aggretsuko (still my second-all-time-favorite anime), but without the rage-screaming, how fun could it possibly be? Answer: lots. A made-in-Japan dramedy, it follows the life of a woman from age 23 to 40ish as she navigates the choppy waters of work, relationships, and all sorts of existential first-world angst. Once I got used to the numerous fourth-wall breakage narrations (which are delightfully Japanese in nature, by the way), the jarring time jumps, and an initial teenage version of the main character who looks nothing like the older version you see throughout the rest of the show, I was hooked.
(on Amazon Prime)
Blood of Zeus 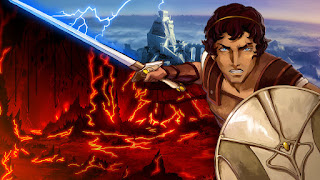 I loved Greek mythology as a kid, and the Percy Jackson novels as an adult, so I should've been all over this one right away, but for some reason it languished in my queue for a while until the bass player from my band recommended it. So then I watched it and was like, okay, yeah, I should've started on this earlier. Netflix calls it an "anime" but I'm including it here in TV Roundup as opposed to an Anime Roundup post because I'm one of those annoying purists who consider "anime" to be, by definition, an animated show produced in Japan. How about we call it "anime-style"? You know, like how I call the Glorified comic book series "manga-style"? Anyway, it has a cool retro animation look that I envision could be used for a possible Glorified anime - I mean, anime-style - show, and it is oh-so-gory. It also employs the "nobody is actually the good guy, we're all just flawed human beings (and superpowered godlike beings)" trope, which I always enjoy. You can hear me talk more about it with the guys in my band in episode 59 of our aforementioned podcast.
(on Netflix)
Dash & Lily 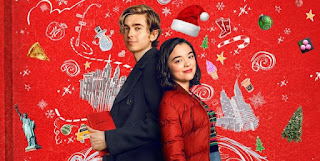 Okay, as a writer of young adult fiction, I watched this one - which is based on a popular YA novel - purely for research purposes. So, when you analyze the - oh, who am I kidding. I'm a sucker for light and fluffy rom-coms, especially when the leads are introverted bookworms whose courtship takes place not in person but via anonymous written messages in a notebook that they pass back and forth...which I guess makes it, instead of a Death Note, a...Love Note? Sorry, couldn't resist. Anyway, I binged this thing in less time than the male lead's namesake from The Incredibles would take to run a 100-meter, um, dash. Sorry again. ANYWAY...
(on Netflix)
Kim's Convenience 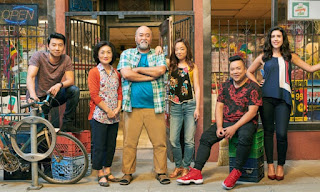 I actually watched all four seasons of this show a while ago, but I love it so much that I just had to include it in this roundup (which is saying something, because there have been a lot of other shows that I've really enjoyed that have never been mentioned in this blog for space and timing reasons). About a Korean-Canadian family who runs a convenience store in Toronto, it's sharp, witty, and laugh-out-loud funny. And it's been renewed for two more seasons, hooray! Oh, and for fans of The Mandalorian - Captain Carson Teva from the second episode of season two is the family patriarch in this show. And for Marvel fans, his son is going to be Shang-Chi in the upcoming MCU film Shang-Chi and the Legend of the Ten Rings. Anyway, I'm going to plug my band's podcast one more time and say that you can hear us talk about Kim's Convenience in episode 42. Okay, see you!
(on Netflix)
Posted by Brian Tashima at 6:16 AM