Now that we've reached the halfway point in the current Major League Baseball season (which, hilariously, is twenty-one games longer than the entire 2020 season), I thought we'd check in with our in-house baseball experts/die-hard Seattle Mariners fans April Hayashi and Lydia Sanchez. 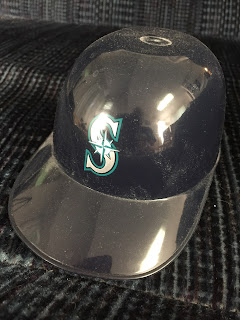 Brian: Welcome back.
April: Thank you.
Lydia: It feels like we were just here.
Brian: Actually, it's been over three-and-a-half months.
Lydia: Huh. How about that.
Brian: So, anyway, we'll start off with the state of MLB in general. Your preseason World Series favorites, the Dodgers, don't seem to be doing as well as predicted.
April: They've been better lately, though.
Brian: True. It seems weird that the team they're chasing isn't the Padres, but the Giants.
Lydia: There's a lot of season left. Things can still happen.
Brian: So are you both going to stick with your prediction?
April: I am.
Lydia: Sure, why not.
Brian: Okay, moving on. What are your thoughts on the whole umpires-checking-for-foreign-substances thing?
Lydia: It's dumb.
April: I agree.
Lydia: Wow - April Hayashi, voicing an opinion!
April: What are you talking about? I'm always voicing opinions.
Lydia: In private. When you're drunk.
April: Hmm.
Lydia: Anyway, and of course, it had to be a Mariner who was the first one to get ejected.
April: Of course.
Brian: I guess that brings us to the Mariners. It's been a strange season for them so far, don't you think?
Lydia: Oh, totally.
April: At one point, I was convinced that there really is a curse on the team.
Brian: You mean, still is.
April: Huh?
Brian: You know, that whole story about how you and Lydia discovered the source of the curse and then got it removed, or at least you thought you did...
April: No idea what you're talking about. Lyd?
Lydia (shrugs): Doesn't sound familiar to me.
Brian: But...you guys have talked about it before. It's all in that script I wrote. Remember?
April & Lydia: (silence)
Brian: All right, anyway, yeah, things were looking pretty rough there for a while. But then they've started to turn it around as of late.
Lydia: But again, there's still a lot of season left. Plenty of time for more stuff to go south.
Brian: Sounds like you're pretty pessimistic.
April: What happened to the Lydia who was predicting a division title?
Lydia: She's retired. Remember how I said "the bullpen looks better, the Big Maple is back, and we have the reigning Rookie of the Year?" Well, then those last two guys go out and get injured and are out for the season.
April: At least the bullpen is sort of better.
Lydia: Meh. And then I also said that Jarred Kelenic would be Rookie of the Year. Yeah, that didn't quite turn out the way I was hoping. So, I'm through with predictions. And optimism.
April: But you also said that J.P. Crawford would be an All-Star, and he's looking like he has a chance. And other guys have stepped it up, like Kikuchi, and Flexen, and Jake Fraley. And it looks like Logan Gilbert just might stick.
Lydia: I guess.
April: That's my line.
Brian: April, it looks like your prediction for the M's of a third-place finish with a record just over .500 is tracking so far. Are you going to stick to that?
April: Yup.
Brian: Lydia?
Lydia: I told you, I'm done with predictions. For real, this time.
Brian: Fair enough. Okay, well, thanks again for coming in today. Before you go, I just want to point out that this is post number five hundred for this blog!
[cheers and confetti]
April: Who's that cheering?
Lydia: And where's the confetti coming from?
Brian: Yup, we here at the Brian Tashima Blog have now been doing this for five hundred straight weeks now. Or, well, actually a little less, because at one point we did a bunch of posts in a row, but it's close enough. So, thanks for helping us mark this special occasion!
April: Is there cake?
Lydia: And beer?
Brian: Uh, no.
Posted by Brian Tashima at 6:06 AM