Had a great time this past Saturday at Rock For Autism, a benefit concert/silent auction for the Children's Occupational Therapy Charitable Trust. One of my bands (*shameless self-promotion alert*), Second Player Score, hit the stage around 12:30, and my guitar hit the stage, literally, around 1pm. I've just got to get that strap lock fixed once and for all. Anyway, after years of constant abuse, my poor Les Paul finally decided that it had had enough and chose not to stay in tune after that. Fortunately, we had only one more song to go, our wonderfully punkish cover of The Police's Synchronicity II, made even punkier by the fact that I played the entire thing in some sort of strange F-A#-C#-A-C-D tuning. 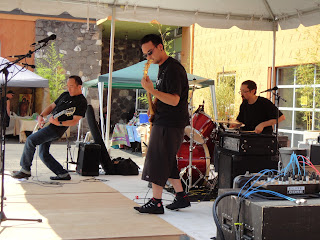 So many people to thank: Lisa from PDX Pediatrics; the other acts that shared the stage with us (Ramble On; Butterfly Breakdown; The Lucy Hammond Band; Ethan - awesome voice, dude; and the great solo singer/guitarist whose name I missed because I was running around like crazy); all the people that bought my book and/or bid on it at the silent auction; my booth neighbors Duncan Saffir from Goddesses At Play and Courtney Freitag from Spectrums Magazine; and, of course, everyone that came out to see us play and support a great cause at the same time. You guys rock.
Posted by Brian Tashima at 2:29 PM