People often ask me, "How long did it take to write your book?" (They are, of course, referring to Secret of the Songshell, since that's the only book I've written so far. I'm working on the second one in the series now. Really. I am. Seriously.) 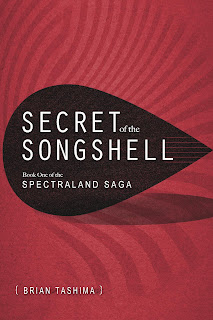 The short answer to that question is "four months." That's how long it took me to write the first draft. However, I spent around a year prior to that developing the idea, working on an outline (or two, or three) and writing an initial 40 pages that ended up in the recycle bin. After the first draft was done, I then spent another year+ rewriting, editing, and formatting.

So in all, SotS was more like 2.5 years in the making. That's crazy when I think about it. I'm sure that Book Two won't take that long. I'm sure! I will keep telling myself that!

When writing the first draft of SotS, I set a goal of 400 words a day, no matter what. Even if it was 400 words of incomprehensible garbage. Even if it was just typing "Joel Joel Joel" over and over again until I got to 400. The main thing was to get the words out, and then fix them later on if need be (no wonder I spent over a year rewriting.)

That was the beauty of working from an outline - as long as I had a vague idea of where the story was supposed to go, then I could at least stumble my way from Point A to Point B on the days (or late nights) when I really didn't feel like writing. It was like:

Me (thinking to myself): Okay, the outline says that Joel, Felicity, Marshall and Greenseed are supposed to ride along the Coast of Fang on their way to the Caves of Wrath. All right, here we go. Ummm

Me (typing): "Joel and the others rode along the Coast of Fang, on their way to the Caves of Wrath."

Me (thinking to myself): Woohoo! That's, uh, fifteen...sixteen...seventeen...eighteen words! Just 382 more to go! I will take a short break now to drink a beer and watch Mariners baseball.

(For those of you who haven't bought the book yet, please note: I AM BEING FACETIOUS. Really. I am. Seriously. Did I mention I spent over a year doing rewrites?)

So anyway, that was my writing process for SotS. It worked pretty well for me because I'm one of those kinds of people who, if I don't meet some arbitrary self-imposed goal, I beat myself up and feel like crap for hours afterwards. If you're like that too, and you want to write a book, I would definitely recommend this approach. Start now! Go!
Posted by Brian Tashima at 10:44 AM