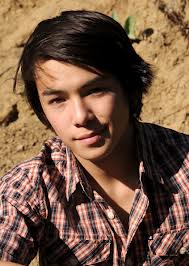 I watch a lot of Nickelodeon with my kids, and one of my - um, I mean, our - favorite series is Supah Ninjas. It started airing just as I was completing the first draft of SotS, and I thought: hey, that guy would make a good Joel.

I actually didn't have a concrete image of Felicity for quite some time, even after the book came out. I was sort of thinking Taylor Swift, but she's a bit on the tall side. Then a few months ago, one of my friends suggested Chloe Moretz, and I was like, perfect! Apparently, Hollywood is following my every move, because I discovered last week that Chloe was being considered for the lead role in the upcoming new Star Wars movie.

Okay, I know that this is a pretty obvious choice for a British rock star (yes, I've seen Forgetting Sarah Marshall and Get Him to the Greek), but Marshall was the one character for whom I had a pretty definite image in my head the entire time I was writing SotS. Russell Brand just captured all of the elements that I wanted Marshall to have.

Well, not quite like this, but you get the idea.
Posted by Brian Tashima at 8:58 AM