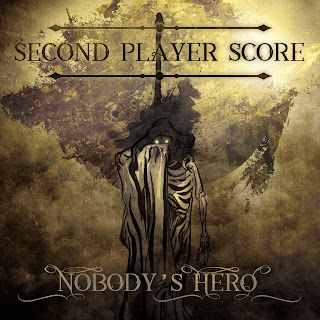 It contains eleven brand new tracks and is available on CDBaby, Amazon, iTunes, or direct from our website if you want an autographed physical copy!

As I may have mentioned before, it's a quasi-concept album that tells the story of...ah, well, why don't I just let our esteemed biographer (who goes by the name of "Suzi" and doubles as my blog editor) tell you all about it! Take it away, Suze...

Thanks Brian! Well, prior to a show that Second Player Score played at a bar in downtown Vancouver, Washington, the bar’s manager — possibly influenced by “Chosen One,” a song off of SPS’s debut album, Fortress Storm Attack — was asked by a patron to characterize the band’s sound. His reply? “Like if Bad Religion wrote songs about video games.” Would that be an accurate description?

“It could be,” Brian Tashima, guitarist/vocalist, says with a chuckle. “But I think it goes a little deeper than that. We don’t actually have songs — besides “Chosen One,” of course — that contain specific references to video games per se, but pop culture as a whole is where a lot of our inspiration comes from, so I guess that description kind of captures the spirit of who we are as people in general.”

Indeed, most of the material on Fortress Storm Attack and the band’s newly-released sophomore album, Nobody’s Hero, does not so much reflect a direct relationship to the topics adored by Comic-Con attendees (of which the band members proudly count themselves as being among) as they do a certain vibe and sensibility that can only come from people who have been steeped in that particular scene since childhood.

For example, while it never explicitly says so, the cover art of Fortress Storm Attack is a direct tribute to the “All your base are belong to us” Internet meme that grew out the 1989 video game Zero Wing. And now, with Nobody’s Hero, the band returns with a quasi-concept album that tells the Dungeons & Dragons-esque story of a man, granted magical powers by an evil spirit, who ends up destroying the world.

“Basically, this guy gets seduced by a female demon who gives him these special abilities, and initially, he tries to help people with them, but then he eventually succumbs to the temptation of using them for selfish and corrupt purposes,” Tashima explains. “Having done that, he becomes worthy of being her consort and siring her child — a daughter who will grow up to continue the cycle. The demon then betrays and abandons him, leaving him for dead. He survives, though, and uses what’s left of his powers to stop her in the only way possible, which is to cause an apocalypse that wipes everyone out, including them. It’s like a Greek tragedy.”

Sounds fun. How did the band come up with such a story?

“It actually sort of wrote itself,” drummer/vocalist Kyle Gilbert says. “We didn’t set out to make a concept album, but as we were developing the songs, the story just appeared. That’s how we tend to do things, for the most part — we don’t plan it, we just go with the flow and take things as they come to us, whatever happens naturally, whatever feels right.”

“We try to plan, but that usually never works out,” bassist/vocalist Daniel Downs adds with a laugh.

The eleven songs on Nobody’s Hero reflect a darker, heavier sound that still manages to retain the anthemic hooks and vocal harmonies that have become the band’s signature. From the crunching riffs and beer bottle-slide solos of the opening track, “Bonestorm,” to the ska-like verses that give way to an epic instrumental finish in the closer, “Comets,” this album showcases the growth of a band that counts not only artists like Bad Religion and Green Day among its influences, but all of geek culture itself.
Posted by Brian Tashima at 6:32 AM