Autism And Disability In Literature

This article has just appeared in the Summer 2018 issue of Spectrum Life Magazine. 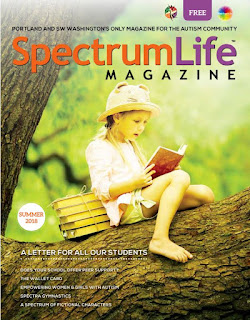 Author, musician, and Autism Empowerment board member Brian Tashima recently had the good fortune to attend a writer’s conference in sunny Florida, where he was not only an attendee, but also a panelist speaking about a very important subject. Spectrum Life Magazine sat down with him to find out more.

You recently left the Northwest! What was the purpose of your travel?

This past March 7th-10th, 2018, I went to Tampa, Florida to attend the 18th annual Association of Writers and Writing Programs (AWP)conference. I had been invited to participate in a panel on disability in children’s literature.

How many people attended the conference?

Wow, that's a pretty large conference. Why does it attract so many people?

AWP is an organization of writers, teachers, students, and other professionals in the literary community. The conference, which is now the largest of its kind in North America, brings its members together for four days of panels, presentations, and networking. It was really energizing and inspirational. I met a lot of great people and had a fantastic time.

That's terrific. Please tell us more about the panel you were on.

It was called “Disability in Children’s Literature: Not an Anomaly, an Imperative.” The official description went as follows: “Children and young adult readers deserve realistic characters reflective of themselves and the people around them. Yet, too often, kids with physical or intellectual disabilities are absent from literature for young readers—or, if present, the disability is the focus of the book. We’ll discuss how authors can responsibly integrate characters with varying abilities into their work so that the disability isn’t the story, but merely a challenge that a particular character faces within the narrative.”

Great topic choice and certainly an important one for our community! Do you know the process for how this panel topic was chosen?

Melissa Hart, the author of several great books including Avenging the Owl, had submitted a proposal for the panel to AWP. Avenging the Owl features a character with Down syndrome, so Melissa is quite familiar with the topic. I heard that less than half of all proposals get accepted, so she did a great job in presenting it for consideration—she wrote the description I gave you in the previous answer. And besides, I think that it’s an important topic that needs to be discussed, especially given the current cultural climate.

Who was on the panel with you?

Melissa was unable to attend, but I was joined by Naseem Jamnia and Rachel DeWoskin. Naseem is a nonbinary Muslim writer who is working toward their MFA and has written articles for numerous publications. Rachel is the author of Blind, a story about a girl who loses her eyesight in a terrible accident, and Big Girl Small, about a teenage little person who wants to be Judy Garland.

What kind of questions did you answer? Was it moderated or did the questions come from the audience?

Melissa and Naseem had come up with a great list of questions beforehand, and the panel—moderated by Naseem—took turns asking each other the questions and providing their individual answers. Afterwards, we opened it up to the audience. Most of the questions revolved around how to write characters with disabilities in a realistic and responsible manner. A couple of the questions were about Autism Empowerment, which I was more than happy to talk about!

Did anyone on the panel identify with a disability? If so, what type?

No one had a disability that I was aware of, but I think that's okay. To paraphrase one of Rachel’s answers, writing—and reading—is about putting yourself in someone else’s shoes, trying to experience life and the world from their perspective.

What steps can authors take to make sure that their writing is respectful to people and not ableist?

First of all, do your research. If you yourself do not have the particular disability that you plan on writing about, reach out to people who do. Immerse yourself in their lives. Find out what they think, how they feel, what their challenges and their accomplishments are. In my case, my son is on the spectrum and I’ve been active in the autism community for many years, dating back to before the time I even starting writing my series. Rachel spent a year studying Braille and hanging out with blind teens at their school. She also became involved with Little People of America, a nonprofit organization that provides support to people of short stature and their families.

Employing sensitivity readers is also a good idea. Sensitivity readers are people who will read drafts of your manuscript and provide you with specific feedback regarding how your disabled characters are being presented. In one of their articles, Naseem had said that “sensitivity readers aren’t for the writer, but for the readers of an essay or a book.” I think they had a great point, as the final reader of any piece of writing is ultimately the person who will be the most affected by it. Using a sensitivity reader beforehand can help ensure that your book’s audience will have a positive experience.

I love the idea of sensitivity readers and think that is a strategy that would work well for both fiction and nonfiction. Do you get a sense that most writers who feature characters with disabilities in their books were influenced in real-life by someone with that disability?

I believe so. Most writers I’ve met that feature disabled characters are either disabled themselves or have a close friend or family member who is. Melissa’s brother has Down syndrome. Naseem, who is working on a manuscript featuring an autistic character, has a brother on the spectrum. Rachel was originally influenced by The Black Book of Colors, a children’s book that contains images you feel rather than see, but as I mentioned, she proceeded to deeply engage with the blind community and, I’m sure, gained a lot of inspiration from the real-life people that she met.

What do you think is the future of disability in literature?

That’s a great question. My hope is that the portrayal of disabilities in literature continues to expand and improve, and that writers of all abilities feel encouraged and inspired to share their own stories and experiences in a positive, respectful manner. As I mentioned in a previous Spectrums Life article about fictional autistic characters, I feel that representation is very important—especially for kids, who are looking to see themselves in the books that they read. I think that even imperfect portrayals—and, granted, there are a few of those—are a step in the right direction, because at least they invite discussion, which, hopefully, will lead to continued progress.

Thank you for sharing your experience! All of us at Autism Empowerment and Spectrum Life are glad that you were able to represent our organization and the autism community at such a prestigious event.

My pleasure! It was a terrific honor to be on the panel. I’d like to thank Melissa for inviting me to be part of it, and Naseem and Rachel for being such incredible panel-mates. I hope I get a chance to do something similar again in the near future.
Posted by Brian Tashima at 6:39 AM