This is the final week of the countdown, because next week Joel Suzuki, Volume Four: Fable of the Fatewave will be officially launched into the world! 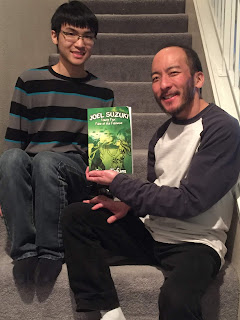 Since today is Thanksgiving, I want to take a moment to thank everyone who had a hand in bringing Joel and Felicity's latest adventure to life: Karen and John Krejcha of Autism Empowerment, Susan DeFreitas of Indigo Editing, Jill Colbert of Manfish Inc., all the members of the Wavemaker Order, my fellow authors in SCBWI and NIWA, and everyone else who has read and supported the Joel Suzuki series over the years. Oh, and course, my two awesome kids, without whom these books never would have existed in the first place. Gracias. Merci. Mahalo. Arigatou Gozaimashita. Thank you.

And now, the video of the week! This is Part 5 - the final part - of The Insider's Scoop, a series of short documentary-style films directed by the talented and brilliant Imani Chapin. In this installment, I travel one year back in time to when Volume Four was just a first draft and the subtitle had not been officially announced yet. I also talk a little about what happens in the story as well as provide some background info on Joel's special power, The Sight. Enjoy!
In case you're not already familiar with the Joel Suzuki series, you can catch up by visiting the Joel Suzuki website and/or binge-reading the first three volumes: