Note: this post was originally published on November 30, 2017, except then I was talking about Volume Four, so some relevant details have been changed. 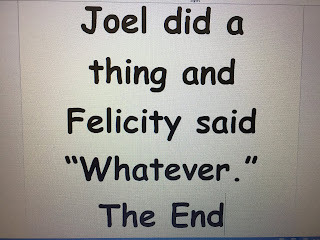 Yup, you heard right. The first draft of Joel Suzuki, Volume Five is officially complete. At the moment it's clocking in at a robust 78,000+ words, which - based on past experience - should grow to be around 81,000 (i.e., about 324 pages) by the time it's finalized. Woohoo!

So right now I'm just going to let it cool off for a little while before I come back to it in a few days. After that I'll do some more revisions and cleanups, and then once I have a "Draft 1-A" prepared (probably in a couple of months or so) I'll send that off to my editor for her to savagely rip apart - um, I mean, offer some gentle feedback after lots of careful and sensitive deliberation (Hi Susan!).

Once that part of the process is complete, I'll settle into full-on rewriting mode, which should take somewhere around 6-8 months. Or maybe less. Or maybe more! Either way, the target launch date for Volume Five is early-to-mid 2020, so I'm still right on schedule.

And what, exactly, is Volume Five about, you ask? Well, let me tell you. Or not! Suffice it to say that most of the action takes place not in Spectraland, but back on good old Earth, and a lot of characters who were just bit players in previous volumes will have much larger roles this time around. To say any more would be a spoiler for anyone who hasn't read Volume Four yet, so I'll stop there.