Continuing with the "food" theme from a few weeks ago, I decided to take a closer look at what kind of meals are eaten in Spectraland. Now, for readers of the Joel Suzuki series, you've probably noticed that the foodstuffs in the "other world" are often described in a less-than-palatable-manner, but that's just because we're looking at them from Joel's point of view, and he's a somewhat picky eater. The reality is that, in most cases, they're more delicious than they would seem. 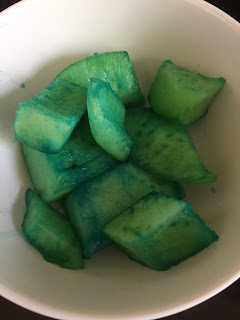 Here's a list of what's been on the table so far, and a little commentary for each:

Volume One, Secret of the Songshell

1. Plumeria Juice: the first thing that Joel was served in Spectraland, this drink is described as being of a "sickly green color" and smelling "like plumeria flowers." He didn't try it, but if he did, he would have found that it was actually quite good, as it tastes something akin to orange juice.

2. Unidentified Brown Soup: described as a "murky brown fluid," Joel didn't eat it, but if he did, he would have found that it tasted similar to miso soup, which is actually something that he likes.

3. Fuzzy Roast Beef: Joel actually did try this, and it was okay! See, Joel, you just need to be a little more adventurous.

4. Lifepods: the staple food of Spectraland, a lifepod is a small, round blue fruit that tastes like banana and watermelon, with a slight minty aftertaste. Everyone, especially Felicity, consumes a lot of it over the course of this and subsequent volumes.  I've even attempted to replicate it here on Earth, with varying degrees of success.

Volume Two: Mystery of the Moonfire

1. Stripeclaw Steak: this was seen being eaten by Chief Raintree in the form of a "big green bone that was shaped like the capital letter A." Made from an animal called, naturally, a stripeclaw, it looks odd but tastes like a cross between beef and pork.

2. Spiral Landing Stew: described as a "black liquid that smelled like old milk" that contained "various pieces of unidentifiable solids (that) bobbled up and down in it like little buoys," this dish is actually...well, yeah, all right, this one is an acquired taste, even for Spectraland natives.

3. Burnt Leg of Bullrat in Sunseed Sauce: this wasn't actually seen or eaten in the story, but the recipe for it was mentioned by Chief Sandthroat. Basically, it tastes like sesame chicken.

Volume Three: Legend of the Loudstone

1. Cloudrunner Six with Extra Crystal: a jet-black alcoholic beverage in the Mono Realm/Six States Beneath the Shroud, which is where most of the action in Volume Three takes place (rather than in Spectraland). Joel, being underage, doesn't try it.

2. Thin Wafers: crispy and tasting like a sugar cookie, this is one of the few things in the other world that Joel actually eats and enjoys.

Volume Four: Fable of the Fatewave

1. Lifepod Cake: invented by Felicity, this is made from lifepods (see above) and flour created by grinding up the cattails from the Groaning Geyser.

2. Rat Skewers: okay, I admit, these don't sound very appetizing ("small rat-like animals that had been burnt, skewered, and drizzled in a thin red sauce that may or may not have been blood"), but they're really not all that bad...if your name is Andrew Zimmern or Bear Grylls. Just kidding. Mostly.

3. Lifepod Wine: another lifepod-based creation, this is an alcoholic drink that was actually replicated here on Earth for the Volume One relaunch party back in 2013.

And there you have it! So, if you're ever lucky enough to find yourself in Spectraland or the surrounding areas during your lifetime, don't let Joel and Felicity's experiences deter you from trying the food. You might just discover a new and surprisingly tasty culinary experience.
Posted by Brian Tashima at 7:26 AM