With Halloween just around the corner, I thought it would be fun to share my recipe for an alternative kind of treat that you might want to consider handing out in lieu of candy this year: lifepods. 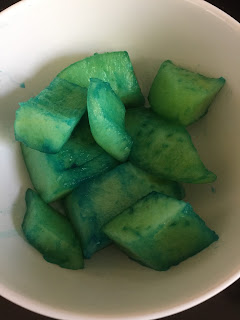 As readers of the Joel Suzuki series know, lifepods are a type of fruit that is indigenous to Spectraland. Introduced in chapter five of Volume One, it's described as "a small, round blue fruit...[that has] a chewy texture and taste[s] like banana and watermelon, with a very slight minty aftertaste." Sounds delicious, right? It's also very filling - after one lifepod, you won't have to eat for the rest of the day. Felicity, in particular, seems rather fond of them.

Lifepods don't grow on Earth, and for whatever reason, Felicity and Joel have been unsuccessful at bringing one or more of them back here from Spectraland (I suspect that they eat them all before they're able to make the trip, but who knows). So, a while back I decided to use Earth-based ingredients in an effort to replicate a lifepod as closely as possible. My initial efforts were met with some skepticism, but over time I've tweaked the recipe until I arrived at what I feel is the ideal formula:

Directions
1. Using the flat side of a spoon or similar utensil, crush the watermelon cubes, extracting as much of the juice as possible. I've tried other watermelon juice substitutes, but the real thing provides the most accurate flavor.

2. Place the honeydew melons in the Tupperware (or similar) container. The reasons I use honeydew as the base fruit rather than the watermelon itself are that it has the right texture, and it can take on the blue coloring easily (see step #5 below).

3. Add the watermelon juice to the honeydew melons. Be sure no seeds or watermelon pieces slip through.

4. Add 2 tablespoons of banana flavoring to the mixture. You can get banana flavoring from the spice department at your local grocery store - the same place where you would find the food coloring and the mint extract.

5. Add 6-7 drops of blue food coloring, sprinkling them over the melon cubes.

6. Add one drop of mint extract to the mixture. Trust me, this will be enough.

7. Close the container and shake up the mixture for 20-30 seconds or until the blue coloring has been spread out evenly to all the melon cubes.

8. Drain the liquid and transfer the cubes to a new container or dish.

Felicity and Joel will now provide their testimonies as to just how close this comes to the real deal.

F: Ugh. Are you doing this lifepod recipe thing again?
B: Yup. For Halloween.
F: Well, it's certainly scary, all right.
B: Just try it and tell the readers what you think.
J: Um, will it be any better than last time?
B: Now I'm using real watermelon juice and I substituted mint extract for the mint sprinkles, so yeah.
J: I dunno...
B: Just try it. Please.
(Joel and Felicity take small, tentative bites. After chewing for a few seconds, Felicity grimaces and Joel wrinkles his nose.)
J: I guess it's...all right?
F: (to Joel) You're so polite. (to Brian) Dude. This tastes nothing like a real lifepod.
B: What? What are you talking about? Of course it does.
J: Well, it does have banana, watermelon, and mint flavors in it, but...how should I put this...it tastes...what are the words I'm looking for...
F (spitting out her bite): Terrible. Horrible. Awful.
J: I was going to say "not quite right," but those work too.
B: Aw man, are you serious? I thought I really had it this time. I was even going to hand these out on Halloween.
F: Do you want this house to get TP'd? If not, I strongly suggest you reconsider.
J: Let's go pick up some candy.
F: Good idea. I'll drive.
B: Wait! Don't you want to try my recipe for replicated stripeclaw steak?
(Car zooms off)
B: Hmm. Guess not.
Posted by Brian Tashima at 6:15 AM