The 21-and-over nature of last week's post - because of the beer talk - prompted Joel and Felicity to finally sign up for Facebook accounts, mainly so that they could comment on my announcement of said post where I essentially told them that they were too young to read it. Felicity offered up her usual snark ("whatever") while Joel pointed out that technically, they're both over 21 depending on what timeline you used. This caused a bit of confusion in the household known as my brain, so I decided to call the two of them in for a little family meeting. 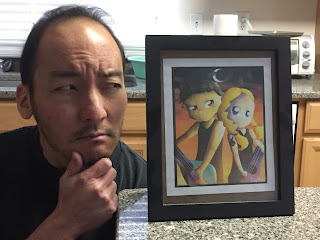 Brian: Thanks for being here today.
Joel: Um, you're welcome.
Felicity: This better be quick. I'm teaching a karate class at four-thirty.
B: All right, so Joel - you said that you and Felicity are more than twenty-one years old?
J: Well, yes. You see, in April of 2012, I was sixteen, while Felicity was eighteen. And since my birthday is July 17, and hers is July 21, then technically, since it's now October of 2017, that would make me twenty-two years old, and her, twenty-four.
B: I guess I understand that logic, but...you're actually now only seventeen, and she's nineteen.
J: I know.
B: You know?
J: Yeah. We're seventeen and nineteen, but we're also twenty-two and twenty-four. Kind of at the same time.
B: Huh? I don't get it.
F: Does it really matter?
B: I'm just trying to understand.
J: It's a timeline issue. This is what happens when you get involved with things like alternate dimensions, multiple realities, quantum mechanics, and so forth. Time moves a lot slower on Earth than it does on Spectraland, relatively speaking. And then when you throw in time travel, it makes it even more complicated.
F (with terrible faux-English accent): "It's more like a big ball of wibbly-wobbly, timey-wimey stuff."
J (with similarly terrible faux-English accent): "Timey-wimey? Do you have to talk like children?"
(Joel and Felicity laugh, exchange high-fives)
B: Okay, as much as I appreciate the Doctor Who references, I'm still not sure I'm getting it.
F (sighing): All right, I really have to run, so I'll try to make this simple for you. You know the comics you like to read, in that thing called a...a...
B: Newspaper?
F: Yeah, that. And you know how the characters in, like, say, "Sally Forth" or "Luann" seem to sort of get older, but really slowly?
B: I guess.
F: C'mon, you know what I'm talking about.
B: Well, yeah, okay, sure. Like how Luann went from being thirteen in 1999 to being eighteen in 2014.
F: Exactly.
B: But those are cartoon characters. You guys are...
F: Are what?
B: People. With actual Facebook accounts.
F (looking at Joel): We are, aren't we?
J (shrugs): I'm pretty sure we are.
B: So are you trying to tell me that two-dimensional cartoon characters have access to time travel?
F: Sure, yeah, why not. Can I go now?
J: I don't think that's really her point. She was just trying to give you an example of how some people can age slower than others.
B: Oh, like how Kyle keeps getting carded when he tries to order a beer.
J: Um...
F: Yeah, no. It's nothing like that at all. Look, can we continue this some other time? My students get really antsy when I'm late. They start breaking all the boards and stuff.
B: All right, fine. Joel, can you stick around?
J (glancing at Felicity): Well...
F: He's coming with me. He has to...iron the black belts.
B: Do people really do that?
F: Of course they do. Later!
J (waving): Bye.
B: Grrr

Will Brian ever learn the secret behind Joel and Felicity's aging process? Will Felicity make it to her karate class before her students start breaking things? Do cartoon characters really have access to time travel? Tune in next week when we present the shocking conclusion to..."You Guys Age Funny"!*