My Japanese-Language Learning Experience, Part One

As you may have guessed from the Japanese words that I occasionally sprinkle into my posts, I've been trying to learn Japanese (then again, I suppose you may have thought that I already knew a lot of Japanese, but whatever). 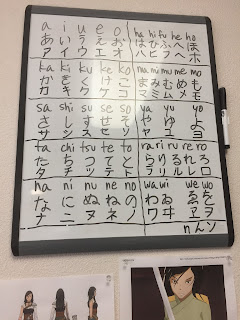 The truth is that I've had opportunities during my lifetime to learn Nihongo (which is how to say "the Japanese language" in Japanese), but I've never really taken full advantage of them. When I was a kid growing up in Hawaii, a lot of my classmates attended "Japanese school," which was basically an after-regular-school program designed to teach kids the language, culture, etc. My parents asked if I wanted to go, but being the rebellious punk that I was, I said no. Actually, I wasn't really a rebellious punk, but I did want to distance myself from my identity, thinking that if I were a Japanese person who couldn't speak Japanese, then that would somehow make me cool and unique. This was the logic of a ten-year-old (bear in mind, five years earlier I had spontaneously volunteered to sing the theme song to a tokusatsu - Japanese superhero - television show, in Japanese, in front of my whole kindergarten class, so, yeah, it's complicated.)

Later, in high school, we had a graduation requirement of two years of foreign language. When considering my options, I ended up deciding on Japanese - not because I had grown out of my resisting-my-heritage phase, mind you, but mostly because I was lazy. You see, despite my best efforts, I still knew more Japanese than any other language besides English, simply by virtue of my prior tokusatsu fandom as well as being surrounded by the local culture in Hawaii, which had long since integrated a lot of Japanese customs. On top of that, I had heard that the teacher was kind of on the lenient side when it came to homework and grading, so Japanese was the natural choice for someone who wanted to spend as little time studying as possible so that he could focus more on practicing heavy metal guitar (a pursuit that proved rather successful) and figuring out how to attract girls (not as much).

In college, after forgetting most of what I had learned in two years of high school Japanese, I suddenly found myself on a study tour of - you guessed it - Japan. We were there for a couple of weeks, and it was an awesome, amazing experience (I was suddenly of legal drinking age, so, yeah). I even ended up getting lost with a classmate somewhere in Hokkaido, only managing to make it back to our hotel by scraping up whatever little of the native language I knew from the deep recesses of my memory banks: "Sumimasen, watashi wa gaijin desu. Nihongo wakarimasen. Sheraton hoteru o doko desu ka?" (Roughly translated as "Excuse me, I'm a foreigner. I don't understand Japanese. Where is the Sheraton hotel?")

Despite all of this, after college and during the years that followed, I still resisted learning Japanese like a picky eater resisting brussels sprouts. I think eventually it just became part of a strange stubborn streak that I have, one that causes me to do certain things that really don't make much sense - like refusing to read Harry Potter novels because they were so popular (of course, we know how that eventually turned out). Even weirder, I actually felt a twisted sense of satisfaction at not knowing Japanese. As an example, during a book event for Joel Suzuki, someone came up to my table and the following exchange ensued:

Person: (looks at book cover) "Suzuki?" (looks at my business card) "Tashima? So, you're Japanese, right?"
Me: "Japanese-American." (extra emphasis on "American")
Person: "Hajimemashite. Nihongo ga hanasemasu ka?"
Me: (smiling, shaking head) "No idea what you're saying."
Person: (disappointed): "Oh." (walks away)
Me: (thinking that I probably just lost a potential sale, but that's okay because I SHOWED THAT PERSON NOT TO MAKE ASSUMPTIONS ABOUT SOMEONE BASED ON THEIR LAST NAME HA!)

Then, in January of last year, I signed up for Netflix, and everything changed.