This is the second, and last, of a two-part blog post. Read part one here.

Signing up for Netflix was a turning point in how I viewed not only the Japanese language, but my own heritage as well. Why? Because of anime. Yup, anime (Japanese animation, for those of you who are new to this blog). Allow me to explain. Prior to my signing up for Netflix, my exposure to anime had been limited mostly to shows like Pokemon and - I'm dating myself here - Ikkyu-San. 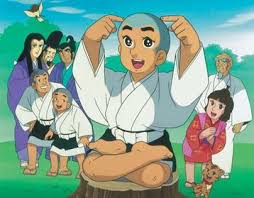 However, my Netflix account opened me up to a whole new world of anime, which apparently had been growing like a uncontrollable forest-beast (no idea what that is) while I wasn't paying attention. There were shows upon shows upon shows, some of which I had heard about peripherally, like Death Note, for example.

So, I decided to give them a try, starting with the aforementioned Death Note. And, well...wow. I was floored. Looking for more, I discovered Aggretsuko, and, with those two shows making up the proverbial one-two punch, my anime fandom had begun. I became hooked. Over time, I added titles like One Punch Man, Sword Art Online, Soul Eater, Bleach, and many more to my list of favorites, and I watched as many episodes as I had available to me.

These shows also exposed me to some awesome Japanese bands, including one - Stereopony - that eventually joined my personal Mount Rushmore of favorite musical artists (the others on the mountain being Metallica, Iron Maiden, Billy Joel, and The Dambuilders).

And so all of this together eventually served to rekindle...well, no, you can't rekindle something that had never really been kindled in the first place, so let's say that it served to ignite in me a newfound interest in Japanese language and culture. I bought some Japanese language books, downloaded some apps (one of which my daughter, who had previously shown an interest in learning Japanese, recommended to me with a look of "well it's about time you jumped on this bandwagon"), watched videos, and even changed the language of my cell phone to Japanese (at one point I panicked because I was getting a text and I couldn't figure out how to change the phone back to English). On a high school band trip for which I served as a chaperone, I even attempted to speak whatever little Japanese I knew to one of the other parent chaperones who is fluent (she was polite enough to humor me).

It was then that I realized: for probably the first time since I was in kindergarten, I was proud of my heritage.

And that brings us to today. I still have a long, long way to go ("mada mada desu"), but it's been a fun and rewarding new journey that I've found myself on. I've even branched out from anime to live-action Japanese dramas ("Switched," "Midnight Diner") and other kinds of shows ("Japanese Style Originator"), all of which I've found both entertaining and educational. Even though my Nihongo skills are about equal to a 2-year-old's at this point, I'm determined to continue the process and hopefully make a return trip to Japan someday soon (where I will try not to get lost this time).

Epilogue: at last month's Willamette Writers Conference, someone came up to my book signing table, saw the names "Suzuki" and "Tashima," and asked if I was Japanese. I gladly said yes. He followed that up with "genki desu ka?" meaning "How are you?" and I happily replied "genki desu," meaning "I'm fine" (I even knew that what we were saying wasn't even totally correct in context since we had never met before!) He still didn't buy a book, though.
Posted by Brian Tashima at 7:07 AM