Hey, I'm back with another edition of Anime Roundup! I know, it's been a while, right? Usually I've been doing these every five or six weeks or so, but this time the last one was over three months ago. The main reason for the gap was My Hero Academia, which, after I talked about it the last time, quickly because my new all-time #1 favorite show (sorry, Food Wars) and was basically all I was watching for a while. But once I got caught up (it's still ongoing in Japan, and new episodes only come out once a week) I was able to turn my attention to other stuff, like:
Black Clover 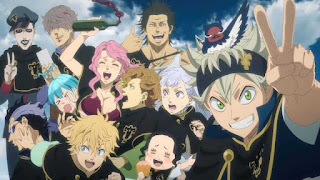 Crunchyroll kept feeding me ads for this one, and I'd heard a lot about it, so I finally decided to give it a shot. And I'm glad I did! I love the premise, which is: in a world where basically everyone has magic, one boy without magic is still determined to become the Wizard King so he can help save the world from demons (and also marry his childhood crush). It's kind of like Piers Anthony's A Spell for Chameleon meets Naruto. I also love the main character's indefatigable spirit and inspiring catchphrase ("Not giving up is my magic!"). It's nice when you discover an anime that you enjoy that is new to you but has a billion episodes already out (actually 170, but close enough) because you know that you'll have something to watch for a long time.
Jujutsu Kaisen 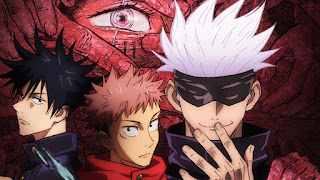 I'd heard that this one was considered the next big thing in manga/anime, being fairly new (the manga started in 2018, the anime in 2020), so I also put it on my post-My Hero Academia list. A fun and watchable mix of a lot of different influences, it's basically about a teenage boy who inadvertently becomes the host of a powerful Curse (like an evil spirit) and then joins a school for something called Jujutsu Sorcerers whose job it is to fight said Curses. You can tell that it sort of follows a Naruto-like template, but it puts its own original spin on it, and the juxtaposition of standard anime-style humor and grotesque horror imagery makes for an interesting contrast.
Don't Toy With Me, Miss Nagatoro! 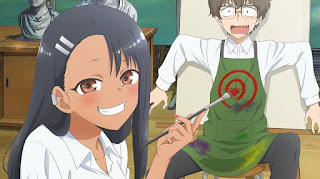 A light and airy rom-com about a high school girl who, um, flirts? I guess you could call it? with a shy and quiet otaku (nerdy) upperclassman, this one is, yes, a little racy and un-PC and definitely not for younger or sensitive audiences, but it never really crosses the line and eventually (spoiler alert? sort of?) showcases a wholesome and touching side with themes about love, friendship, and confidence.
Spirited Away 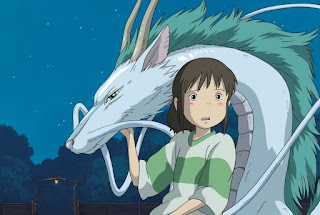 If you're an anime fan, you've probably heard of this Studio Ghibli/Miyazaki classic. On the surface, it's a seemingly simple Alice-In-Wonderland-like tale about a young girl who stumbles into a spirit world and has to find her way out, but there's actually a lot more to it than that, with underlying themes that deal with spiritualism, consumerism, environmentalism, and more. It's deservedly won a boatload of awards (including an Oscar for Best Animated Feature) and was the highest-grossing film in Japanese history for 19 years until it was finally surpassed in 2020 by the Demon Slayer movie that I mentioned in a previous roundup post.
Bananya 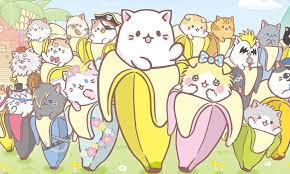 Okay, so "nya" is the Japanese equivalent of "meow." Therefore, "Bananya" is a cute and silly show made up of short (two-to-three minute) episodes that feature cat-banana hybrid creatures living in regular households, sometimes alongside regular cats (how that works, I have no idea). Season one showed them in everyday situations (or, as everyday as life can be for cat-banana hybrid creatures), while season two was a little more origin-story-ish and explained where they came from (another planet, sort of) and had magic and science fiction-y elements and other stuff. Lots of lovable fun for those times when you don't want to think too hard. Also, after every episode when the credits started rolling, I was like, "that was SO Japanese."
Posted by Brian Tashima at 5:39 AM