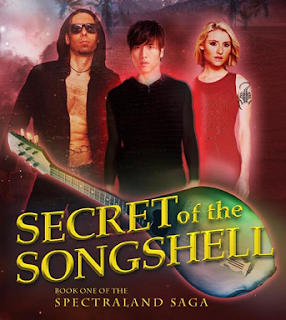 On the fourth day, it started to rain heavily. Even though they were sheltered somewhat by the trees, enough water managed to find its way through that within a few hours, they were all totally soaked. By nightfall, the rain had intensified into a full-blown storm, so they decided to set up camp early.

As it was their turn to keep watch, Joel and Felicity sat under an extension of the shield-tent that functioned as a sort of awning while Marshall slept inside. Greenseed and the slimebacks slept huddled together under a large tree that provided sufficient cover from the rain.

“Yeah,” Felicity agreed. “I like this kind of weather, actually.”

Her statement reminded Joel of something that Marshall had mentioned one night back at Headsmouth, before their ill-fated concert. “Oh — hey, uh, remember that time when Marshall said we were from the same area? And you got all mad after that? Does - does that mean you’re from Seattle?”

“Oh, uh, cool,” Joel said, grateful that he had found something else they had in common and relieved that she was, in fact, not upset about that.

“This rain is kinda different, though,” Felicity said, sticking her hand out and letting the drops fall through her fingers. “It’s warm. And the air is still warm. Not like all those forty degree days back home.”

“I, uh, was born and raised there. We moved to the mainland when I was ten and a half. Well, ten and seven months.”

“Oh, okay — um, by Portland, Oregon. Across the Columbia River.”

“Wow, you’re one of the few people who actually seem to know that,” Felicity said without her usual sarcastic tone.

“Of course you did,” Felicity chuckled.

“Um — do your parents still live in Vancouver?” Joel asked, feeling braver by the minute.

“No, they died in a car accident a few years ago,” Felicity said in an oddly impassionate tone.

Joel didn’t quite know how to respond to that.

“So my sister and I lived with our grandparents until I graduated, then the two of us moved up to Seattle,” Felicity continued. “I know I don’t sound like it hurts, but it still does. Just because I can’t express emotions well doesn’t mean I don’t have them, you know?” (that's one of my favorite lines - ed.)

“What about your parents?” Felicity asked.

“Um, they got divorced. That was kinda why we moved,” Joel replied softly.

Felicity twirled a lock of her hair around her finger. “Sucks, huh.”

Two minutes and twenty seconds passed by with nothing but the sound of the pouring rain. Joel found himself counting the amount of trees surrounding them when suddenly, Felicity spoke up again.

“You know that’s why we’re here, right?” she said as more of a statement than a question. “Why we can do the things we do, with the wavebows and casting and stuff?”

“Well, yeah, but also because of our ‘spectrum disorders,’” Felicity said, making an air quotes motion with her fingers, “or whatever they want to call it. Like it’s some kind of disease that can be cured, or whatever.”

“Yeah, of course. What did you think? I told you I was in those ‘special’ classes, remember?”

“Well, we’re all different, you know,” Felicity said, again reaching out for the rain. “That’s why they call it a spectrum. Some are on one end, some are on the other. Some are in-between. And it can show up in different ways. Haven’t you read up on your own condition?”

Connections were starting to form in Joel’s head. “Um, wait — so that means that Marshall — he’s —”

“He’s like us,” Felicity finished his sentence. “I thought you knew that?”

Joel couldn’t believe that there was some detail about his idol that he wasn’t aware of. “Wow — um, no, I didn’t.”

“That’s mainly why I was such a huge fan,” Felicity explained. “I mean, his songs are great and all, but I felt like if he could make it, then so could I, you know? And then all my problems —”

“Would be solved,” Joel said, making the briefest of direct eye contact with Felicity for the first time.

“Yeah,” she said, quickly looking away. “Anyway, he explained it to me when I first got here. Something about the frequency of our brain waves being different. I guess we —”

“Whoa, um — what’s that?” Joel said, noticing a flash of movement out of the corner of his eye.

“What’s what?” Felicity said, sounding a bit annoyed that Joel had interrupted her story.

(and then it goes right back into an action sequence!)
Posted by Brian Tashima at 3:24 PM