Did you miss me? Felicity really wanted to take a break from filling in for me this week, so I agreed to step back in and take over again for a while. Don't worry, it's cool, I'm still hard at work on the Book Two revisions, and in fact, I'm happy to say that I'm a little ahead of schedule so far. So, I figured I'd give you all an update on what's been going on besides that.

Second Player Score played a couple of great shows this month. On Saturday the 9th, we did Anarchy Radio's 3rd Birthday Party at the Oak Grove Bar and Grill along with our good friends Stab In The Dark and Laurelhurst. Tons of fun, great crowd, and cake! Mmm, cake. 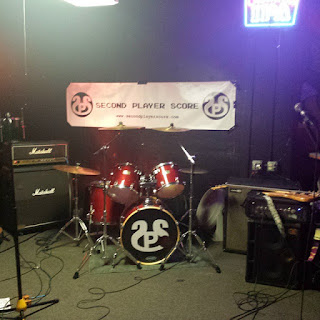 We also played a couple of new songs live for the first time: "Demon's Kiss" and "Origin Story." Both of them will be on our upcoming second album that is due out next year. More on that below!

Then, on Saturday the 16th, we rocked out over at the Adams St. Bar in beautiful downtown Camas. We were joined by our usual showmates Stab In The Dark, along with Kings and Vagabonds and a great band that had just come out of semi-retirement, The Secludes. I'm glad they're playing again, 'cause those guys kick some serious butt. 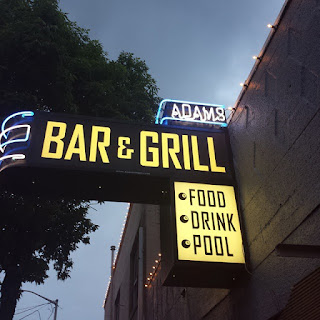 As for our second album, Boot Camp continued in earnest once those shows were done. What is Boot Camp, you say? Go back and refresh your memory by reading this post from a couple of months ago! We have studio time booked for July, and we're planning on recording two songs: "Deep" and "Comets." So, we set up the good ol' 8-track and made a demo of "Deep" this past Saturday.
Then on June 13th, we'll be back at Shanahan's in Vancouver along with Stab In The Dark and another great band, Medium Size Kids, who you should really check out. Seriously, do it now. In fact, here's a link to one of their cool videos. Once you hear them, you're really not gonna want to miss this show. I know I'm looking forward to it. 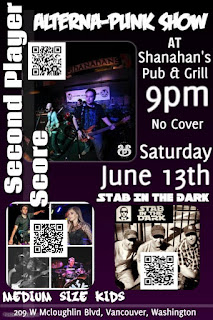 Video game update: there is none! I stopped playing Fire Emblem after I got to the final-final boss because I had basically screwed up along the way and didn't add the right characters or whatever to be able to beat it, so I gave up. After that, I gave Pier Solar and the Great Architects a try, but it hasn't really caught on for me just yet. I might give it another shot, but in the meantime, I'm really just waiting and waiting for an announcement about the new Xenoblade's release date. C'mon, Nintendo, you're killing us here...
Posted by Brian Tashima at 7:32 AM