Re-watched X-Men: Days of Future Past in preparation for the Apocalypse, which is probably occurring this weekend. Whoa, was that a good movie. Like, super way better than the first time I saw it, which was already pretty good. If anyone is planning on seeing the new one (which I have heard is not so hot), I recommend you do this first, because at the very least, you will be seeing a really awesome flick. 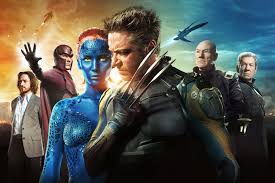 The first-place Seattle Mariners. I will never get tired of saying that. I will keep saying it until it is no longer true. Now if only they could build a winning record at home...

If you're considering getting a cat, get two if you can. It won't be that much more in the way of maintenance, and the allogrooming and the playfights are totally worth it.

Wireless mice: extremely cool (especially if you have cats who like to chew on cords, which are, I think, all cats), but man, do they go through batteries fast. I guess part of that is my fault for not turning them off overnight.

Went to a korean BBQ joint in Portland a week and a half ago. I ate so much that I declared, at the time, that I wouldn't have to eat for several days afterwards. Oddly enough, though, it had the opposite effect; I was actually still hungry after I had my usual suspects for lunch and dinner the following day. Then I realized: isn't that how all those professional eaters train, like, for those 4th of July hot dog eating contests? By eating so much in the days and weeks leading up to it that their stomachs expand? Anyway, this was basically all I could think about for the entire week afterwards.

I am sure there are a lot of people out there in Internet-land who will say "duh" to this, but beating the Chapter 12 boss in Xenoblade Chronicles X is soooooo much easier once you have a superweapon for your Skell. Just saying.

The other day in the car, my son - who was driving, I'm only now getting used to the idea - gave a short polite beep to a motorist in front of him who didn't realize that they had a green arrow. The driver, realizing the error of their ways, made a brief wave of apology before quickly moving along. Several days later, I encountered this exact same situation while driving by myself, so I, too, gave a short polite beep. This particular motorist, however, after looking in their rear-view mirror, decides not only to not go through the green arrow, but to sit there through the entire red light that followed, even though we were turning right and there was no oncoming traffic. Then, when the light finally turned green-green, they slowly inched forward as if they were getting paid by the hour to go wherever it was they were going. Substandard driving skills, or someone trying to be purposefully annoying? You decide.
Posted by Brian Tashima at 7:05 AM