In case you've forgotten, my primary band Second Player Score is hard at work on our sophomore album (does that make the first album a freshman? The third one a junior?) as we prepare it for a planned fall release. What? You have forgotten? All right, here are some reminders. 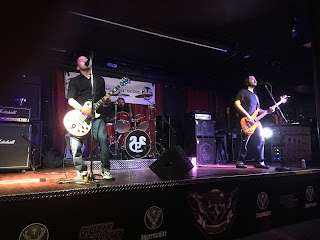 We just got the final mixdowns for the most recent batch of songs ("Origin Story," "Head of Sin," and "Drink the Poison"), so that makes eight in the can, three more to go. We have studio dates lined up for July, and boot camp is in full swing (there are not many times when it isn't, to be honest). The working title of the album was Nobody's Hero, and now it looks as if that's been promoted from "working" to "actual." Of course, we may still change our minds at the last minute, but that's looking less and less likely.

By the way, we released another single! It's called "Demon's Kiss," and you can hear it on our website. You can also own it before the album comes out, simply by signing up for our Superfans e-mail list. It's free and easy to do - just go to this link. Our drummer Kyle also put together a cool little video blurb for it that you can watch on our Facebook page.

We should have another update for you by the end of the summer as to the exact date when the album will be coming out, along with cover art and more details about the album's story - remember, it's a quasi-concept album. So stay tuned!
Posted by Brian Tashima at 6:55 AM