What I Did On My Vacation

You may recall that a few years ago, I went to Spectraland for my summer vacation. This year, I went to a similar location - a little tropical island known as O'ahu - to attend a friend's wedding. 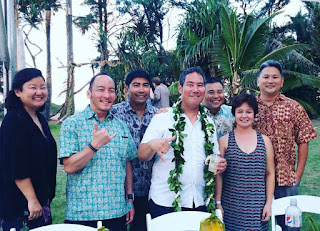 Now, I'm originally from O'ahu, but it had been several years since I went back, so it look a little while for me to get adjusted to the heat and the humidity. I mean, it was hot in the Vancouver/Portland area when I left, but it was a dry heat - the moment I got off the plane in O'ahu I immediately felt like I needed to take shower.

Aside from that, however, it was great to be there, primarily for the three Fs: family, friends, and food. Man, I ate so much. The funny thing is, I don't know if it's being in vacation mode or if it has something to do with the fact that I'm from there, but whenever I go back I find that I can eat mounds of stuff that ordinarily would place me in an instant food coma and then feel totally fine afterwards.
The wedding was on the beach at the North Shore and it was as beautiful as you can imagine. I danced continuously for about an hour even though I can't dance. It was awesome. I also learned how to fly a drone (thank you, video game training) and drive a two-seater with dual manual/automatic transmission. Yup, my rental car was a convertible sports car. I originally signed up for something small and cheap, but when I got there they had run out of those kinds of cars, so the rental agent was like, "well, we have...this. Is that okay?" I didn't cost me extra, so I said sure. It was fun just sitting in the parking lot putting the top up and down. It was like having my own actual Transformer.

The rest of my time there was spent mostly relaxing, checking out a friend's band, catching up with people, and eating. Did I mention eating? 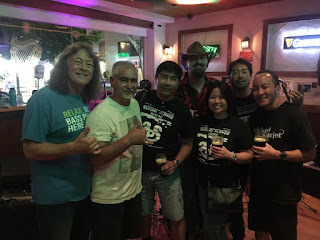 Much mahalos go out to Flyin' Lanaian and Neko Sixx for allowing me to crash at their place, and to everyone else I was able to hang out with. It was a way-too-short trip. Hopefully I can stay longer the next time.
Posted by Brian Tashima at 6:25 AM