I Can Hack You Back In Time, Just Like A Time Machine

One of the neat things about having a blog like this, or a journal, or a diary, or whatever, is that it can help you travel though time. I mean, not literally, of course, but if you've been doing it long enough (writing a blog, not time travel), you can go back and see what it is you were thinking and/or doing at this same time a year or more ago. So strap on your Power Gloves, my friends, and take a journey with me. It's hacking time! 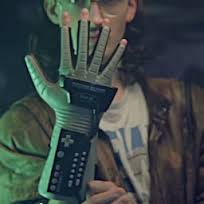 October 22, 2015
"Book Two Cover Unveiled!"
Man, has it been a year already? In this post, I officially revealed the cover art for Mystery of the Moonfire along with the back cover copy. It was the culmination of a long and awesome journey that, at times, seemed like it would never end. And now I'm almost ready to do a similar announcement for Book Three!

October 23, 2014
"Believe Me, I Am Still Working On Book Two"
Speaking of a long journey, if you go back another year, you will see that I was still wandering in the proverbial darkness with regards to writing Book Two. Pretty hilarious, right? And by the way, that Kikada reboot movie was disappointingly terrible.

October 24, 2013
"Quick Hits"
I was still talking about Book Two here, saying that it was "making progress." Ha! I also just bought my awesome Hylian Shield and Master Sword, which I have yet to proudly hang up on my wall since I've been too bulazy (busy + lazy) to drill the requisite holes and such. Yes, that's three years and counting now. I also mentioned that Second Player Score's first album was coming out soon, and now we're about to release our second one!* So maybe by album four or so I'll finally get around to mounting my Zelda gear in a place of honor where it belongs. We shall see.

October 22, 2012
"Monday Awesomeness Alert and Book Two Status Update"
Wow, I was posting on a Monday back then! And I was still talking about Book Two, bahaha, saying that it was "coming along." At the time, I was at 4000 words. How cute. Heck, I'm over 4000 words on Book Four already! Which I guess makes this post a Book Four Status Update? Hmmm...sure, why not.

* Speaking of which, be sure to tune into Neue Regel Radio next Tuesday at 10am Pacific, when I'll be doing a live interview to talk about said album!
Posted by Brian Tashima at 6:26 AM