A Nerd's List of Reasons To Keep On Going

Hi, I'm Art. Some of you may know me as the owner of Art's Guitars, where my pal Joel Suzuki used to work. Some of you may know me as the drummer in Joel's band, or as the guy dating his mom (I know that might sound a little weird, but in case you weren't aware, Joel's mom and I are both 40-something-year-old divorcees). Here's a picture from the movie The Rocker, which sort of approximates Joel's band in that both feature a middle-aged drummer - they have Rainn Wilson, Joel has me - surrounded by incredibly talented teenagers. 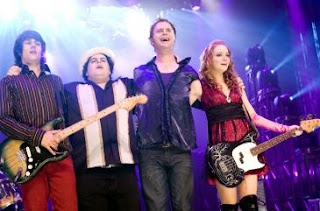 Anyway, I'm apparently the guest blogger this week filling in for Mr. Brian Tashima, who said that he was busy working on something called "Volume Four" (no idea what that is). I was originally going to write a long post about philosophy, or about simulated realities, but then I realized that I'm not really a writer, so I'll just give you a list instead.

See, I believe that as a whole, life is good, despite the numerous hardships we all face from time to time, and that there's always something to look forward to, some reasons to keep on going, even if and when you don't feel like it. Now, the kids in the band and I are all heavily into what is called "nerd" or "geek" culture, so this list will contain some reasons specifically tailored for people just like us. And by the way, this list is by no means comprehensive - it's really just the tip of the iceberg. If you have anything you want to add to it, I'm sure Brian won't mind if you leave a comment or two. Enjoy.

1. Loved ones
2. Spider-Man: Homecoming
3. The Legend of Zelda concert, coming to a town near you
4. Helping others
5. The next Comic-Con
6. Xbox One X
7. Delicious burritos
8. Cat videos
9. Finding out who the 13th Doctor will be
10. The third album by Second Player Score (Brian asked me to include that)
11. The day the Seattle Mariners (or whoever your favorite team is) finally get back to the playoffs (or win another championship, if you're lucky enough to be a fan of a good team)
12. Star Wars Episode VIII
13. Star Wars Episode IX
14: All the Star Wars movies that Disney will undoubtedly continue to produce after that
15. The fact that you are awesome
16. The weekend
17. The sun, if you like the sun, or snow, if you like snow
18. Your next vacation
19. Chocolate (not too much, just enough to keep away the Dementors)
20. Xenoblade Chronicles 2

That's it for now. Thanks for reading!

(Editor's Note: like what Art has to say? You can hear more of his philosophies on life by reading the first three installments of the Joel Suzuki series, listed below.)