Katniss Everdeen Didn't HAVE To Volunteer As Tribute

In the Harry Potter books, Severus Snape spends an awful lot of time being called a coward. But as I'm sure all of you know (in case you don't, spoiler alert), he was actually a triple agent with nerves of steel who basically could have gotten himself killed at any moment if he wasn't careful. As Harry himself said in the end, "One of them was a Slytherin and he was probably the bravest man I ever knew." 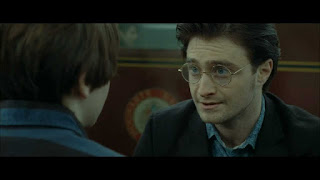 I started thinking about bravery and courage a lot just prior to the release of Volume Three. In that book there's a scene where Joel risks his life to help his companions and someone says "that was very brave" followed by someone else saying "or foolish" (we'll compare the two in a future post).

Lots of fictional characters exhibit a high degree of courage. If they didn't, you probably wouldn't have a story, or at least not one quite as exciting. I mean, Katniss Everdeen didn't have to volunteer to take her sister's place as a tribute. Clara Oswald didn't have to keep traveling with the Doctor. Luke Skywalker didn't have to go with Obi-Wan to Alderaan, he could've just changed his name - finally - and moved to Mos Espa or something.

But are these actions realistic? Would actual people actually do things like that? Granted, you take a risk anytime you step outside your front door (or even when you don't), but for a lot of people, the idea of purposefully, willingly, knowingly placing yourself in harm's way is more than a little foreign. The instinct to avoid danger and survive is a pretty strong one.

After thinking about it some more, though, I quickly realized that the obvious answer is: yes. Most definitely yes. There really are people - actual, real-life people - who make the choice to put their lives on the line, sometimes on a regular, daily basis. I decided that I wanted to explore this phenomenon in more detail, so I began reaching out to some of these people and asking them about why they do what they do. This series will contain their stories.