Editor's note: we interrupt the ongoing series about courage in fiction and in real life to bring you this special announcement.

Hello! It's July 2017, the five-year anniversary of the Joel Suzuki Series. Can you believe it's been five years already? It feels like just yesterday that Volume One debuted as "Secret of the Songshell, Book One of the Spectraland Saga" with launch parties at Thatcher's Coffee and Ash Street Saloon.
It's also the five-year anniversary of this blog, which started with a post called "Discovering Bands." Ah, they grow up so quickly, don't they?

Anyway, as part of the anniversary celebration, I'll be doing a couple of public events this month. First up is the inaugural Words and Pictures Festival at Cascade Park Community Library this Saturday, July 15th from 11am-330pm.

I'll be there with a bunch of other awesome local authors and illustrators doing readings, talkings, signings, jugglings, and cool skateboard tricks. Okay, maybe not those last two. Oh, and we'll also have books for sale! The library is located at 600 NE 136th Avenue, Vancouver WA.

Then next on the schedule is Family Literacy Night at the Barnes & Noble in Eugene, Oregon on Thursday, July 20th from 6pm-8pm. I'll be joined by fellow local authors Roslyn McFarland and Gwendalyn Belle as well as super special guest Torin Tashima! 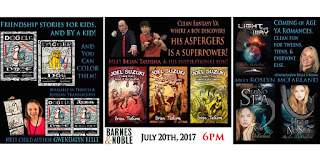 If you live in that area - or even if you don't - it'll be a great opportunity to meet the inspiration behind the Joel Suzuki Series (as well as that other guy who happens to be writing it.) The Eugene Barnes & Noble is at 1163 Valley River Drive, Eugene, OR.

So come on out and say happy birthday to Joel and Felicity!

In case you can't make it to these events or want to buy your copies ahead of time, Volumes One, Two and Three of the Joel Suzuki Series are available at these fine links: